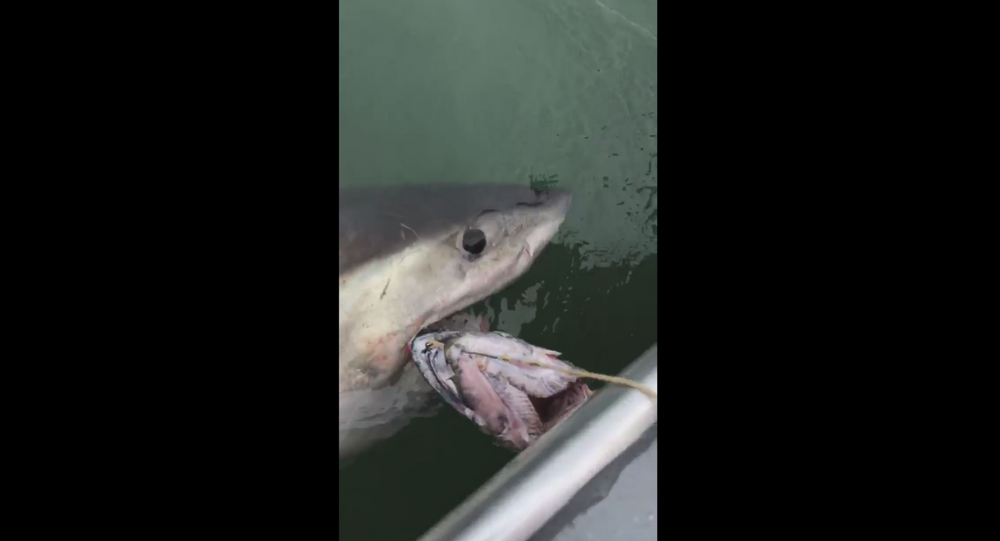 A group of fishermen received the shock of a lifetime over the weekend after they discovered that the powerful fish they’d managed to hook in San Francisco Bay was actually a great white shark.

The sport fishing crew were traversing the waters near the infamous Alcatraz Island at roughly 11 a.m. local time on Saturday when the line cast by Joey Gamez, the boat captain and owner of Golden State Sportfishing, began to see some action.

According to ABC News, Gamez at first believed the fish he was fighting with was a large sevengill shark, one of two species that his crew had intended to catch during their morning expedition. They were also looking to find soupfin sharks.

Video shared on Gamez’s Facebook page captures the arduous battle that all six fishermen aboard the vessel were entangled in, proving that the struggle for this group of experienced fishermen was all too real.

The shark’s strength eventually led to Gamez reeling in his boat’s anchor, a move which subsequently saw the boat dragged for miles. “It pulled us with the current for two miles, then we hovered over it for 20 minutes or so,” the captain told Fox News.

“I just gave it all I had, just tried to bring her to the surface,” he added before noting that he was “super surprised” at his catch. “It was like winning the lottery.”

Gamez noted in the video that this was the first time that he’d had to pull anchor with a shark.

The remainder of the nearly 10-minute recording shows the group’s efforts to comply with California state law and release the massive shark back into the water. Having been more concerned with cutting the shark free at the time than measuring it, the 42-year-old fisherman suggested to ABC News that it was anywhere from six to eight feet long.

“I really didn’t get a good look at it,” he told the station. “I was kind of worried about getting it off the hook.”

The shocking catch ultimately swam away from the fishing crew after the bait was cut loose.

“It almost pulled me into the water at one point. It’s the biggest thing I’ve ever fought in my life, that’s for sure,” Gamez told CBS News. “We’re in their home, so it’s a scary thing, but it was an adrenaline rush, for sure, for everybody on the boat.”

A series of photos later shared by the team reveals that the sport fishing crew did manage to take home a catch of at least six soupfin sharks.

A day after the sharky tango, Gamez went back out on the bay. He told ABC News that he did not spot any great whites.