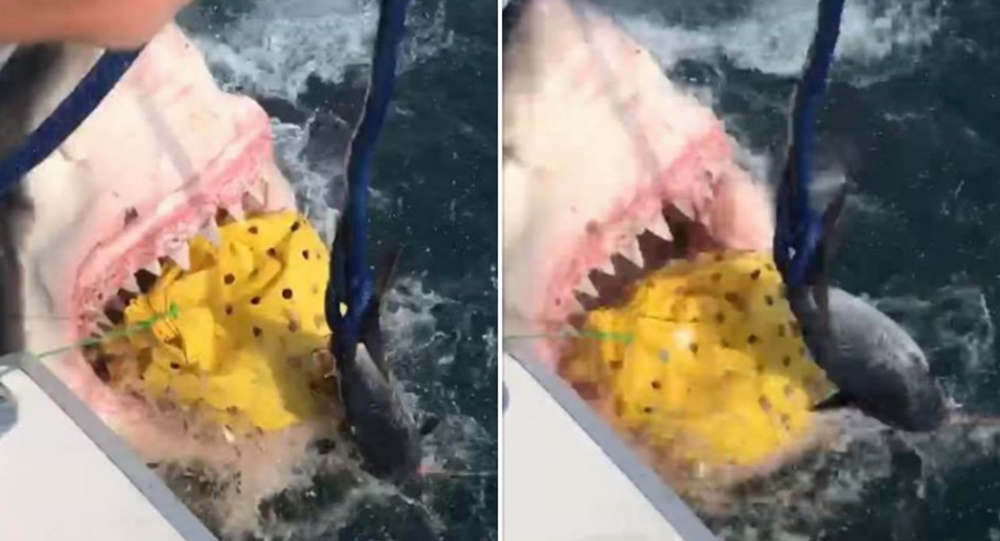 On Monday, a group of fishermen had a terrifying yet apparently exciting encounter with a huge great white shark off the coast of New Jersey.

The incident was captured on video by fisherman Jeff Crilly, who is also the owner of Big Nutz Required II, a 31-foot Bertram sport boat. The footage shows the shark circling around the fishing boat, roughly 30 miles southeast of the Manasquan Inlet, before it begins hungrily chomping on a bag of bait.

The fishermen can he heard yelling “This thing is huge!” as well as “Holy s**t! Look at this thing!” and “That was the coolest f**king thing I’ve ever seen.”

“Best day ever on the water!!!” Crilly wrote in a caption accompanying the videos posted on Facebook, which have since gone viral. “On my boat the Big Nutz Required II. Monster great white comes right up to the boat about 16ft long. Eats the chum bag and marks the boat!!!”

According to the fishermen, they had been on the water for almost 13 hours before the  shark, which Crilly estimates was 16 to 18 feet long, made an appearance.

"It circled two or three times before it actually came at us aggressively," fisherman Sean Smida told WCBS-TV.

“And then it just snapped like that. It attacked our chum bag, tore the chum bag off the boat,” fisherman Raymond Kerico added.

In interviews with press, Crilly said that the shark was more than half the boat’s size. Luckily, no damage was done to the vessel, apart from a few scratches to the stern.

“We’ve fished for sharks a lot and never seen anything like that. We were amazed by how big it was,” he said. “It was harder to guess the weight because we had nothing to compare it to, but it was probably about 2,000 pounds,” Crilly told WCBS.

“I think it could’ve easily, if it wanted to, slid into the boat. It was like being in the movie ‘Jaws.’ That’s the closest thing to it. Like, this is exactly what it was,” Crilly told WCBS. “We wanted to be there and touch it, but at the same time we were backing away, because we didn’t know what it was gonna do.”

After a few minutes of snacking on the bait, the shark swam back into the ocean.