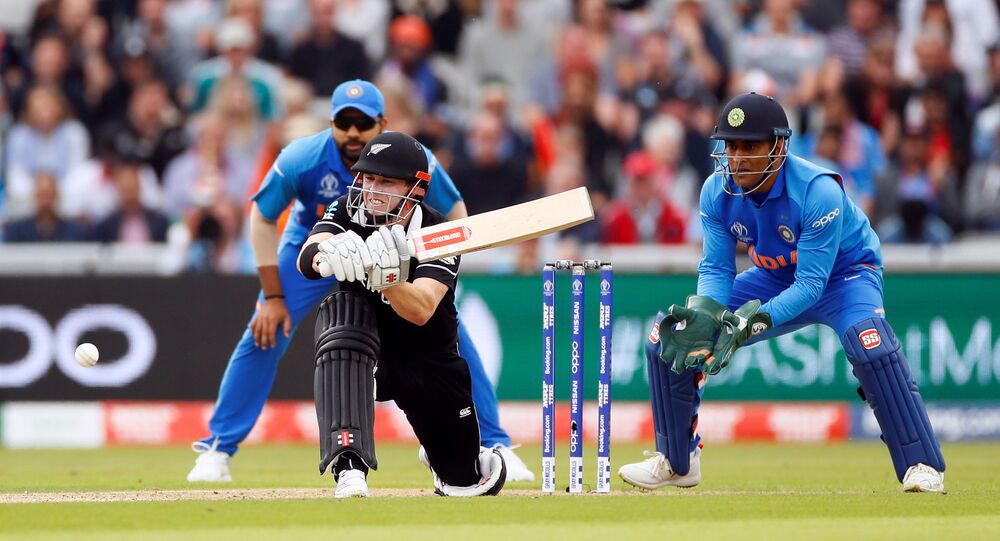 New Delhi (Sputnik): If social media trends are anything to go by, India came to a standstill on Tuesday, with over 100,000 tweets within two hours of the start of the semi-final match being played between India and New Zealand in the ongoing ICC Cricket World Cup.

India which topped the tournament’s points table is facing fourth-placed New Zealand at Manchester, for the first time in the ongoing World Cup tournament.

On Tuesday, India was forced to bowl first in the match, after New Zealand won the toss.

India walk out for the anthems, a billion hopes on their shoulders.#CWC19 | #INDvNZ | #TeamIndia pic.twitter.com/xE1BshFRJ0

The previous encounter between the two teams had been washed out in the group stage match at Trent Bridge.

Meanwhile, Twitter was flooded with wishes pouring in from fans who were rooting for their team to cruise through to the tournament's finals.

Politicians across party lines sent their messages through Indian Sports Minister Kiren Rijiju- many sending personal letters to the team. Celebrities were also cheering for the Men in Blue to win.

Good luck to our boys for the semi-final against the Kiwis! Hope to see another outstanding performance by #TeamIndia today.#INDvNZ

We are winning today. #INDvNZ #Confidence

Netizens also seem to be in a full-on world cup frenzy, with users posting amusing memes on how they were skipping work to get a glimpse of the enthralling encounter. #INDvsNZ had over 82k tweets and was by far the top trend in India.

Even the metro signboards couldn’t be spared from the cricket fever.

The Virat Kohli-led Team India seemed to have the blessings of all, from players who missed the cut for the World Cup final squad, to fans of arch-rival Team Pakistan.

2 games away from glory & making history. Let’s do this!!With rain forecast, this could be start-stop match. Both captains will have to be on top of their games & reworking their strategies. Bring it home, #TeamIndia #INDvNZ #CWC19

Show us a good chasing today.#INDvNZ

Meanwhile, a fan shared interesting footage of an Under-19 World Cup Match from 2008, underlining how uncanny it is that both Indian Skipper Kohli and New Zealand Skipper Kane Williamson were captains of their teams back then. India on that occasion managed to get the better of the Kiwis, with Kohli taking Williamson's wicket.

During the Semi Final of U-19 World Cup 2008. Guess who gets the Wicket of Williamson in the the match. Its none other then Virat Kohli!!!

The Finals of the Cricket World Cup will be in London on 14 July.