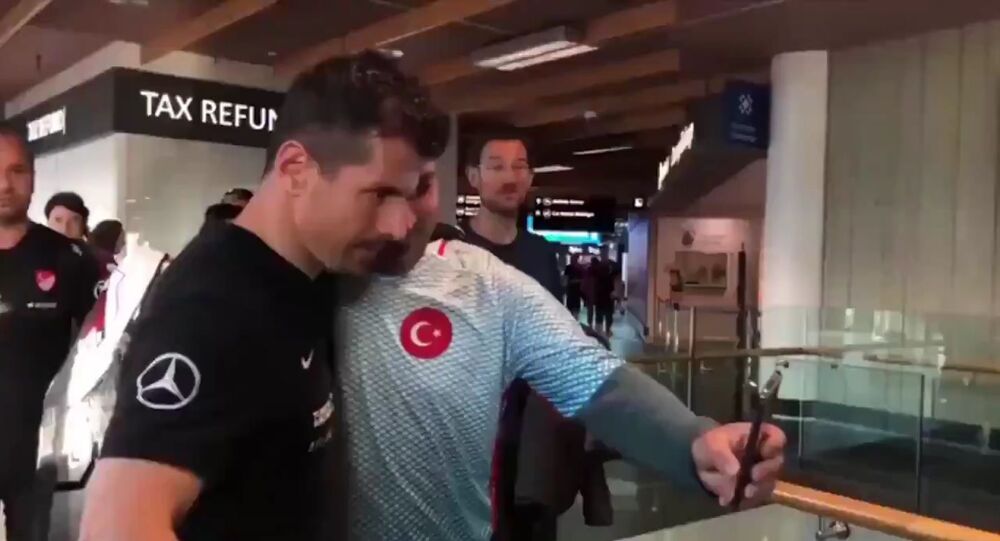 Footage from Reykjavik airport shows a person posing as a journalist holding a toilet brush to a Turkish player's mouth as if it were a microphone.

The Turkish national football team arrived in Iceland for a Euro 2020 qualifying game and received a scandalously rude welcome, sparking an outrage of international proportions.

After landing at the country's Keflavik Airport following a six-hour flight, the Turkish team were not allowed to leave for over three hours. The Icelandic airport officials refused to offer a reason for the delay, and also insisted on searching the bags of all players and staff.

According to the Turkish news channel EHA News, the Icelandic officials went about searching the Turkish national football team’s bags one by one, thus deliberately slowing down the process. To add fuel to the fire, immigration control took a very long time to process the passports of players and staff.

#UPDATE: Airport security in #Iceland, searching turkish national football team’s bags one by one and deliberately slowing down the process according to reportspic.twitter.com/8tZNzRHOKj

​When the Turkish team were finally allowed to exit the airport with their luggage in tow, another incident happened. While speaking to the media on his way out, Turkish captain Emre Belozoglu was accosted by a man who held a toilet brush to his face and pretended it was a microphone.

Belozoglu seemingly didn't notice it (or chose to ignore the provocation), as he went on to explain that the entire team was unnecessarily searched more than once.

“What they have done is disrespectful and rude! We have been waiting here for three hours. They took everyone's bags and even everyone's cosmetics. They searched it again and again. We flew for 6.5 hours and we've waited for three hours”, Yilmaz said, as quoted by the news outlet TRT World.

Once the team is in, a supposedly Iceland citizen, who poses like a journalist, points a toilet brush to a prominent player like it is mic.

​While Icelandic officials and the UEFA have yet to comment on the incident, it triggered a huge outrage on the social media, as thousands of Turks rushed to vent their anger in a makeshift campaign, #TurksAreComingForIceland, quickly making the hashtag the most popular worldwide.

😮 | After a person handed a toilet brush to turkish national footbal team player in a airport in #Iceland, #Turkish twitter users started a campaign to find the man behind the disrespected action.#TurksAreComingForIceland hashtag is number now #1 in worldwide pic.twitter.com/O6jMo8Nlsq

As Turks were seething with anger and yearning for retaliation, some Icelanders were quick to offer their apologies.

“Dear Turkey. The guy with the brush is not Iceland media. Greetings from the Icelandic media,” star sports journalist Henry Birgir tweeted.

Dear Turkey.
The guy with the brush is not Iceland media.
Greetings from the Icelandic media. pic.twitter.com/Ei203zgnWB

One ​Icelandic man, Benedikt Gretarsson, admitted to receiving some 20,000 threats and hate messages and wrote a tweet explaining that “the idiot with the brush” was not him and assuring the Turkish fans that he had “nothing but respect” for their players and their “great nation”.

The idiot with the brush is NOT me. I have nothing but respect for your players and your great nation.

​“Turkey fans, we don't know who this airport guy is, he’s probably some random tourist making a joke, we apologise for this, we were hoping to welcome you well, it would be nice if you could stop sending hateful messages,” another Icelander wrote.

According to Turkish media, Turkey intends to present a note of protest to Iceland over the incident. It was emphasised that this delay occurred despite the official correspondence with the airport management promising a smooth handling of the football players. Turkish Foreign Minister Cavusoglu is expected to call his Icelandic counterpart for an explanation of the situation.

On the football pitch, Iceland meets Turkey on Tuesday.