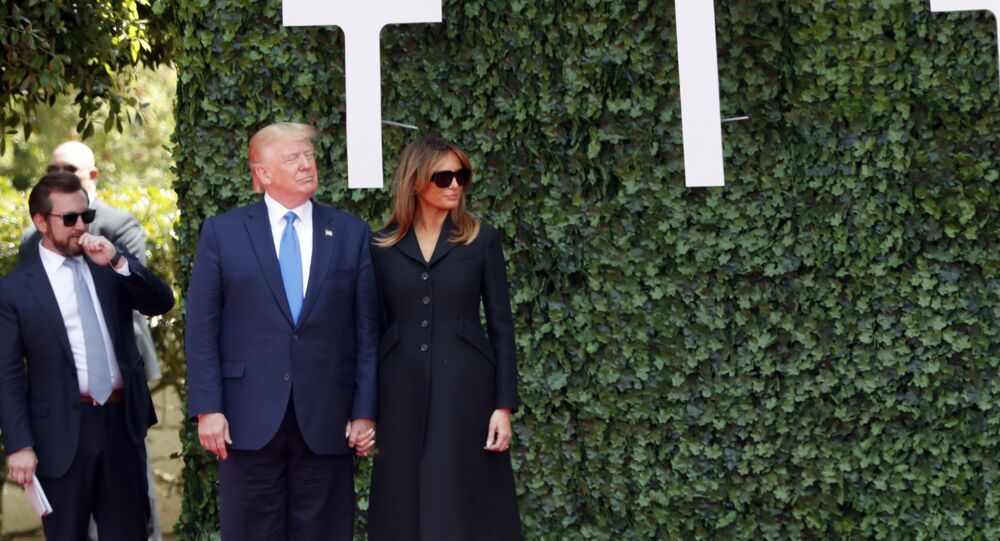 Fans have once again put forward claims that Melania Trump used a body double as she accompanied her husband on a foreign visit to France’s Normandy for the the 75th D-Day anniversary was commemorated on Thursday, 6 June.

As part of their European tour, the US first couple joined France’s Emmanuel Macron and his better half Brigitte, to pay their tributes at the Normandy American Cemetery, where as many as 9,388 US troops who tragically lost their lives during World War Two are buried.

Netizens rushed to assume that it was not FLOTUS standing by Trump’s side as soon as photographic and video reports of the solemn ceremony were released online.

The Slovenia-born former model, who was shown kneeling at the cemetery and laying a wreath, seemed to raise suspicions among online observers who noted peculiarities in the appearance, body language, and body positioning of FLOTUS they found consistent with the use of a body double.

This thread on how to spot fake Melania 😝…and it's actually fitting that y'all accept a body double, secret service agent that wears sunglasses and a wig as the first lady.
What a bizarre world we live in😭 https://t.co/Uv5Ykq1wCE

“That’s the secret service agent posing as FLOTUS,” one wrote voicing a recurrent rhetoric, with another generalising the approach and claiming her wearing glasses hints at the fact that the person in the footage is her body double.

“Anytime you see her wearing glasses it’s the body double,” he argued.

Melania has a body double who is a secret agent. The tweet from Naima shows u how to tell when it's her or the double.

“You can also notice how Trump is super-handsy with her like never is with Melania,” a different netizen quipped, while another suggested along the same lines that the real Melania "never touches him:"

That looks like it’s the Melania body double. The real one never touches him.

“Melania’s double? Is that why the French First Lady is keeping her distance?” another Twitterian commented, tongue-in-cheek.

The body double conspiracy theory is far from being new: it virtually dates back to October 2017, when actor and comedian Andrea Wagner Barton suggested a body double replaced her for a public appearance. While many argued the woman’s facial features are far different from Melania’s, all the rest eagerly speculated on the potential security reasons for the alleged decision to pick a body double.

I thought we all knew Melania has a body double. From like day 1 they been using one