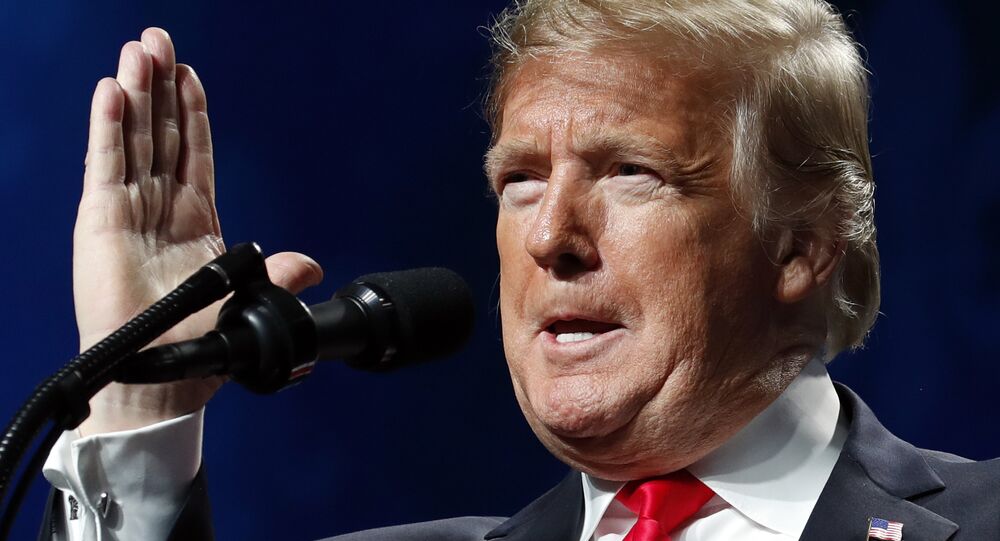 The president and first lady gave a speech in Atlanta, Georgia on the opioid crisis, an epidemic which causes tens of thousands of opioid deaths every year, including over 72,000 in 2017 alone.

In his remarks at the Prescription Drug Abuse and Heroin Summit, formally aimed at addressing ways to combat the spike in addiction to prescription pain medications and illegal drugs such as heroin, Trump mentioned "a lot of progress" in stopping the national health emergency affecting the United States.

"Each year, more than 70,000 precious American lives are lost to the opioid and drug crisis. In my opinion, the number is much higher than that, "Trump said, noting that his administration had declared the problem to be a "nationwide public health emergency,"  and pointing to the securing of $6 billion in new funding to combat the problem, which Trump boasted was "the most ever."

© AP Photo / Pablo Martinez Monsivais
Donald Trump Praises China For Making Drug Dealers 'Pay the Ultimate Price'
In addition, Trump talked about "billions and billions of dollars" in spending on law enforcement, including new military equipment, efforts to build a wall on the Mexican border, the importance of jobs and economic growth in combating the crisis, and treatment options for drug addiction among prison inmates.

Not everyone appreciated Trump's constant asides and impromptu remarks, which included comments on how "hot" law enforcement had become under his presidency, the importance of "great dogs" in border patrol, the lovely white dress Melania wore when Trump announced his run for the presidency in 2015, alleged unfair trade deals with European drug companies, and his pivoting to talk about the system that had been "rigged" against him being similar to efforts to stop a medical system that's rigged "against our great seniors."

As expected, Trump's critics came out in force against him, calling his speech weird and out of focus, and accusing him of acting "like he's on drugs" himself.

Trump and Melania were in Atlanta today talking about the opioid crisis. Because if there’s anyone to talk about the severity of this issue, it’s the man who acts like he’s on drugs and the woman who wishes she was.

LOL — During his opioid abuse prevention speech, Trump paused so people could applaud after he bragged about how much government is spending on "Just say no" ads, but the audience responded with total silence. pic.twitter.com/W05GUnJBic

What is the Idiot on? pic.twitter.com/Okh1rkHM6B

And now Trump is stoking fears about migrants during a speech that's purportedly about opioid addiction prevention.

"Drugs are being gotten by us," Trump says, tentatively, pivoting to a pitch for his border wall. pic.twitter.com/8ZcPNol51G

Trump’s showing firsthand why you shouldn’t do drugs.

The president found his defenders, however, with one user writing that now that the "fake Russia Collusion and Trump impeachment hoax" has been quashed following the release of the Mueller report, maybe the US can now focus "on solving real issues affecting real Americans."

TY! I hav a brother suffering the Opioid Crisis. He was such a great, smart, driven kid; now he’s facing homelessness or death. Instead of focusing so much on this fake Russia Collution & Trump impeachment hoax, we shuld be focusing on solving REAL issues affecting REAL Americans

Too many of us have been personally touched by drug addiction and the opioid epidemic. We must unite to stop this America killer. #RxSummit

Others touted the importance of dealing with the border crisis as a means to solving the drug crisis.

Sara we have a leader who is making a difference in people's lives!

Others still attempted to focus on the crisis itself, debating policy, such as the use of faith-based organisations to help fight the crisis, and other issues.

Going with the “Wish you Luck” approach to the opioid crisis.

The vast majority of 28 day rehabs (charging thousands of dollars a month) rely exclusively on 12 step models that are free in hundreds of places daily.