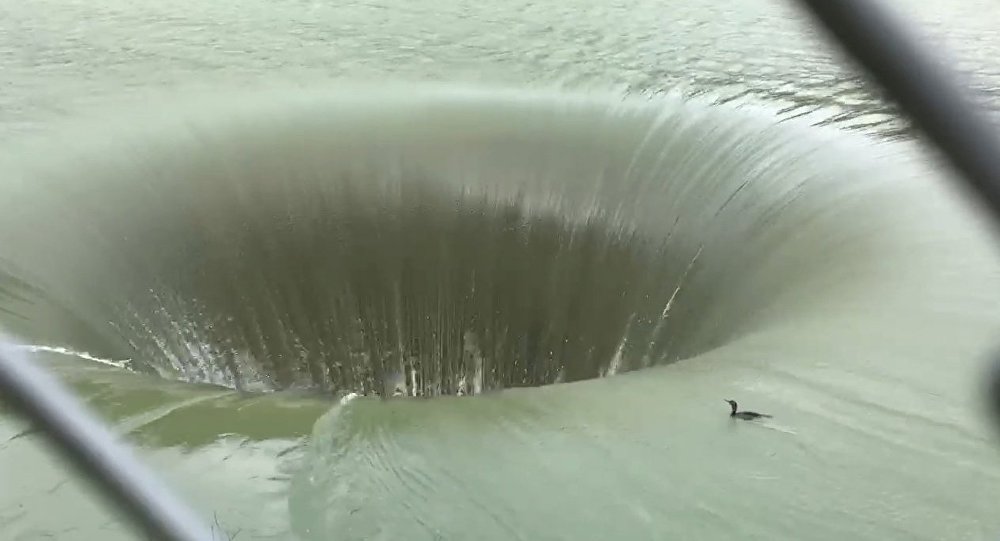 The matter of the survival of one little duck facing the abyss of Lake Berryessa's famous spillway caused both netizens and officials to debate whether the bird managed to escape the current.

The video was shot by Rick Fowler, who spotted a mallard swimming towards the hole. A group of viewers clung to a chain-link fence, watching the bird swimming closer to the spillway. "Oh…wow!" one man can be overheard yelling in the video as the duck fell into the more than 200-foot-deep (18-story) artificial spillway in the largest lake in Napa County, which was created by the Monticello Dam.

READ MORE: Like a Boss: Duck Shows Off Smooth Landing on Icy Pond

"Duck took a wild ride but did make it out on the other side!" she captioned the video.

Wildlife experts, however, weren’t so sure that was the case. Brionna Ruff, a spokesperson for the Bureau of Reclamation, a federal agency that owns the reservoir, said it's likely the duck didn't survive.

"From what I understand that water is going down really fast and when things come out the other side… I don't want to get really graphic. The chances do not look good for the ducky," Ruff told the San Francisco Chronicle.

Melissa Vignau, a project supervisor for the Solano Irrigation District, told ABC 10 she also doubts the duck made it out of the hole, as the “velocity of water going through there would have torn it in pieces.”

Rick, however, witnessed the scene and insisted that the duck flew out of the “glory hole” without a scratch.

"It shot out of there like a bullet," he told ABC 10. "It flew through the turbulence and came out of the water shaking water like it didn't [know] what had happened."

Twitter users also believed in the birdy. While some suggested that it was time for this little fellow to “duck,” others noticed the duck’s composure in the face of almost certain death.

That duck crossed the event horizon!

Plot twist: It's the same duck.

Like a Boss: Duck Shows Off Smooth Landing on Icy Pond

Ohh Wait, 'Get the Duck out of My Horse' Messages - Thing of Past?