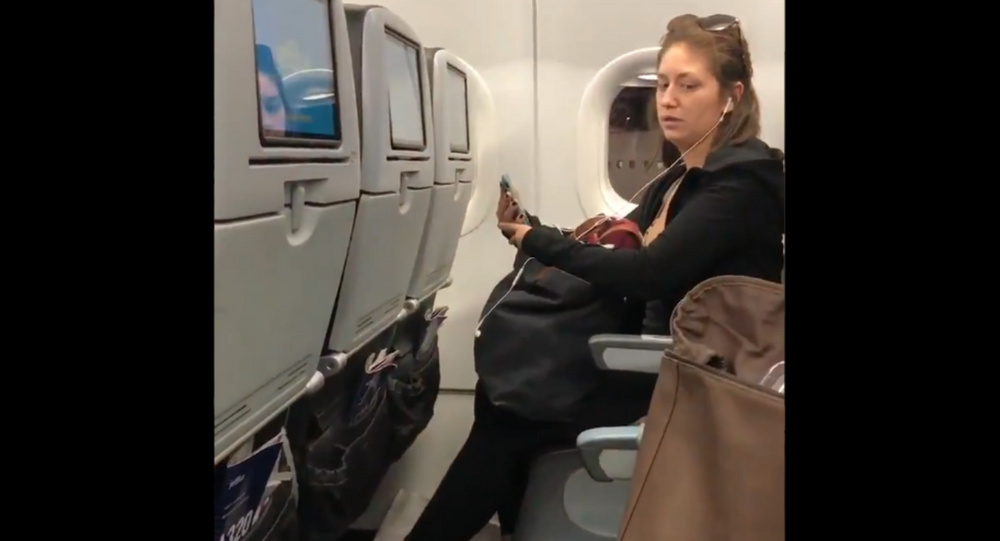 Video footage of a JetBlue passenger going on a profanity-laced tantrum over being seated next to a toddler has gone viral.

According to reports, 32-year-old Valerie Gonzalez was waiting for a JetBlue flight to take off from Fort Lauderdale-Hollywood International Airport to Las Vegas Thursday when she lost her temper and began swearing and spitting — because she didn't want to sit next to a three-year-old.

​The arrest affidavit, which was obtained by Metro News, states that Gonzales said, "I'm not sitting next to a f**king three-year-old. I've been drinking all day."

In a video of the incident, which was shared on Twitter by fellow passenger Orlando Alzugaray, Gonzales can be seen using the FaceTime application on her phone, talking to someone while claiming that she "didn't do anything wrong." At that point, she had allegedly moved to a different seat that had not been originally assigned to her.

When she notices other passengers around her filming her, she spits on the passenger sitting in front of her after yelling, ""Oh, you want to f**king tape me, make this viral b***hes?"

"Did she just spit on you?" a shocked woman can be heard asking in the recording.

Gonzalez then gets up from her seat and gathers her belongings.

"Make this viral! You wanna make this viral, make it viral. What the f**k did I do? I called someone old ‘cause they were?" she yells. "My mom's going to be so proud of me tomorrow. I don't give a f**k. I didn't do anything, I sat down in my seat. And I asked to go somewhere else because they were being c**ts. But I get kicked off."

"I'll get my bags. I'll take my f**king s**t," she adds while blowing kisses at the various cameras filming her.

At this point, a JetBlue employee can be heard asking the airport to call the Broward County Sheriff's department.

According to Metro News, the woman tried to board the plane again after exiting the terminal. When a JetBlue employee tried to stop her from entering the plane, she hit the employee over the head.

Gonzales was arrested at the Florida airport and was taken to Broward County Main Jail, where she was charged with battery.

"On Thursday, February 14 — during the boarding of flight 7 from Fort Lauderdale to Las Vegas — crewmembers reported a disruptive customer onboard. Local law enforcement was called, and the customer was removed from the flight. Additional details should be directed to Broward County Sheriff's Office," the statement read.

JetBlue and the Broward County Sheriff's Department did not immediately respond to Sputnik's request for comment.

Only the Best Slurs: Trump Repeats Racist Rant Against US Senator