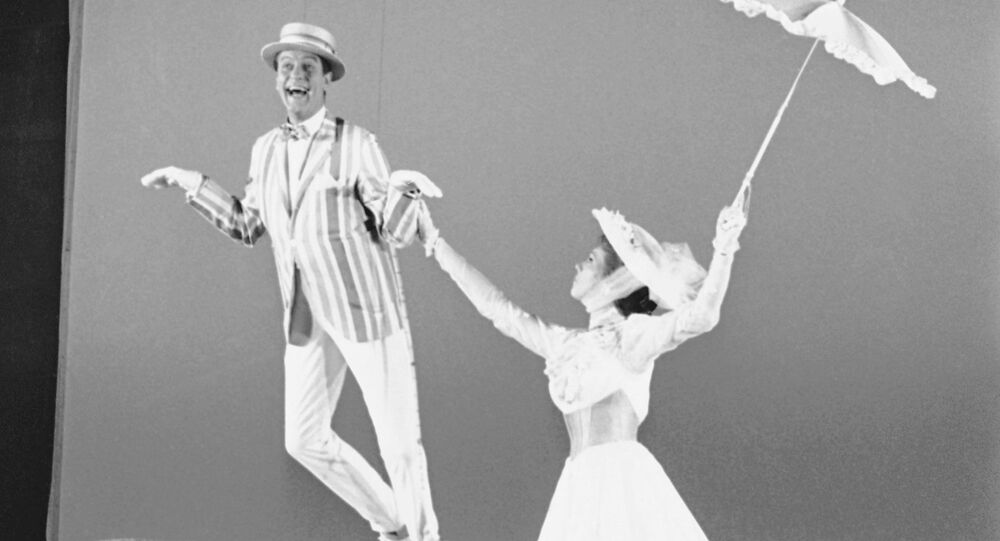 The online debate started after a New York Times arts section contributor claimed that the beloved 1964 children's film had secret "racist" undertones in a classic scene where the main characters get covered in soot during a musical number featuring Dick Van Dyke as a chimney sweep.

Daniel Pollack-Pelzner, an English and gender studies professor at Linfield College and New York Times contributor, kicked off the debate in a piece dubbed 'Mary Poppins,and a Nanny's Shameful Flirting With Blackface', in which he accused the Julie Andrews character of "blacking up" and cited passages from P.L. Travers' original Mary Poppins books which he said spewed racism.

Pollack-Pelzner singled out the line "Don't touch me, you black heathen", uttered by a housemaid in the original 1943 Mary Poppins story, and argued that the character Admiral Boom's line "We're being attacked by Hottentots!", which made it into the 1964 Disney adaptation, was similarly racist, as it referred to an obscure slur against black South Africans. "The 1964 film replays this racial panic in a farcical key," the columnist lamented.

© AP Photo / Phelan M. Ebenhack
Africa Revolting Against Disney Using Phrase 'Hakuna Matata' in Commerce
Digging into the novels, including the first Mary Poppins book, published in 1934, Pollack-Pelzner found more evidence of racism, including reference to a "scantily clad 'negro lady'," and use of racialised minstrel slang, which P.L. Travers revised in the 1980s to remove the potentially offensive dialogue.

As for Disney and its musicals, the NYT contributor suggested that "blackface minstrelsy, in fact, could be said to be part of Disney's origin story." As evidence, he cited a 1933 Mickey Mouse short in which the cartoon mouse blacks his face with dynamite to play an unruly black child.

Online, the vast majority of readers didn't seem too impressed with the columnist's argument, with his piece attacked both for its politically-charged style and its "mediocrity", with some even questioning whether this was a satire piece. "This is peak identity politics idiocy," one user wrote.

This is peak identity politics idiocy: "The 1964 film replays this racial panic in a farcical key." It's not like chimney sweeps don't, oh, I don't know, GET DIRTY DOING THEIR JOBS… https://t.co/HrMmtEvWGi

Fantastic I was wondering when another white liberal would make a racist accusation at something innocent again.

I think your article is ridiculous. Another example of The Times’ descent to mediocrity in arts coverage.

Was this written for @TheOnion?

Others challenged Pollack-Pelzner on practical grounds, suggesting there was no actual evidence in the Disney film to back up his claims, and encouraging him to realise that when a person is around coal products, they'll get sooty. Others gave him some historical context on London during the Industrial Revolution, which the film was trying to replicate.

It's not. Stupid investigation. You know in this scene she was dirty having just been in a chimney correct? you know what chimneys contain right? if anything she should be more covered in soot. pic.twitter.com/WX1zWmGaFd

Most British working class ppl had one bath a week, normally Friday night. Father normally went in first then the mother and children, ending up with the youngest. It is the origin of the phrase throwing the baby out with the bath water. Now get a brain.

Some users simply trolled the author, suggesting he should now investigate "hidden" themes of misogyny, racism, homophobia and animal rights in works including Winnie the Pooh, 2001, a Space Odyssey and The Jungle Book.

This was great! Can’t wait for your upcoming article on Winnie the Pooh misogyny.

I think Hal in 2001: A Space Odyssey was a racist homophobe

Would you plz evaluate the popular Disney Jungle Book (due for reboot)- may be some animal rights/ race issues there as well — a tense admixture of "cultures" which is confusing at best, and potentially racist at worst. I can't find them but you might- thx

Pollack-Pelzner took the criticism in stride, panning his critics as being "alt-right". But his response was also flooded in criticism, with users from across the political spectrum saying it was his "ridiculous" argument, not their political affiliations, that upset them.

I don't know if its so much that they "love Mary Poppins" as much as they despise a New Yorker article based completely on a false premise.

Maybe it makes you feel better to call those who disagree with your article “alt-right,” but that’s, in most cases, almost certainly not the case. Anytime you write an article as insanely ridiculous as this one, expect justified criticism from decent people.

I'm not alt-right. If anything I'm somewhere to the left of Hillary Clinton and Barack Obama. But your article is ridiculous… for so many reasons.

My social policies are on the left and I think this is the most ridiculous thing I’ve ever read.

Mary Poppins Would Be Jealous: Umbrella Drone Floats Through the Sky