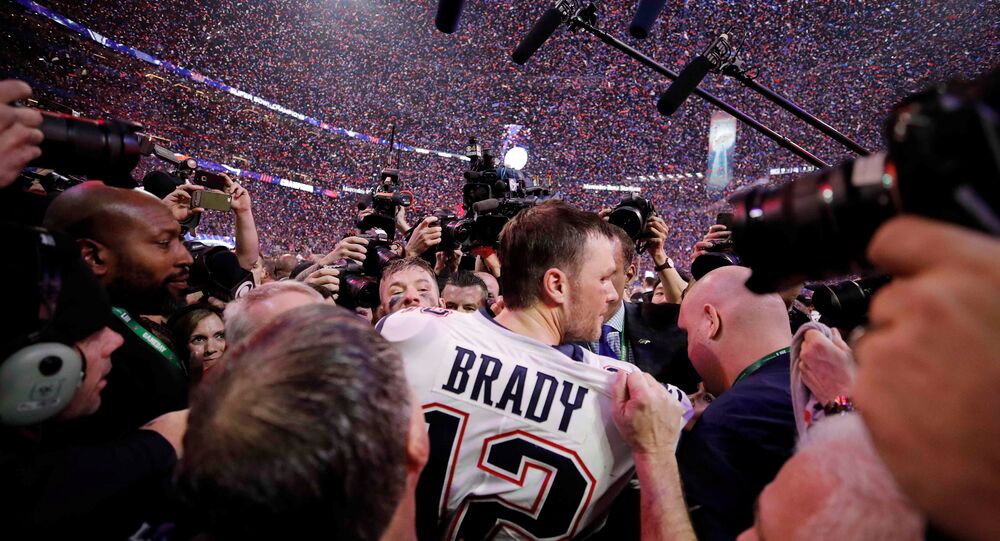 While the game, perhaps, wasn't the most impressive in Super Bowl history, it predictably grabbed the spotlight on social media. The Patriots’ victory turned into meme fodder in no time, with jokes pouring in about Adam Levine’s shirtless half-time performance and Tom Brady possibly taking over the universe.

The New England Patriots beat the Los Angeles Rams 13-3 in Super Bowl 53 on Sunday. Despite being one of the most-watched TV events in the world, Super Bowl 53 became the lowest-scoring championship game in NFL history.

A long-running tongue-in-cheek conspiracy theory, the so-called “Drake curse”, suggests that the team that rapper Drake roots for is destined to be defeated – and this year’s Super Bowl was no exception.

Drake donned a Rams jacket for the game, and ex-NBA forward Matt Barnes joked that this was the real reason behind their defeat.

The real reason why the Patriots won #SuperBowl pic.twitter.com/uXJF6rhU3T

To some viewers, Sunday’s clash was a yawner.

Through 3 1/2 quarters it sure seemed this way. #SuperBowl pic.twitter.com/XBVstCKRIb

More interesting than 95% of this game has been my cat attempting to catch the players. #superbowl pic.twitter.com/IampbiJ2zn

Tom Brady, the 41-year-old Patriots quarterback who is widely considered one of the greatest players of all time, became the first player ever to grab six Super Bowl rings.

The 🐐…6th ring at 41 years old, just appreciate this man while he still plays. Probably will never see this again, unreal. #SuperBowl pic.twitter.com/ZC0Wwixx0h

And NFL and Marvel fans could not resist making references to Thanos, the comic super-villain who chased Infinity Gems to become omnipotent and wipe out half of the living creatures in the universe.

#SuperBowl “when I’m done. Half of the NFL will cease to exist”. pic.twitter.com/xPQpiPtdPU

His kiss with Patriots owner Robert Kraft did not go unnoticed, too.

ok has he never heard of a handshake???? #SuperBowl pic.twitter.com/WMjgE17ooG

Kraft was not the only one who got a kiss from Brady on Superbowl Sunday — his wife Gisele Bundchen also had her share.

Tom Brady’s fam is about to get it #SuperBowl pic.twitter.com/jLD1JTOqb0

Wedding crashers Maroon 5 performed during the half-time show, but users were quick to spot a striking resemblance between front man Adam Levine’s attire and home décor.

Why is Adam Levine wearing my curtains? pic.twitter.com/ocz2jiDjyJ

wow the highlight of Adam Levine's performance was definitely that his shirt looked exactly like pillows that an alarming amount of people happen to have from Target #SuperBowl pic.twitter.com/UL8WjdpJaY

Perhaps this was the reason he went shirtless for “Moves Like Jagger”?

All the girls during @adamlevine shirtless set pic.twitter.com/aeMByQfZjh

Everybody who didn't get a Spongebob halftime show but got shirtless Adam Levine instead #SuperBowl pic.twitter.com/MOR2ze8LSs

Who did it better? #SuperBowl

Some were bitter about the shirtless performance, however, reminiscing of the controversy that followed Janet Jackson’s infamous nipple slip at the 2004 Super Bowl.

YOU’RE TELLING ME JAMET JACKSON CANT SHOW ONE NIPPLE BUT ADAM LEVINE CAN BE SHIRTLESS?

The world’s most popular vlogger, PewDiePie, who is embroiled in a bruising battle for the YouTube viewership crown with Indian record label T-Series, was also a subject of Twitter gossip.

View From the Top: NASA Shares Satellite Photos Ahead of 2019 Super Bowl