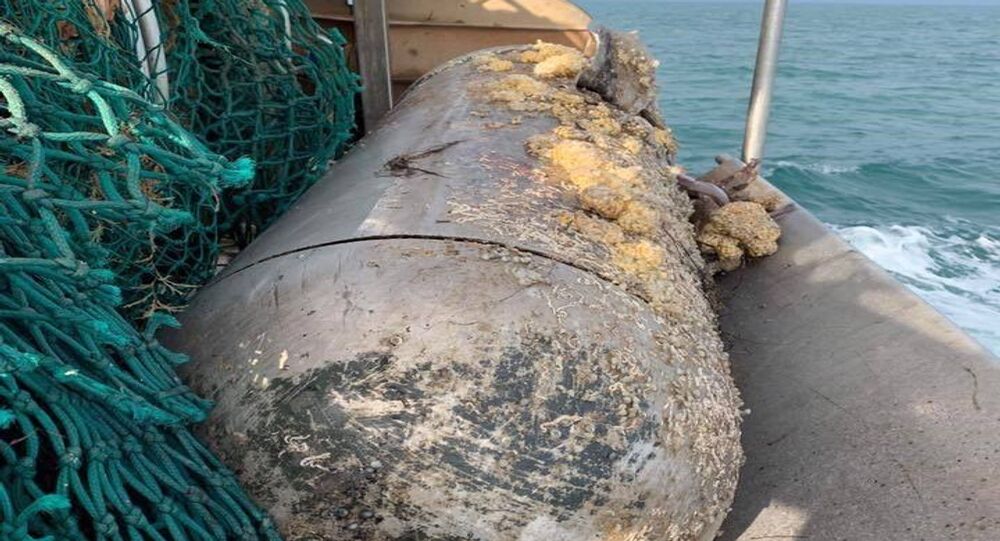 A man, who has called himself a trawler operator on social media, offered fellow netizens to guess what his friend’s barnacled finding, pulled up in nets from the sea bed off the Devon coast, might be.

The Twitter user, claiming to be trawler/MTB operator Brian Davey, posted a picture of a giant metal cylinder online, saying that his friend had picked the thing up and asking others to identify the catch.

​Some immediately recognised a parachute mine and pointed to its potential hazards.

Parachute mine. Throw it back!

one of those landed on my great-grandmother's house, back in the day. everyone was safe in a shelter at the bottom of the garden but the house was splinters and brick dust.

​However, there were those who still had their reservations.

It does look like that mine. I'd have guessed at a gas cylinder of some sort before seeing that.

​Some netizens suggested a small and cynical experiment to find out what the thing was.

Just hit it with a sledge hammer. If it makes a hollow TWANGGG it's a dummy and it's safe. If it blows up in your face and destroys the ship then it's real and hazardous.

​Others provided life-saving advice or put forth their amusing guesses.

Mine to jump off the boat

Looks in better shape than Brexit!

​The original poster didn’t keep fellow netizens in the dark about the fate of the find.

Safely detonated in Torbay.
Quite an explosion.

According to the local outlet Plymouth Live, the suspected torpedo was brought up by a small trawler from the seafloor off the Devon town of Brixham, which resulted in partial shutdown of the village. The boat’s skipper reported his catch to the Royal Navy EOD, who worked on the incident along with police and the coast guard.

The “torpedo”, which was also described as a mine and a fuel tank, was eventually blown up out at sea. The local police have posted footage of the detonated “parachute mine” on their social media account.