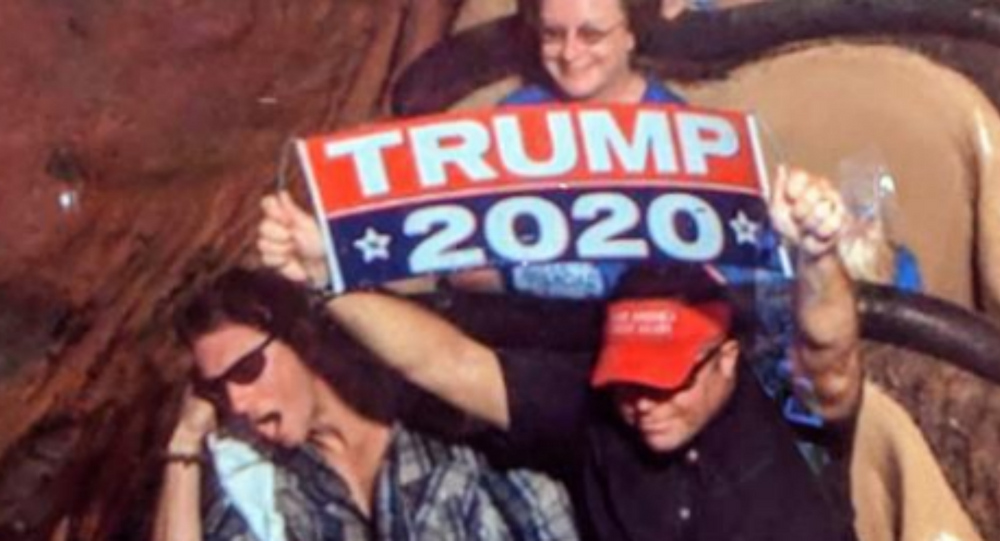 On November 10, 49-year-old Dion Cini shared a photo of himself riding down Splash mountain with a "Trump 2020" sign with the caption, "Trespassed from WDW [Walt Disney World] for holding a Trump 2020 banner on Splash Mountain."

"I held up the sign for two seconds so I can take a picture. You're allowed to hold up signs on Disney rides — cameras, cellphones, and other stuff like that. People have been doing it for years. They just kicked me out 'cause of the context of the sign," he added.

According to the park's policies, "unauthorized events, demonstrations or speeches, or the usage of any flag, banner or sign for commercial purposes, or to incite a crowd" are prohibited. In addition, any items Disney deem "harmful" or "disruptive" are also prohibited.

"Walt Disney World welcomes all Guests to enjoy our parks; however, demonstrations and the display of signs and banners is not permitted on the premises," a Disney spokesperson said in a statement to the Washington Times. "We have previously reminded this guest about our rules."

However, during an interview with the Washington Post Tuesday, Cini claimed he didn't break the rules.

"I was on a ride. I was not inciting a crowd. There was no crowd."

Cini also told the Washington Post that he knew that the photos of him carrying pro-Trump banners at Disney would go viral and that was his way of supporting the president, also adding that Trump is "doing a better job than any president I've ever seen."

"I do things differently," Cini told the Washington Post. "I do things that will go viral to support the president. I'm trying to let other Trump supporters know that you don't have to go to rallies. You can do this on your own."

"One person can have a bigger voice than a thousand people," he noted, also adding that he has received both death threats and praise from social media users who have seen his photos.

The New Yorker has also frequently drawn attention to himself by rowing up and down the Hudson River with a "Trump 2020" sign.

"I like to call it guerrilla marketing," he recently told the New York Post, also suggesting that he has other plans.

"I don't want to say, but I do have a new banner — and it's three times bigger than the [Main Street] one," he added.
Cini also said that he plans to fight his banishment from Disney in court.

Cini did not immediately provide a comment following a request from Sputnik News.