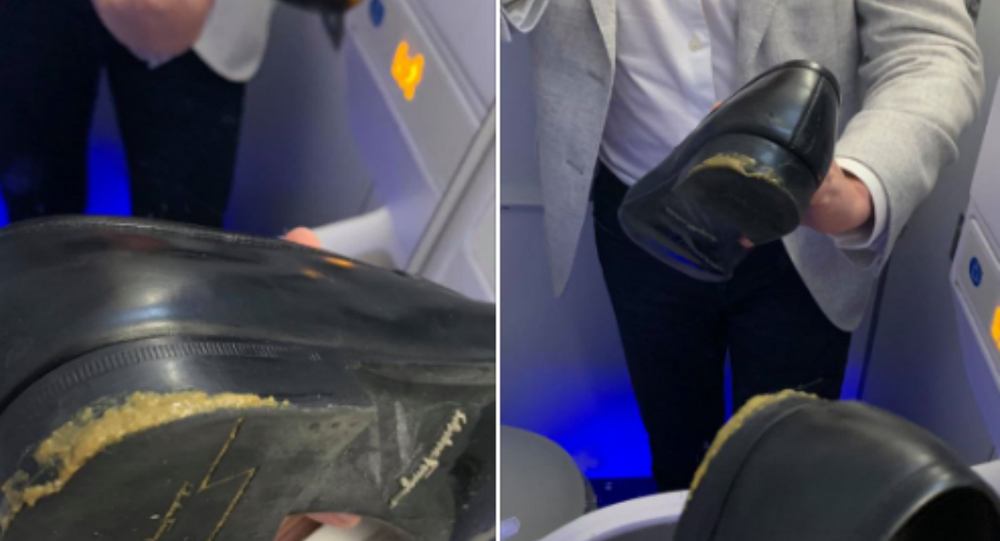 A Delta passenger was forced to sit in feces during his entire flight from Atlanta to Miami on November 1, and is upset at his crappy treatment by the airline during his ordeal.

Matthew Meehan was scheduled to take the last flight from Atlanta to Miami on Thursday when he realized the smell emanating from his seat was way worse than any hygiene issues he'd encountered on other flights.

"I sit in my seat, and I immediately smell something, and I thought, ‘Not another flight that smells bad,'" Meehan said in an interview with Yahoo Lifestyle Monday. "I realized the person next to me also had their nose covered. And then I went to take my charger out, bent down completely to charge my phone and realized it's not just a smell, it's actually feces and it's all over the back of my legs, it's all over the floor, all over the wall of the plane. And I sat in it," he told the outlet.

He and the other passenger both headed to the front of the plane to inform crew members about the excrement. However, the flight crew didn't seem all that surprised.

"The flight crew said, ‘Are you kidding me? We turned that in. I can't believe they didn't clean it.' They knew it was there," Meehan told Yahoo Lifestyle.

According to Meehan, he was later told by a Delta representative that Delta planes are required to have biohazard kits onboard flights.

"The fact that they either didn't take it down and offer me something from it to clean myself properly or it was absent completely from the plane broke protocol either way. They said they didn't have one," Meehan added.

Instead of figuring out a way to obtain sanitizing products, a flight attendant handed him two paper towels and a small bottle of gin to clean the excrement off himself.

"She wanted me to clean myself with regular alcohol, drinking alcohol," he said.

To make matters stinkier, Meehan didn't know if the diarrhea that had gotten all over his ankles belonged to an animal or a human.

"We didn't know if it was a person who'd gotten sick, an animal who'd gotten sick. Originally, the flight crew said that it was a German shepherd. And then the gate agent said in his paperwork that it was an older man who got sick upon landing. And now Delta Corporate is saying that it was a golden retriever puppy," he said. "But to me, it doesn't matter. It's feces; it carries disease any way you look at it."

"They [the flight attendants] didn't give me gloves. I had to take my pants off because it's on the back of my pants, so feces, at this point, is transferring to my hands, with no kind of sanitizing solution to be able to clean anything with, and only one tiny bottle of gin."

As Meehan tried to clean himself with gin in the bathroom, he expected that the crew members would be following the required protocol to clean the seat. Except, when he exited the bathroom, boarding was still taking place as usual.

The Delta representative who spoke to Meehan after the fact confirmed that Delta defied protocol by allowing the boarding process to continue even when they were well aware of the biohazard.

"Once a passenger brings a contagion or biohazard to staff's attention, you're supposed to stop boarding entirely," Meehan said the Delta representative told him, Yahoo Lifestyle reported. "And you're supposed to deboard if possible so that the contagion or biohazard can be properly cleaned without spreading or contaminating others. But they just kept boarding the plane."

When Meehan approached the flight crew once again regarding the feces, they responded, "If they [the cleaning crew] didn't clean, that's not our responsibility, someone from the gate needs to take care of that. We are in the middle of an active boarding. We're busy. If you want, you can get off the plane and talk to somebody." At this point, Meehan asked to speak to a manager and so the gate agent contacted one.

"I tell her what happened and she said, ‘If the cleaning crew didn't do their job, that's not my problem. What do you want me to do about it?'" Meehan said. "Very confrontational, like, so what? So I said, ‘Can we get that cleaned up so I can sit down?' So she says, ‘Sir, it's almost time for that plane to leave. You can sit in your seat or you can be left behind.' "

However, several passengers were also getting upset about the contaminated plane at this point.

"At that point, four or five other passengers had gotten up and out of their seats as well, standing at the flight attendant area in front in protest and wouldn't sit until it was cleaned," Meehan told Yahoo Lifestyle. The manager, wanting to avoid any more issues, asked someone to clean the seat with paper towels.

"To my knowledge, they did not use any kind of sanitizing solution, and I was supposed to be okay with that because she quote unquote, cleaned it," Meehan said. He asked for his seat to be sanitized one more time.

However, his requests were futile.

"She said, ‘We are pushing this plane back. You can either sit in your seat or you can stay behind.'" And so, Meehan had to "fester in feces for two hours" because he had to be in Miami the next morning, and that was the only flight that would get him there in time. With the flight being oversold, there were no other empty seats available.

In a Tuesday statement to Sputnik News, Meehan said, "You have a company, any company, treat its customers like this is not only unacceptable, it's abhorrent. Treated like an animal made to lay in feces is not only demoralizing, it's a major health risk. I've been potentially exposed to the likes of C. Diff, Hepatitis, Hookworm, Ringworm… a nasty plethora of things. And not just me — an entire plane full of passengers whose health and well-being matter less to Delta than pushing the plane away from the gate on time. We were no more than cattle in a cage to them, and that is repulsive on every level."

Delta Air Lines has not responded to Sputnik's requests for comment.

However, in a recent statement to Yahoo Lifestyle, Delta said, "On Nov. 1, an aircraft operating flight 1949 from Atlanta to Miami was boarded before cleaning was completed following an incident from a previous flight with an ill service animal. Delta apologizes to customers impacted by the incident and has reached out to make it right, offering a refund and additional compensation. The safety and health of our customers and employees is our top priority, and we are conducting a full investigation while following up with the right teams to prevent this from happening again." The company added that the plane was "deep cleaned and disinfected" once it landed in Miami.

Meehan told Sputnik News Tuesday that the airline offered him 50,000 miles in compensation following the incident.

"To be honest, the offer they made was insulting; 50,000 miles is what they give to someone in the airport terminals signing up for a credit card. It's nothing to them — and they thought 50,000 miles would ‘make it go away,'" he said.

"I could care less about miles. I want answers," he added.

"I don't know what diseases that animal or person was carrying to have caused such an excessive amount of diarrhea, and I want to know. What inoculations should I go receive? What antibiotics should I be taking? Without answers, I don't know what to take. And furthermore, no answers have been given to me as to why Delta staff did this to me, and how this will change protocol to make sure it never happens to someone else," he noted.