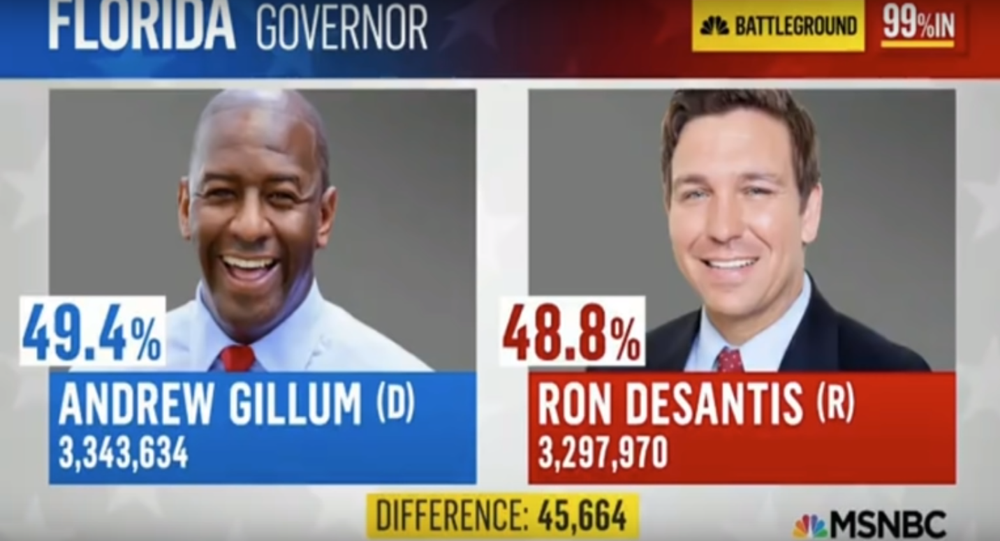 The fake vote tally, attributed to an accidental "misfire," appeared on Chris Hayes' program on Monday evening, prompting Republican-leaning social media users to claim that the network was engaging in fake news.

© REUTERS / Terray Sylvester
LIVE UPDATES: Democrats Projected to Control US House as GOP Retains Senate
Later into the program, Hayes clarified by saying the fake tally was a "misfire," adding that the very specific-looking numbers for each of the candidates were "test numbers."

"Just want to say, earlier this hour we showed a graphic of the Florida gubernatorial race. May have caught your eye because our system had inadvertently populated some test numbers," the All In host said. "Obviously, we do not yet have any vote totals here, the night before the election. That was a misfire. Don't worry. I was pretty confused when I saw it up there, to see it myself," Hayes added.

Not everyone bought the explanation, however, with social media users venting their rage about media bias or incompetence, MSNBC's pro-Democratic leanings, or even making claims that the whole thing was some sort of conspiracy.

MSNBC accidentally shows false results of Tomorrow’s election that has not happened in Florida showing socialist Gillum in slight lead against ⁦@RonDeSantisFL⁩. Wishful thinking? What do you think https://t.co/IHaTFIAYEq

If you don't believe in 'fake news'; think again! Last night, @MSNBC mistakingly placed this Florida Governor's race graphic on air, 24 hours PRIOR TO poll results, and with 99% of the polls reporting. How embarrassing for the fake news media! pic.twitter.com/uEIXiEi6Aj

Some users emphasized that the graphic was put up on purpose in a bid to demoralize would-be Republican voters. Others argued that it would only have the opposite effect.

This afternoon they will be tossing around exit polling results with democratic landslide results like they did in 2016. Don’t fall for this. Go vote!!!!

No Accident its physiological warfare they want the people to think its a wasted vote, so not to bother voting as already lost… No Accident #VoteRedToSaveAmerica

They making the same mistake they made in 2016 — suppressing their own turnout with fake polls.

Others recalled other Democratic-leaning media predictions from the 2016 election, implying that the same thing could happen again.

When did they mess up before? pic.twitter.com/hEw4v81Eax

A few questioned their fellow users' concerns, pointing out that Hayes explained the mistake and suggesting that netizens were just making a mountain out of a molehill.

Chris, you hit it right on target. We all have that family member that likes the drama. It's the new tactic stir the pot and advertise on social media. Reminds me of a bunch of teenagers passing notes around in school. Get out and vote!

Republicans don’t watch MSNBC anyway, what difference will it make? But for Republican pundits crying about it, surely no more than a few hundred Republicans in the entire state of Florida probably saw it.

Be prepped for conspiracy theories in Florida. @msnbc just flashed a graphic showing @AndrewGillum winning with 99% of the vote in. Assume they are practicing for tomorrow. @chrislhayes…oops. pic.twitter.com/6Owf9XNaXU

Finally, a few jokers took things in a more absurd direction, embracing the conspiracy theory tone and suggesting this was all the work of the illuminati.

Wait, how does @MSNBC and @chrislhayes already have Florida results? #TheIlluminatiIsReal pic.twitter.com/taomeTVvzN

Americans are going to the polls on Tuesday to cast their ballots for a series of federal, state and local officials. All 435 seats of the US House of Representatives, 35 of 100 seats in the US Senate, and 39 state and territorial governorships are up for grabs. In Florida, Republican Ron DeSantis and Democrat Andrew Gillum have been running a close race, with the two candidates polling within less than five percentage points of one another for months ahead of the November 6 vote.

Midterm Elections 101: What's at Stake, Will the Blue Wave or Red Surge Win Out?