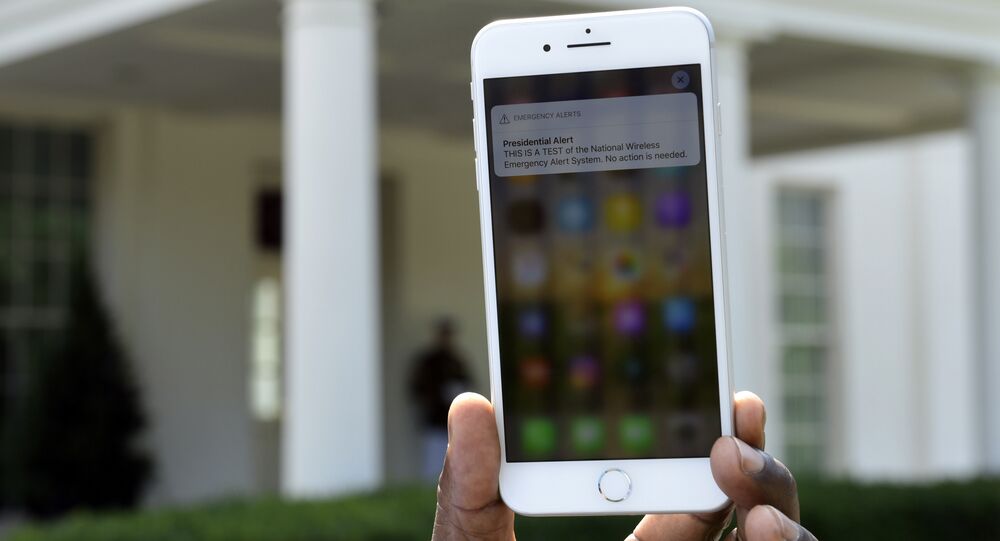 On Wednesday cellphone users across the US got an emergency presidential alert ‒ a “TEST” to make sure that the communication system was working properly, as it had never been used before. Twitter users, as expected, had mixed feelings about further intrusions by the Trump administration.

The system is meant to warn Americans of threats like missile attacks, terrorism or natural disasters, but if you ask Twitter, US President Donald Trump himself is, in fact, the disaster.

Alarm sounds blasted through the Sputnik News office in downtown Washington, DC, at approximately 2:18 p.m. Immediately afterwards, Twitter was flooded with tweets about the alert. Many of them are too vulgar for us to share, however, and most were unhappy they received the message.

"THIS IS A TEST of the National Wireless Emergency Alert System. No action is needed," the alert said.

Unlike other emergency alerts, Americans were unable to opt out of this one. The only way to avoid it was to turn your phone off or activate airplane mode. Some televisions were also apparently affected by the Trump test.

Many Twitter users used the opportunity (not that there is a lack of them) to mock the president.

​Others took issue with the line that "no action is needed."

Reporter Ken Klippenstein appears to have predicted the response from a certain segment of Trump's base, tweeting, "How many bewildered retirees got the presidential alert and thought the deep state coup was finally happening?" Within an hour, Will Sommer, who frequently covers the far-right, boomer-inclusive QAnon conspiracy movement, reported that "Qanon believers are rejoicing over today's presidential text, which they see as a step towards Trump imposing martial law."

Some critics suggested that the test alert could be a propaganda tool as the midterm elections approach.

Many, however, just enjoyed — for a brief moment — the opportunity to revel in the sheer absurdity of the situation.