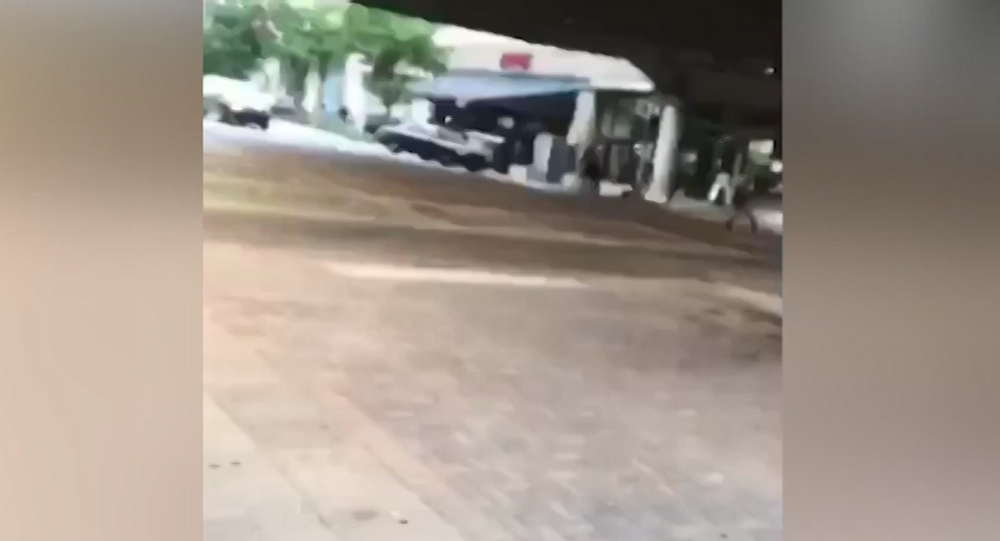 Bystander cell phone footage captured police in Indiana’s Marion County stopping a suspect fleeing on a bicycle Tuesday night by ramming his bike head-on with their squad car, sending the suspect flying over the hood as witnesses screamed in shock.

The incident occurred at the corner of North Illinois and West Washington streets, underneath the glass-domed Indianapolis Artsgarden, an elevated pedestrian connector spanning the intersection in the state's capital city.

According to the Indianapolis Star, the suspect, 35-year-old Devan White, was wanted on an outstanding warrant for failing to register as a sex offender. The video, provided to the Star by Drake Strange, only includes a few seconds of the pursuit, in which White was fleeing from several cops on a bicycle. The distance and the low quality of the video make it hard to tell exactly how it happens, but a Marion County Sheriff's Department police cruiser, a Ford Crown Victoria driven by Cpl. Chad Meeks, suddenly comes from the opposite direction and hits White's bike head-on.

​Bystanders who turned to see the collision can be heard screaming in horror as they slowly process what they've just witnessed.

Screenshot/Athens-Clarke County Police Department
‘I Got Him With My Car’: Georgia Cop Fired After Ramming Suspect with Vehicle (VIDEO)

As first responders tend to White, who lies motionless on the ground by the squad car, bystanders begin to shout at the police.

A woman shouts at the deputies, accusing them of being racist and murderers.

"That's how you arrest people? You hit people to arrest people?" a man off-camera yells. "This [man] was running and they hit him. They didn't have to hit him; he was on a [expletive] bike!"

According to the sheriff's office, White was taken to a hospital in stable condition, the Star reported. Meeks also sustained a minor eye injury that did not remove him from duty.

The publication reported that the Indianapolis Metropolitan Police Department is investigating the incident. However, the Marion County Sheriff's Office is not.