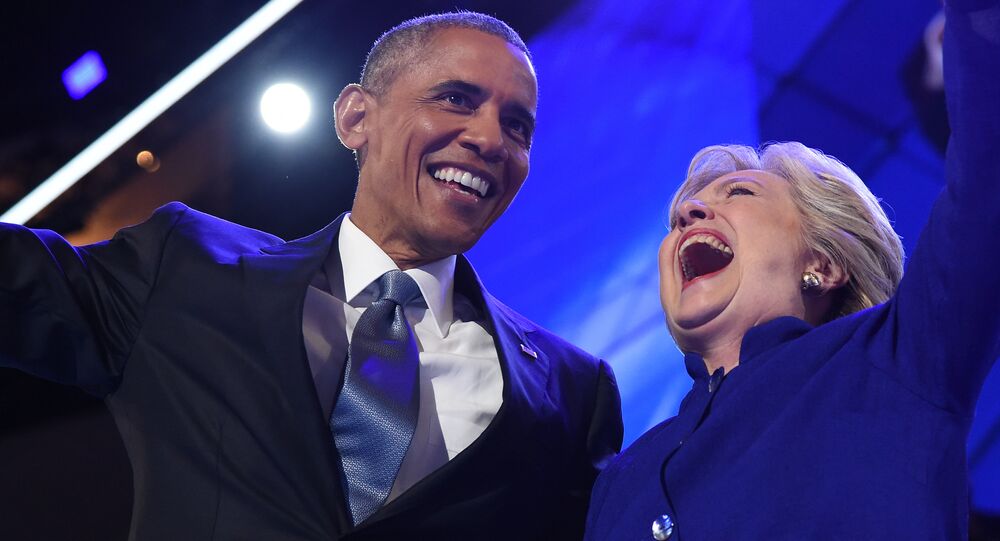 Buoyant US GDP growth and jobs numbers have pitted President Donald Trump and former President Barack Obama against one another in a battle to claim credit.

"The basic point is that America's businesses … their activity is forward looking. And so if you want to model their investment today, then you have to understand the fact that they're forming expectations not just about this month, but about the next 5, 6, 7, 8, 9, 10 years," Hassett said, speaking at a White House press briefing on Monday.

"Perhaps, you know, everybody, except for Mrs. Clinton's supporters, was starting to do that right after the election. And the fact is that those expectations turned out to be rational because the turnaround that they expected is something that we see, as you just saw in the data," Hassett noted, following a chart and graph-heavy presentation aimed at dispelling former President Barack Obama's claim that his administration was responsible for today's growth and jobs trends.

Screenshot/ ·微视界
Chinese Economic Growth Slows, Exports Strengthen Amid Trade Tensions With US
Hassett's presentation included polling on small business optimism and figures on capital spending and new startups, among other data, aimed at showing how trends changed after the 2016 election.

Speaking at a campaign event in Illinois on Friday, Barack Obama said that his presidency laid the groundwork for today's trends. "When you hear how great the economy's doing right now, let's just remember when this recovery started," he boasted.

"I mean, I'm glad it's continued, but when you hear about this economic miracle that's been going on, when the job numbers come out … suddenly Republicans are saying it's a miracle. I have to kind of remind them, actually, those job numbers are the same as they were in 2015 and 2016," Obama added.

Obama's comments prompted Trump to hit back in a tweet quoting the former president's 2016 remarks about Trump needing a "magic wand" to deliver on his promises to boosting GDP growth to 4 percent.

“President Trump would need a magic wand to get to 4% GDP,” stated President Obama. I guess I have a magic wand, 4.2%, and we will do MUCH better than this! We have just begun.

In another tweet, Trump accused Democrats of "flailing & lying like CRAZY" amid "perhaps the best [economy] in our country's history."

The Economy is soooo good, perhaps the best in our country’s history (remember, it’s the economy stupid!), that the Democrats are flailing & lying like CRAZY! Phony books, articles and T.V. “hits” like no other pol has had to endure-and they are losing big. Very dishonest people!

The back-and-forth economic debate has been active on social media, with users throwing stats back and forth at one another in an attempt to back either Trump or Obama's arguments.

How long has Trump been in office. Give him 8 years like Obama and you would be amazed and vote him in fir a 3rd term. Trump is doing magic.#GoTrump

A record number of seniors are filing for bankruptcy. Consumer debt is at record highs. Wages remain stagnant. Share prices are artificially inflated due to corporate stock buybacks. The economy continues to be fantastic for the top 1%, but certainly not for average Americans.

It's a FACT that President Trump is a savvy and insightful business man! He's leading our country for the good of the American citizens and their future generations❤️🙏❤️🇺🇸🙏❤️

Real State of US Economy