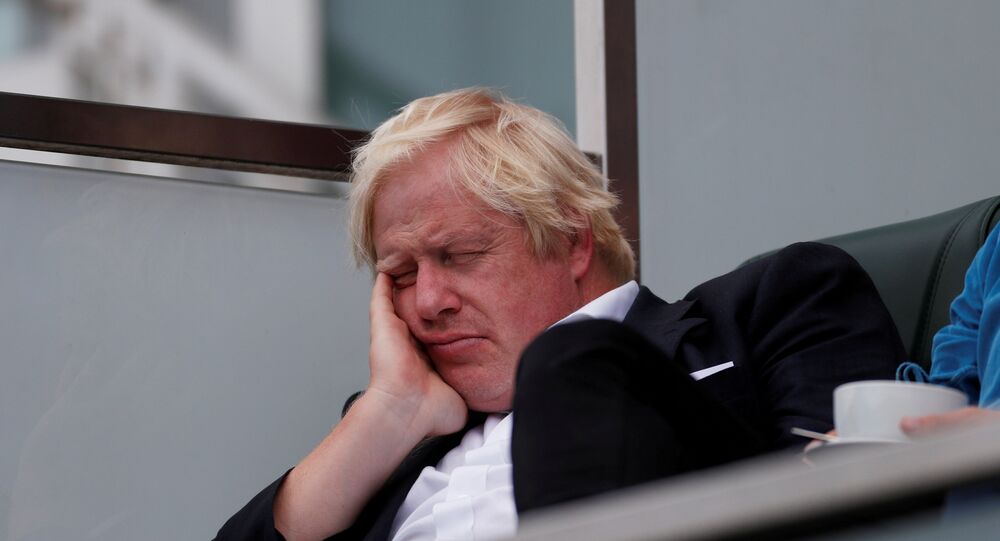 After being tossed out of his own house amid a divorce announcement, the former UK foreign secretary nodded off in front of a 25,000-seat stadium.

It’s been a long and tough week for the former foreign secretary, which is apparently what led Johnson to fall asleep during an England-India cricket match, The Sun reported. Johnson was shown twice on the big screen during the England test match at the Oval cricket ground; the first time sitting with his phone and the second time dozing in his chair at around 3 p.m.

Both times the crowd booed and jeered, waking him up in the process and making it the most memorable part of the match, according to fans’ tweets.

Boris Johnson just appeared on big screen at The Oval and got roundly booed by the crowd. Spirit of the game… #ENGvsIND pic.twitter.com/SlW70pxJ1z

Boris Johnson came on the big screen at the cricket and the whole crowd started booing. Best thing was, he was asleep 😂😂 #ENGvsIND

Haven't heard such loud boos from both sets of fans at the cricket for a very long time. Who knew Boris Johnson could bring people together like that? #ENGvIND

Johnson indeed has been through a stressful week. In a short statement released on Friday Johnson and his wife, Marina Wheeler, 54 announced that they are starting divorce proceedings after 25 years of marriage, admitting that they had split up “several months ago.” Media speculations swirling around a possible reason for the divorce is an extramarital affair by Johnson while he was still foreign secretary. BoJo later resigned his Cabinet position in protest against Theresa May’s stance on Brexit.

Even before the official statement by the couple, different media outlets were posting information that Boris had been chucked out his own house over the “fling”, affecting his image on social media. The jokes varied from seeing BoJo as a homeless man sleeping in a stadium to suggestions about what exactly Johnson was looking for on his phone.

However, not all Twitter users believed the reasons for Johnson's nap was due to his hellish week. Cricket matches are well-known for their length and slow pace, so some users, clearly not fans of the sport, blamed it for boring the ex-Mayor of London to sleep.

Boris Johnson acting out the perfect divorced man lifestyle, sat alone and asleep at the cricket.

Bozza falling asleep at the cricket is probably the only thing anyone could ever relate to him on. 🙈 #snoozefest #boris pic.twitter.com/t63CiWdYOT