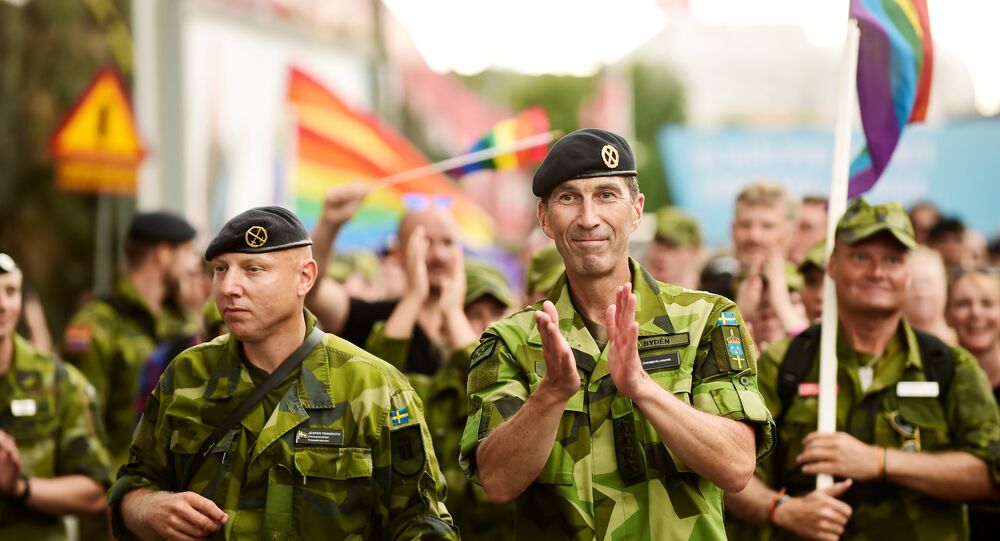 While the Swedish Armed Forces' support for the LGBT cause is not a secret, Supreme Commander Micael Bydén has divided the Swedish public by performing Elvis Presley's "Suspicious Minds" during this year's Pride Parade.

The Swedish Armed Forces have invested heavily in this year's Pride and officially announced participation in eight different events in Stockholm and Gothenburg.

Ahead of the festival, the Swedish Armed Forces also launched a campaign of their own called "We Do Not Always March Straight" in support of sexual minorities. "But regardless of when or where we march, we are always up for your right to live how you want with who you want," the Swedish Defense Ministry pointed out.

The campaign, the soldiers' appearance with rainbow-painted faces and Supreme Commander Micael Bydén's Elvis performance has sparked a debate on Swedish social media over the appropriateness on the military's emphasis on issues pertaining to sexuality.

​Many Swedes argued that the state should refrain from partaking in such events for the sake of neutrality, venturing that taking part in Pride was tantamount to political activism.

"In this scenario, they should take a stand for everyone. And I mean everyone. The short, the thick, the schizophrenic, environmentalists and people who smell bad and therefore are discriminated against. Too much? Good, then shut up and do your job!" a user wrote.

​​"I myself do support Pride. But should the state take part in parades? What else should it take part in? And if not, why? The state should protect, but remain neutral," Jonas Lundén tweeted.

"Poor confused people! How important is one's sexual orientation? Focus on combat and defense instead of LGBT and gender!" user Mesalina wrote, suggesting that the time and effort could be spent in a better cause.

​"Yes, please defend us against the Russians with some rainbows," another user wrote wryly, referring to the "Russian threat" that perennially surfaces in Swedish defense reports.

Fittingly, many Swedes focused on the idea, as Russia is often portrayed as an enemy in the Swedish press.

"Imagine how Putin is guffawing now, at the 'Swedish Defense'. Which in itself has been a joke for decades now," another user chipped in.

"The whole world is roaring with laughter. Lunatics," yet another user reacted.

One user even suggested that Bydén had forgotten to change, tweeting that tanga briefs and a pussy hat would constitute more appropriate clothing.

​At the same time, the Swedish Defense and Micael Bydén received a lot of praise for their commitment.

"Still it's nice to live in a country whose Supreme Commander openly supports the rights of the LGBT community. There are not so many countries like this in the world. Now this is something worth defending," a user wrote.

This year marked the thirteenth time the Swedish Armed Forces have participated in Pride events.