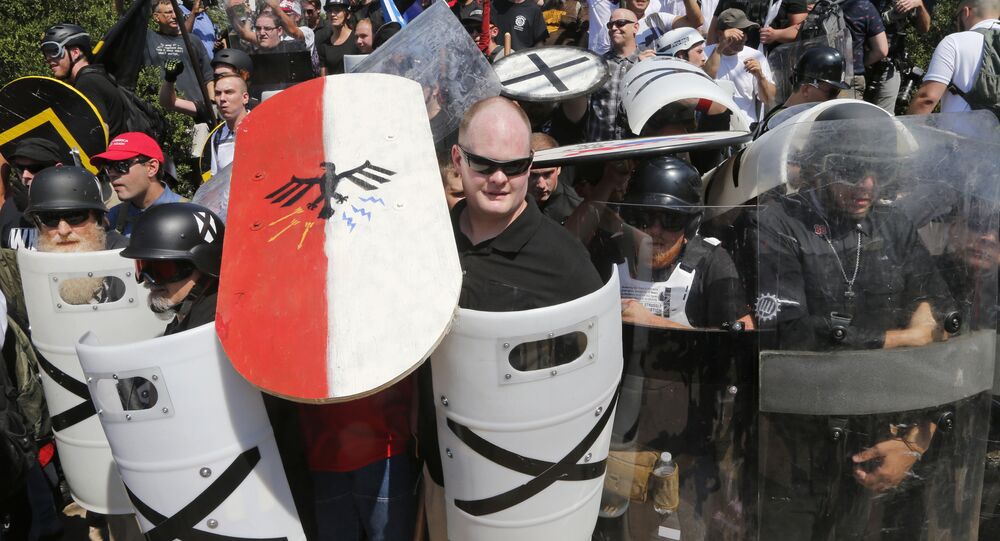 As the city of Portland, Oregon, prepares for what many officials consider to be potential violence during a far-right march on Saturday, armed Trump supporters from several US right-wing groups are claiming to assert their right to free speech as counter demonstrators gather nearby.

Only one month after city police shut down a similar march by the neo-fascists — describing the scene as a "riot" — American white nationalist groups are at it again in America's northwest.

Created by Republican right-wing ‘Patriot Prayer' (PP) group leader Joseph Gibson — who is running for a state senate seat in neighboring Washington — the so-called ‘Freedom March' claims to support free speech as well as the policies and actions of US President Donald Trump's anti-immigration programs.

Alabama-based Southern Poverty Law Center (SPLC), an organization that keeps tabs on hate groups like PP, noted that the "potential for violence may be greater" than that of the June 30 Portland riots, adding that the Saturday march has the potential to become "another Charlottesville," in reference to the violence used at an August 2017 march in which a white nationalist member of the right-wing PP group killed a counterprotester by speeding his grey 2010 Dodge Challenger into a crowd.

Portland police have set up weapon screening locations while sniffer dogs will sweep the area for explosives, according to the Portland Mercury.

"We've always had guns at the rally,' a PP spokesperson asserted in a June 30 Facebook post prior to the earlier Portland riots.

"Everyone should be carrying around guns at all times," added the right-wing PP group's statement.

Portland-based anti-fascist author Alexander Reid Ross told Al-Jazeera that PP members and an allied white-racist skinhead cabal calling itself the Proud Boys make "no effort to make things appear even mildly peaceful," adding that they appear "like they were there just to fight."

Portland riot police are on standby, according to local sources.

Local Portland weather is currently partly cloudy and dry, with temperatures in the low 80s Fahrenheit.