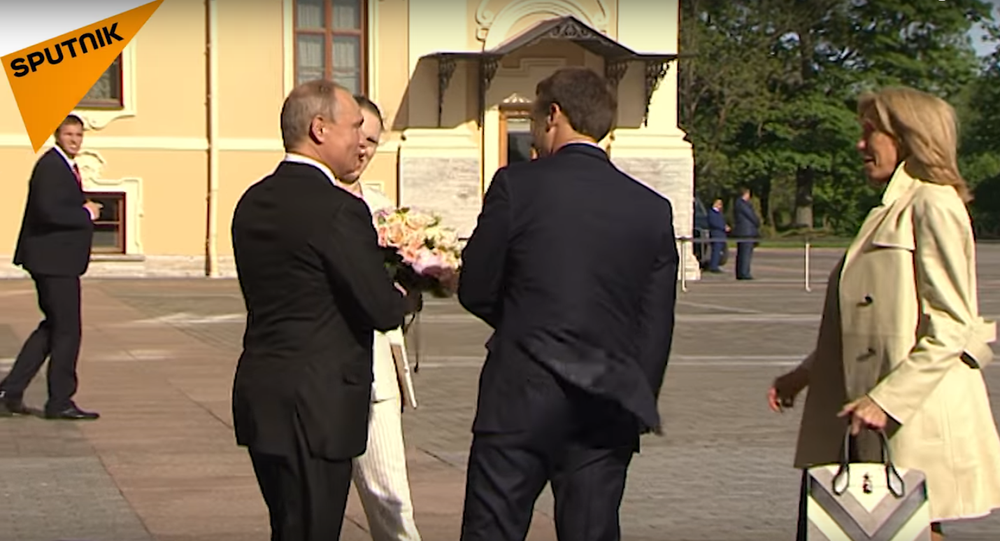 Seemingly ignoring recent German media criticism that his bouquet for German Chancellor Angela Merkel was an "insulting" act of "macho dominance," Russian President Vladimir Putin did it again, this time giving Emmanuel Macron's better half an arrangement of pink and yellow flowers.

The Russian president's diplomatic gesture, made ahead of talks with his French counterpart in St. Petersburg on Thursday, prompted Twitter users still recovering from Bild's claim that Putin's flowers have a "hidden meaning" to swoon anew.

Putin shakes Macron's hand and gives a bouquet to his wife, then starts showing them around the Constantine palace in Petersburg. Big image boost for Putin on the day of the economic forum pic.twitter.com/pR0PQcUa53

Last week, Bild wrote a piece suggesting that while Putin's flowers for Chancellor Merkel may have looked "like a courtesy…in fact [they were] an affront."

© Sputnik / Sergey Guneev
German Tabloid Sees 'Hidden Meaning' in Putin's Bouquet for Merkel, Prompts Twitter Debate
If that's the case, the Russian president can be said to have a history of "dissing" his guests with bouquets going back nearly two decades. Since he became Russia's president in 2000 and again in 2012, Putin has showered numerous women, as well as a few men, with flowers as a sign of his respect.

In addition to numerous bouquets for Chancellor Merkel, Putin has also given flowers to Croatian President Kolinda Grabar-Kitarovic, Queen Beatrix of the Netherlands, Austrian diplomat Ursula Plassnik, and the wives of numerous statesmen, from Cherie Blair to Laura Bush to Xi Jinping's wife Peng Liyuan. In 2007, he even gave a boquet to Patriarch Alexy II on the occasion of his 78th birthday.