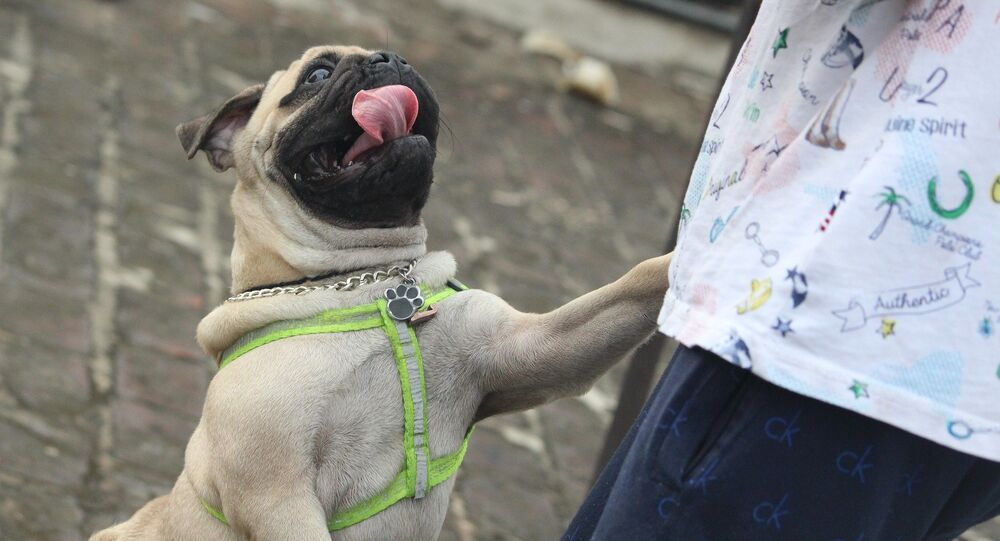 The video clip of a dogowner in the UK teaching his pet to perform a Nazi salute in response to statements such as 'gas the Jews' and 'Sieg Heil' has landed the 30-year old Mark Meechan with a hate crime conviction, something that set off various commentary online.

Mr. Meechan of Coatbridge, Lanarkshire was convicted on March 20 at Airdrie Sheriff's Court in Scotland.

In his Twitter bio he describes himself as a "professional sh*tposter" who is "going to jail for a joke" and according to one of his latest posts, he might be placed under house arrest, while awaiting sentencing, which will take place on April 23.

While awaiting sentencing, Court has ordered that I meet with a court social worker for an assessment as to whether or not a Restriction Of Liberty Order will be placed on me. This would involve a GPS tracking device being attached to me and me being placed under house arrest.

Meechan is the author of a clip, viewed more than a million times on YouTube, in which he is seen training his girlfriend's dog to lift its paw in resemblance to the Nazi salute.

"My girlfriend is always ranting and raving about how cute and adorable her wee dog is so I thought I would turn him into the least cute thing I could think of, which is a Nazi," Meechan says in the video.

The video has triggered countless complaints, which led to Meechan's arrest for allegedly committing a hate crime.

During the court recess, Meechan posted a video address on his Twitter account, calling on viewers to "keep fighting for free speech and keep fighting the good fight."

Social media users have reacted to the case, commenting on Meechan's conviction, including famous British comedian and actor Ricky Gervais.

believe it or not, he arrested me with gusto and said I was an actual Nazi trying to inspire people to become Nazis. I'm not joking.

I didnt think of the handcuffs until I read your comment. Youre right, they're completely unnecessary

My ancestor's didn't survive the Holocaust just to have you use your dog to spread your Nazi ideology and the hate that follows.

“If liberty means anything at all, it means the right to tell people what they do not want to hear.”
― George Orwell

Wow, the UK has really lost its ways. I guess the entire cast of Monty Python would be in prison if their show was made today.

During the trial Meechan denied any wrong doing and insisted he made the video called "M8 Yer Dugs A Nazi" to annoy his girlfriend Suzanne Kelly, 29.

However, Sheriff Derek O'Carroll found him guilty of a charge under the Communications Act that his video was grossly offensive due to its 'anti-Semitic and racist in nature,' aggravated by religious prejudice.

"In my view it is a reasonable conclusion that the video is grossly offensive. The description of the video as humorous is no magic wand," Sheriff Derek O'Carroll said.