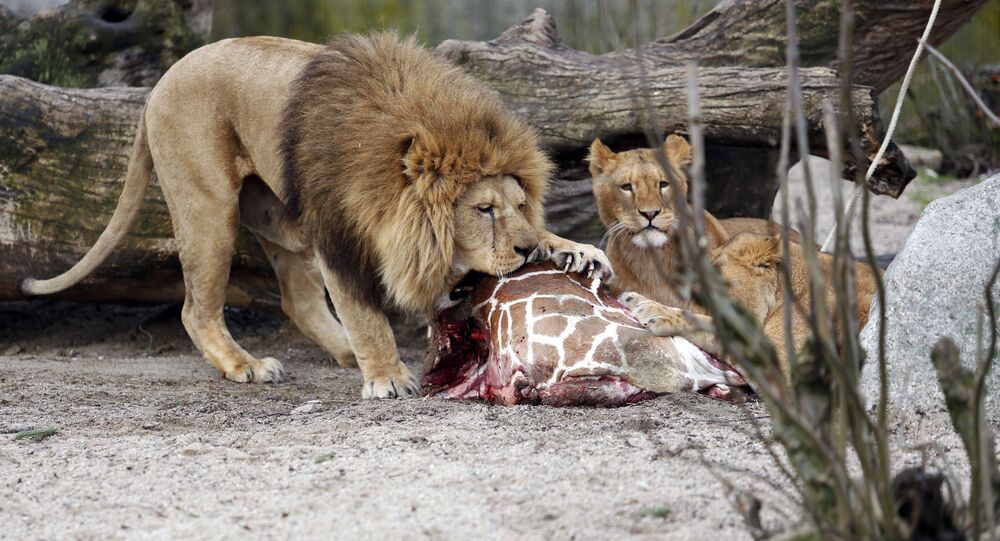 Denmark, which has previously sparked controversy with its unorthodox ways of slaughtering animals deemed unfit for breeding and dissecting them in front of the public, has taken things to a whole new level by collecting people's unwanted house pets as feed for carnivores.

For those willing to do away with their pet, hungry predators at the Copenhagen Zoo and Givskud Zoo are more than ready to take over. Both zoos are eagerly accepting pet animals as feed for carnivores like lions, tigers, wolves and Tasmanian devils.

Those willing to donate a horse, however, will be facing a three-month waiting period due to limited freezing space, whereas smaller animals are taken in at short notice. At present, the Copenhagen Zoo gets five-six rodents — typically rabbits — handed in per month, but are always open for mode live donations.

"It's good for the animals to have a varied diet, so it's not always a horse or a cow. Plus there is fur that is fun to chew on, and their intestines are super-healthy for them," animal keeper Ann-Sofie Eller told the Danish TV channel TV2.

© CC0
Headless Cocks: Chickens Executed for Kids' Education Arouse Debate in Denmark
The zoos don't only welcome the free food, but also the debates that the donations give rise to. Parents who accompany kids donating their pets are advised to refrain from offering uplifting back-up stories about "rabbit heaven." It is in the spirit of the Danish zoos to show nature as natural as possible, without trying to "Disney-fy" the animal kingdom. Therefore, former owners have the opportunity to witness the demise of their pets firsthand.

"People are moved, so we spend a lot of time telling them what is about to happen. I think people would prefer something meaningful, rather than just having them put down and incinerated," Ann-Sofie Eller explained.

One might think that the bigger the animals, the happier the predators. However, the zoo only accepts smaller pets, mostly on the rodent level.

"These are natural prey for predators. Feeding them dogs or cats is unethical because it's not natural for them," Ann-Sofie Eller explained.

© Photo : zoo.dk
Culled in Copenhagen: Infamous Zoo Euthanizes Third Baby Giraffe
At Givskud Zoo, this practice is relatively new and was introduced due to popular demand after several inquiries were made by owners seeking to dispose of their pets.

"We do not do it to offer people a way to kill their pets. We do so because we need the animals," zoo director Richard Østerballe explained. "When people come here with their rabbits, it is to have them put down. We don't want to hide it from children," he concluded.

The Danish zoos previously sparked international controversy with their practice of culling animals deemed "superfluous" and "genetically inferior" and dismembering them in public. While numerous leopards, tigers, lions and bears have been put down in recent years, Marius the giraffe remains perhaps the most iconic figure of Denmark's back-to-nature animal cruelty.

Yes, it's me, or more precisely part of me… #Victims #Cruelty #ThisCruelWorld pic.twitter.com/HS630S1qxH