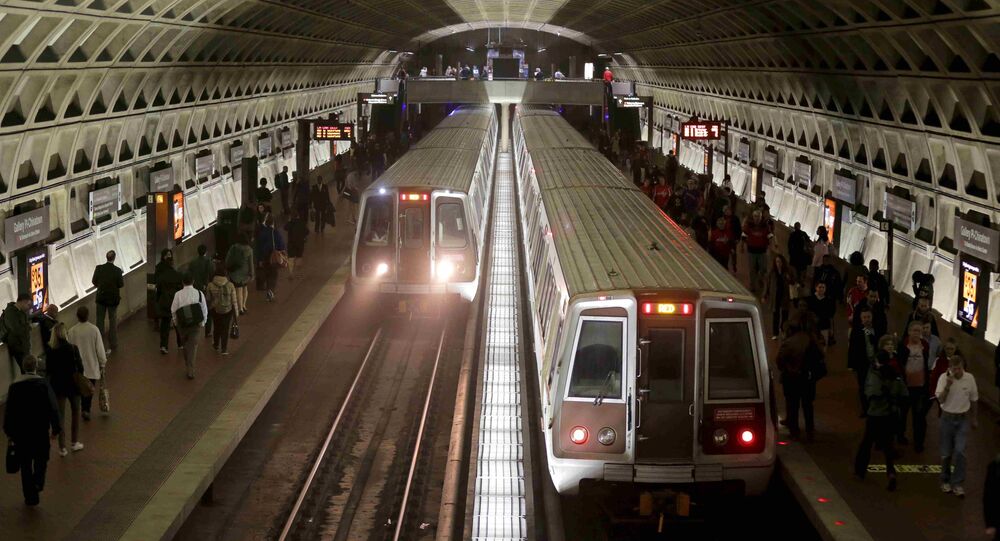 The Catholic Church is suing the Washington Metropolitan Area Transit Authority (WMATA), which regulates the advertisement on DC's transportation network, for banning one of its Christmas season ads in the US capital, where less than 50 percent of the population expressly identifies as Christian.

The Archdiocese of Washington, the Catholic Church's branch in Washington DC, has filed a lawsuit against the regulatory authority, alleging that the ban violated its right to free speech.

WMATA rejected the Catholic request to display one of its ads that was supposed to invite people to participate in the Christmas season and encourage spirituality due to the fact that it supposedly promoted religion, breaching the authority's guidelines.

© AP Photo / John Locher
Dressed for the War on Christmas: Trump MAGA Hats Get Holiday Makeover (PHOTO)
The Church, however, contests this finding, pointing to the absence of any religious wording in the ad, which merely included the silhouettes of shepherds placed against the background of a starry night, in homage to Jesus's birth.

According to official State data, only 13% of the DC's population is Catholic, though the Church's data pins the number of worshipers closer to 22%.

The words on the advertisement invited readers to "Find the Perfect Gift" and providing a link to their website for those who are interested in Catholic traditions.

"Jesus is the perfect gift," the information on the website says.

"Find the perfect gift of God's love this Christmas."

Speaking to Newsweek, WMATA spokeswoman Sherri Ly said that the ad might have been accepted before 2015, when the transport authority chose to prohibit all "issue-orientated advertising, including political, religious and advocacy advertising."

In its public statement, however, the Catholic Church argued that the ad did not breach the WMATA rules, as it simply "conveys a simple message of hope, and an invitation to participate in the Christmas season."

The Archdiocese's Director of Media Relations Chieko Noguchi also told Newsweek that after carefully studying the Metro's guidelines and specifically, the Church opted to use the ad in question to fit the specific rules.

"Our other ads have a very similar image but contain a quotation from the Book of Luke. This is the simple one, just for Metro," the spokesperson said.

However, the ad might have been caught by another WMATA rule that broadly proscribes "advertisements intended to influence members of the public regarding an issue on which there are varying opinions."

Several other supposedly controversial ads were previously banned by the transport system for violating the rule.

FACEBOOK/AFDI
Judge Rules Philadelphia Buses Must Run Anti-Islam Ads Featuring Hitler
It is also not the first time the has found itself in a legal debacle.

Earlier this year, the American Civil Liberties Union (ACLU) sued the Metro, seeking to abolish the existing guidelines for being "misguided and impossible to administer fairly."

The ACLU filed the lawsuit against the transport system for forbidding ads, while promoting Yinnopolous's book Dangerous due to the writer's controversial image, sparking an outcry from many of its followers.

Glad they’re suing. The ad doesn’t mention religion or the reason for Christmas, but now even if Christians want to buy ad space, they’re denied! What does @wmata have against Christianity?

I agree. But to deny a benign Christmas ad, but allow another that might cause psychological harm (holocaust survivors, WWII vets) is rediculous.

@wmata seriously? blocking the @WashArchdiocese from advertising at Christmas is anti-Catholic and a violation of the First Amendment. It's also super scroogey. https://t.co/kJcRZNauys #bahhumbug

Coldest in Over 100 Years: Moscow Celebrates Christmas With a Shiver