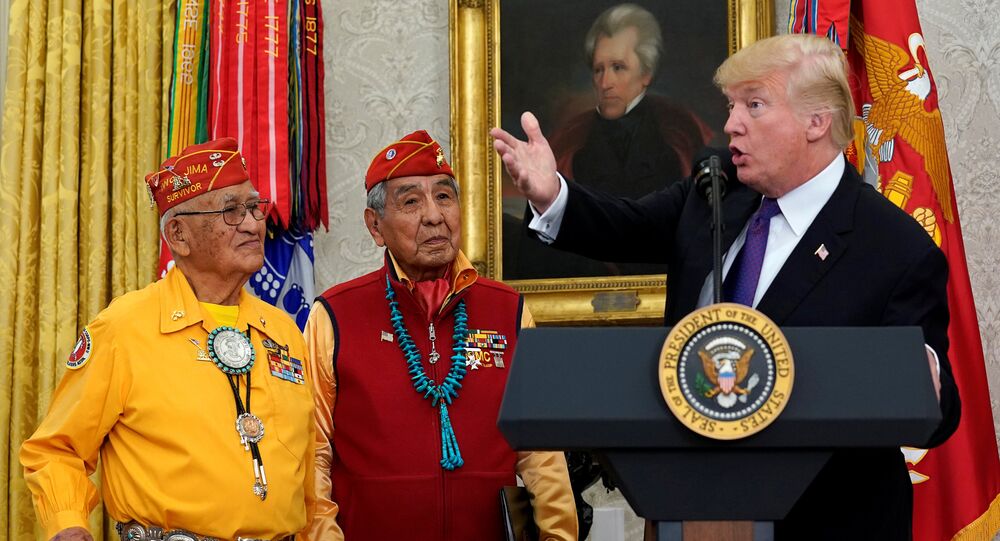 On Monday, US President Donald Trump referred to Senator Elizabeth Warren (D-MA) as “Pocahontas” during an event honoring Native American veterans at the White House.

During the event, Trump recognized the last surviving Native American Code Talkers, who used codes based on their native languages to enhance the speed of encryption of communication during World War II.

"You were here long before any of us were here. Although we have a representative in Congress who they say was here a long time ago. They call her Pocahontas," the president said, alluding to Warren's claimed Native American heritage. "But you know what, I like you because you are special."

Trump made his comment while standing in front of Andrew Jackson's portrait, the US president who signed the Indian Removal Act in 1830, which allowed presidents to grant unsettled lands west of the Mississippi in exchange for Indian lands within state borders. His anti-indigenous policies led to the deportation of five of the largest Native American nations in the US at the time — Cherokees, Choctaws, Chickasaws, Seminoles, and Creeks — on the "Trail of Tears" to Oklahoma, during which tens of thousands of Native Americans died.

In response to Trump's comment, Senator Warren said, "It is deeply unfortunate that the president of the US cannot even make it through a ceremony honoring these heroes without having to throw out a racial slur."