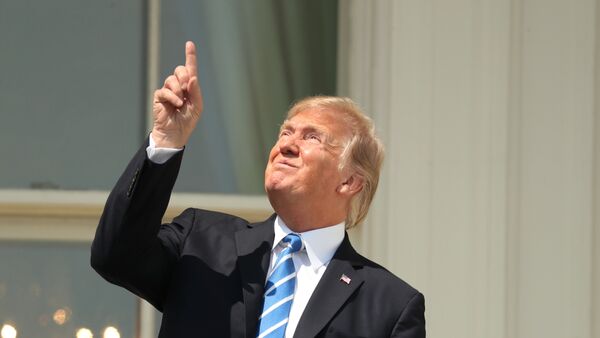 © AP Photo / Andrew Harnik
Subscribe
US President Donald Trump’s claims that Time magazine called him to say that he was "probably" going to be named their "person of the year," but he "took a pass" have caused an avalanche of reactions on social media, from ironic comments to calls to give the award to the POTUS.

"Time Magazine called to say that I was PROBABLY going to be named 'Man (Person) of the Year,' like last year, but I would have to agree to an interview and a major photo shoot. I said probably is no good and took a pass. Thanks anyway!" Donald Trump wrote on Twitter.

His statement, however, was soon disputed by Time. The magazine said that the president was "incorrect" about how it chooses "Person of the Year." This year’s winner is set to be announced on December 6.

The situation was commented on by journalist Richard Stengel, former managing editor at Time magazine, who trolled Trump on Twitter.

Hate to tell you but that PROBABLY means you’re NOT Person of the Year. They just wanted a photo shoot. But I’m sure you still have that fake TIME cover somewhere in storage. https://t.co/HkW1XkKxXK

Amazing. Not a speck of truth here—Trump tweets he 'took a pass' at being named TIME's person of the year https://t.co/D6SJgyTpcY

​Some on Twitter suggested that Trump’s claims were just false.

Sounds like President Trump found out he wasn't Time's Person of the Year so he created a false narrative that he was offered & declined the honor.

Is anyone surprised that Time Magazine completely busted you on your false claim that you were going to be named “Person of the Year.”? Poor man has to make up stories to make himself feel important.

What a time to be alive. Is POTUS Trump a lost teenager seeking attention in attempt to find love and validation, or is he a mere histrionic man baby? Will we ever know? Perhaps @TIME will tell pic.twitter.com/PVvdf1Yl54

​Others joked that Time should give the award to Hillary Clinton, who Trump defeated in the 2016 presidential election, and to many others.

I gotta say I think @HillaryClinton being @Time’s Person of the Year may drive Trump’s insanity to a level no one could ever even fathom. They should do it.

TIME should name Hillary Clinton person of the year for putting up with Trump's BS Attacks for so long. pic.twitter.com/vg42AaFbuB

Time should give her Person of the Year. The hero who suspended Trump's Twitter account is a close second. pic.twitter.com/YYfjAKLHnm

​​There also were other suggestions about who deserves "Person of the Year" more than Trump.

Any charity or relief worker who went to Puerto Rico for longer than a day or so is more qualified to be TIME’s Person of the Year than Trump.

​Many others, however, have argued that Trump really deserves the award.

I love you Mr. President! You are my hero. #MAGA #Trump2020 #TrumpTrain

If Time Magazine can find another man that's created 1 million+ jobs, $2 Trillion in stock market value and defeated ISIS in just 9 months, they should name him Man of the Year

We don’t need Time magazine to tell me that Trump is “possibly” the Person of the Year.

Trump had ZERO experience, beat 16 polished candidates, then beat a billion dollar democrat, with the GOP establishment, media, & Democrats against him.

He’s easily Person of the Year.

​The "RussiaGate" farce also did not go unmentioned.

SERIOUSLY?!?!?!?! How much are the Russians going to pay for that crap???? We all know you've added a new definition to the word Dotard.

TIME should make General Flynn Man Of the Year

It's simple: if Time magazine wants to mess with Trump, it should name Robert Mueller the "Person of the Year"

​In June 2017, The Washington Post reported that "fake" Time covers featuring Trump in his days as host of "The Apprentice" were hanging in several of Trump’s golf clubs. According to the report, the magazine asked the Trump organization to remove them. This story was not forgotten by twitterians.

Don't worry though, you can always have some more fake covers doctored up and posted around your resorts.

​In 2016, Trump was named Time’s "Person of the Year" after his sensational victory over Hillary Clinton in the presidential election.