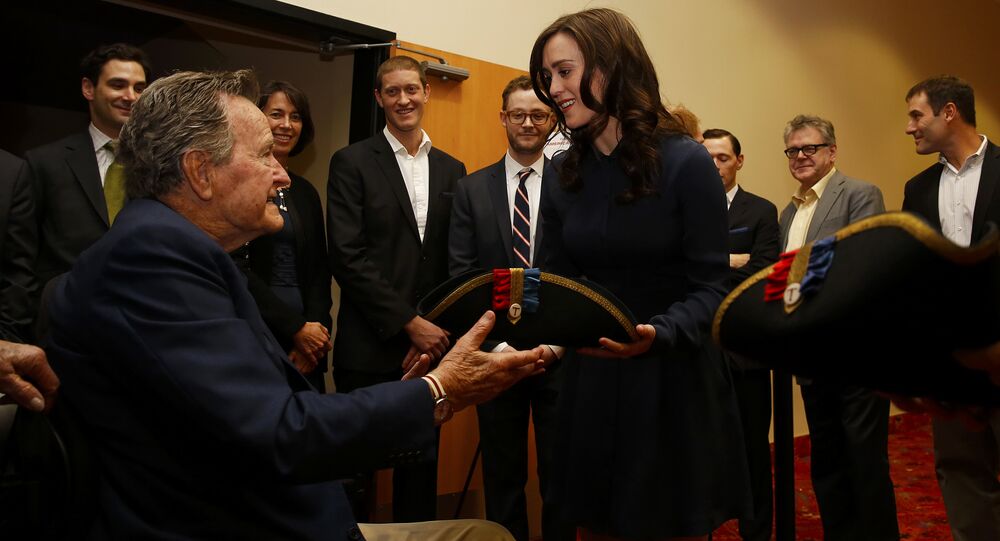 Social media is awash with commentary after the official confirmation that US President George H.W. Bush engaged in patting multiple women on their backside in what he claimed was a "good-natured manner."

Bush, who served as America's 41st president between 1989 and 1993, released an official statement Wednesday apologizing for having "patted women's rears" in what was "intended to be a good-natured manner." The statement followed claims by actress Heather Lind, who accused Bush Senior of touching her repeatedly on her rear end and telling her a dirty joke at a promotional event in 2014.

Just in: Statement from George HW Bush on allegations by actress pic.twitter.com/hKBd4GHQgg

​A second woman, Jordana Grolnick, a New York theater actress, has come forward with a similar story, telling the online news website Deadspin that Bush groped her on the behind during a group photo while joking that his favorite magician was "David Cop-a-Feel."

and how many men has he "humorously groped"? George Bush senior apologises for ‘humorous’ gropes https://t.co/Vb3hjUcaHz via @BDliveSA

People are giving George Bush Sr a pass just because he's old? What about Joe Biden? I hold both Republicans & Dems to the same standard. https://t.co/p7soFmdCuL

​Others, meanwhile, tried to add some levity to the disturbing news by making below-the-belt jokes.

Just found out George Bush is a bigger perv than me. I keep all my thoughts in my head. #ThursdayThoughts

​Some users tried to turn the story into a case of what-about-ism, recalling the Bill Clinton sex scandal from the 1990s. Others still pointed out that President Donald Trump too seems to have some sort of immunity to such scandals.

I believe what G Bush Senior did was bad.. stupid.. awkward. Either he’s dumb or an old perv. Still, NOTHING compared to Bill Clinton.

Trump Grabs woman by the pussy, gets elected President

​WikiLeaks founder Julian Assange slammed the media for focusing on Bush Senior's sexual indiscretions, instead of what Assange described as war crimes in Iraq committed "on the back of fake news." Assange's views were echoed by others.

Good to see that the Washington Post is finally addressing the crimes of the now 93 year old wheelchair bound former president H W Bush who killed tens of thousands men and women in Iraq on the back of fake news (Kuwaiti incubators) https://t.co/CTlPhzLfB1 pic.twitter.com/pnrv5G0m1x

George H.W. Bush apologizes after actress accuses him of groping; when is GW going to apologize for war crimes. https://t.co/nNsnE0lrWK

​Some users said that the claims reveal a much deeper problem facing the US political elite, which seems to give people in high office, Republican or Democrat, a pass when it comes to sexual indiscretions.

If you’re wondering why women don’t come forward, this is why.

​Finally, a few users launched a bizarre defense of the former president, asking the media to leave him alone and suggesting that this scandal has been blown out of proportion.