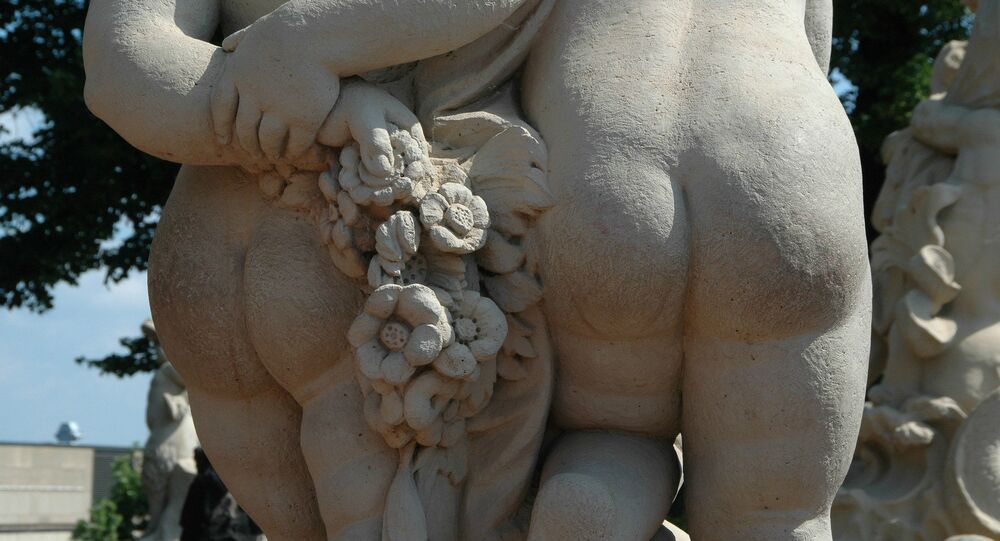 Fancy going exciting places and getting naked in them? Then the global trend called "naking" and originating from Norway is something you definitely should give a go.

Pictures of both men and women showing their hindquarters in attractive places and popular tourist destinations have become a new Instagram fad effectively replacing "planking" and other trends that have gone out of fashion.

Bare bottom aficionados from across the globe flock to the Instagram group Cheeky Exploits, which has rapidly soared in popularity and has currently over 269,000 followers. With its motto of "Spread the love!" the group, by its own admission, seeks to make the world a happier place through images of naked behinds taken everywhere from the Great Wall of China and the Eiffel Tower to Iceland's glaciers.

ADVENTURE | BUTTS These #butts look like they are on a pretty epic #adventure! It's a big world out there, have fun little #butts! Thanks for the #cheekiness, @tremendo305! #cheekyexploits #cheeky #butt #buttsofinstagram #spreadthelove #belfie

The provocative image trend originated in Norway and was started by the Norwegian Tourist Association's youth group (DNT Ung) as an April Fool's joke back in 2012, which claimed to arrange naked hiking tours in the Norwegian mountains. Nevertheless, a travel agency picked up the trend and arranged several photo contests, drawing hundreds of participants from across Norway.

© Photo : Ilosaarirock Festival / facebook
Naked Facts: Hundreds of Finns Strip Off to Set World Record in Skinny Dipping (PHOTO)
Hans Kristian Flaatten of DNT Ung later admitted that the joke was taken a bit too seriously, yet argued that getting naked on, say, a mountain top enhanced the experience, making it a bit more personal and unique.

The trend came into the international limelight after a rather critical article by the Independent travel editor Julia Buckley who accidentally witnessed an American tourist undressing himself for a cheeky selfie during a trip to Tromsø in northernmost Norway to see the northern lights. While Buckley considered this exorbitant behavior somewhat offensive to locals, her article nevertheless served as a catalyst, inspiring many like-minded daredevils to join the naked parade.

Buckley argued that this was not a generational phenomenon, ascribing the prevalence of young people in the trend to the fact that they are simply better at social media. She also argued that the trend would hardly have made any sensation, if only elderly men exposed their bottoms instead of young and curvy girls, the Norwegian daily Dagbladet reported.

© CC0
Par for the Course: Ballsy Naked Golfers Strike a Blow for Equality in Oslo
Torstein Borsheim Kyllesø, known as Fettleif on Instagram, is one of the active proponents of the recent fad, having undressed himself on a dozen different trips, including an ascent to Africa's highest peak Kilimanjaro.

"I have always liked making people laugh. For me, it's pure fun. The fact that there are other people around is no obstacle," Kyllesø told the Norwegian daily Dagbladet. "Now my friends expect me to get undressed every time we go out," he added.

Some advocates of naking are keen on being body positive, sharing their love for the human body in nature, whereas others see it as an ultimate expression of freedom. While many are indeed annoyed at the indecent exposure, one has to admit that the naking trend is still less offensive than its predecessor "nutscaping" in which pictures of bare genitals overhanging picturesque landscapes were posted. Regardless of the scenery, the scrotum was a key element of the performance.

SEA | BUTT This butt is very happy to be greeting the #sea in #France! Thanks for the #cheekiness, @nikodud! #cheekyexploits #cheeky #butt #butts #buttsofinstagram #spreadthelove #belfie #cancale