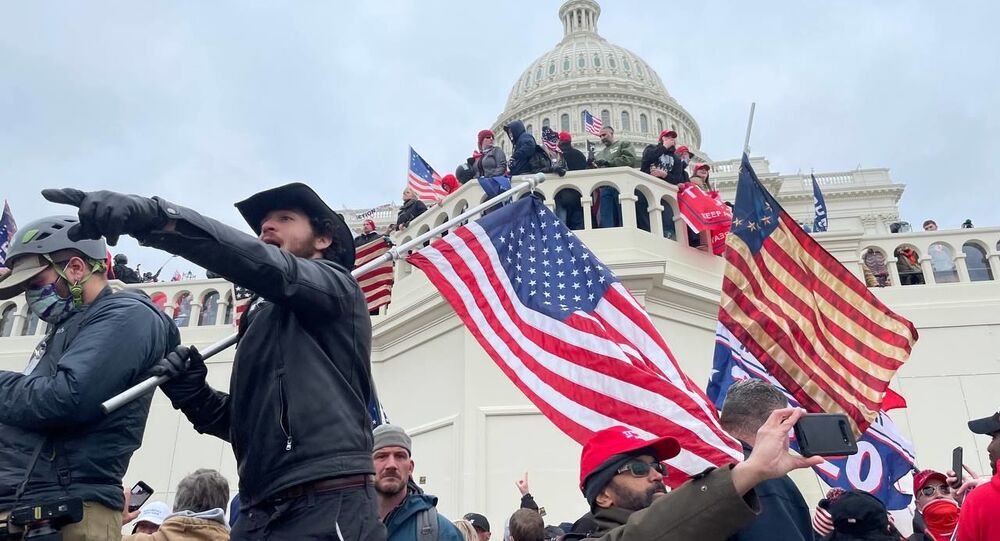 The FBI has been engaged in a manhunt for January Sixers, having arrested over 500 suspects involved in the 6 January DC breach. However, the FBI's methods, rationale and conduct have triggered concerns among conservative observers who regard 6J detainees as no less than "political prisoners."

On 24 June, Attorney General Merrick B. Garland issued a statement concerning the ongoing investigation into the 6 January attack on the Capitol. According to the attorney general, the Department of Justice has reached several benchmarks, including the crossing of the threshold of 500 arrests and the 100th arrest of "a defendant on charges of assaulting a federal law enforcement officer."

"I could not be more proud of the extraordinary effort by investigators and prosecutors to hold accountable those who engaged in criminal acts that day," AG Garland stated. "Particular credit goes to those serving as prosecutors and agents in Washington, DC, as well as those in FBI field offices and US Attorney’s Offices across the country, and with the Department’s National Security Division."

The bureau's manhunt for "domestic terrorists" continues: between 23 June and 1 July at least 17 people were arrested from Florida to California. However, conservative observers and GOP lawmakers argue that there is nothing to be proud of, as many of those arrested could hardly be called "extremists," while they have also been harassed, intimidated and subjected to apparent human rights violations.

Earlier last month, Senators Ron Johnson (R-Wisc.), Mike Lee (R-Utah), Ted Cruz (R-Texas), Rick Scott (R-Fla.) and Tommy Tuberville (R-Ala.) sent a letter to AG Garland citing concerns about the handling of the 6 January probe. The lawmakers asked, in particular, as to how many people who may have committed crimes associated with the Capitol breach were arrested by law enforcement using pre-dawn raids and SWAT teams; how many of the 6 January defendants are incarcerated; how many of them were placed in solitary confinement and for how long; and how many of those detained have been released on bail.

© REUTERS / POOL
Empty chairs are arranged for social distancing, ahead of U.S. Attorney General Merrick Garland’s remarks on voting rights, inside the Great Hall at the U.S. Department of Justice in Washington, U.S., June 11, 2021.

There is no smoke without fire and the concerns of the Republican congressmen have certain grounds, according to Julie Kelly, a political commentator, author and senior contributor to American Greatness (AG), who has been monitoring and studying cases of 6 January defendants for several months.

One of the FBI's "big catches" was 69-year old Lois Lynn McNicoll, a Los Angeles County public employee who was arrested on 28 June. According to Kelly, the FBI tracked her down at work and interviewed her without an attorney present.

"So, what did this alleged domestic terrorist do?" the AG commentator asked in her 1 July op-ed. "A little before 3:00 pm on 6 January, McNicoll entered the Capitol building through an open door. Surveillance video captured by the US Capitol Police security system… shows McNicoll taking a few photos inside the building. After being ushered out of the building by police, she exited the complex about 30 minutes later."

Earlier, on 24 June, the FBI arrested a Florida pastor and his son for their alleged involvement in the January 6 protest. The son, Casey Cusick, was handcuffed in front of his three-year-old daughter, video footage obtained by American Greatness shows. Cusick’s father, James, the founder and pastor of a church in Melbourne, Florida, also was arrested. Neither of the Cusicks was accused of violent crimes related to the DC incident, according to the media outlet.

whether defendant followed Q or was a member of the Oath Keepers or Three Percenters. (She had no idea what they were talking about.)

Also asked if he was abusive to her.

​"Just talked to a J6 defendant spouse," Kelly tweeted on 1 July, citing another case. "20 FBI agents raided their house at 9:30pm on a Sunday. Arrested defendant in front of 4-year-old. Agents asked her about their political affiliation, who they voted for, views on immigration and the wall. Asked what news they watched. Whether the defendant followed Q or was a member of the Oath Keepers or Three Percenters… No lawyer present."

In Part 2 of this two-part interview, Joseph Bolanos describes how the FBI raided his apartment, humiliated him in front of the media, and wrecked his health--all because a tipster falsely linked him with the January 6 protesters who entered the U.S. Capitol. pic.twitter.com/3NwX62v5PA

​The old man was handcuffed and detained for three hours just because a tipster falsely linked him with the January 6 protesters who entered the US Capitol. D'Souza drew attention to the fact that the FBI somehow managed to convince the district judge, Gabriel W. Gorenstein, that they had probable cause to get a warrant to ransack Bolanos' home.

"The big mystery is… how could the FBI do so much, I mean double teams, raids… on a word of one person on a tip line?" Bolanos asked. "That almost seems bizarre simply because had they checked my geolocation on my phones they would have realised right away where I was at 1 o'clock, where I was near the Capitol but not at the breach. And they never checked that."

But that is not all. There are a number of detainees who are being held behind bars with no possibility of bail although they do not have criminal records and are not accused of violent crimes, according to conservative observers. One of them is Jacob Chansley, commonly known as the "QAnon Shaman."

Chansley has been in federal custody for over 150 days awaiting trial on six criminal charges, including "violent entry." It was reported that the man has mental problems which were documented as far back as 2006 when Chansley served in the US military. Chansley's attorney insists that his client needs mental health services. He has repeatedly asked the judge overseeing the case to release the defendant before the trial.

On the eve of the QAnon white supremacist domestic violent extremist 9/11-like attack on our democracy, I thought I'd post some of my first tweets.

This aged well. (Tragically, Jacob Chansley has been behind bars for almost six months even though he committed no violent crime.) https://t.co/A6wdyrg9EE

​However, a federal prosecutor argues that "the time is 'not ripe' yet to revisit whether Chansley should be detained until the psychiatric evaluation is completed," Reuters reported on 1 July, adding that the defendant is undergoing a mental health evaluation by the US Bureau of Prisons.

Lawyer says Chansley in his cell 23 hours a day now for 150 days. Notes that even the sanest person would go mad.

Lamberth abruptly ends hearing, says he'll rule as soon as he can. WHY NOT TODAY?

​For comparison's sake, another 6 January rioter, John Earle Sullivan, the founder of Insurgence USA racial justice group, who had been arrested prior to his participation in the breach, was released by the court in January 2021 on strict pre-trial conditions and wasn't jailed in February after violating them.

Richard Barnett, 60, who was photographed with his feet on Nancy Pelosi's desk, had spent almost four months in solitary confinement being refused bail even though he has no criminal record and wasn't charged with violent crimes apart from "violent entry". Eventually, his lawyer, Joseph McBride, managed to secure his pretrial release. Currently, Barnett is under house arrest in Gravette, Arkansas.

The New York Post's Miranda Devine quoted Barnett complaining about the inhumane conditions in the DC prison where he was held along with other January Sixers. The journalist highlights that "lawyers haven’t exactly been flocking to defend Trump voters charged in the Capitol riot."

"It’s an unpopular cause, and likely to lead to an attorney being shunned by colleagues or worse, and the defendants for the most part can’t afford to pay legal fees," she wrote on 27 June.

According to the Post, prosecutors offered Barnett seven years in jail in exchange for a guilty plea, which the 60-year old rejected.

"We are charged with every possible offense and held in the DC jail on solitary [sic] confinement and treated inhumanely," reads an email by Jonathan Mellis, a detained January Sixer, published by America Greatness on 10 June. "Solitary Confinement and beatings. That is our reality. When will the inhumane treatment end? I just want to let everyone know the reality of how we are treated in this place. Left wing rioters are not even held in jail. Much less subjected to the harsh and inhumane treatment my fellow Capitol rioters and I have survived so far this year."