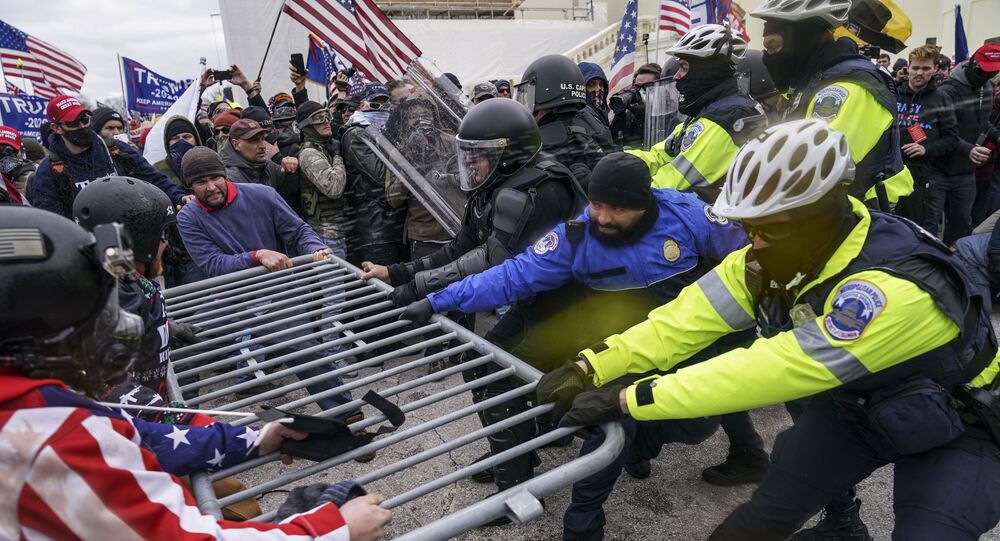 What Was Utah Racial Justice Activist John Sullivan Really up to During 6 January Capitol Protests?

John Earle Sullivan, 26, is the founder of the racial justice group Insurgence USA. He participated in the 6 January Capitol breach but claims he's a journalist and was only there to record the protests. Now Sullivan faces a total of eight criminal counts, according to court documents released last week. How will the case pan out for him?

Sullivan was arrested by the DOJ on 14 January in Utah and released conditionally without bail by a federal court, despite prosecutors insisting that the protester remains a danger to the community. Earlier, on 13 July 2020, the Utah resident was charged with rioting and criminal mischief related to his activities around a 30 June 2020 protest during which a civilian was shot and injured.

At that time observers questioned this apparently kid-glove treatment of Sullivan, given that other Capitol protestors like Jacob Chansley, also known as the "QAnon Shaman," and Richard Barnett, who was photographed with his feet on Nancy Pelosi's desk, were put behind bars. Barnett was refused bail even though he has no criminal record and faces no violent charges, as American Greatness' Julie Kelly detailed on 25 May. To date, federal prosecutors have charged over 400 people in connection to the 6 January Capitol breach.

After seizing Sullivan's funds linked to alleged crimes, the DOJ has now brought additional charges against the racial justice activist, including weapons charges. According to court documents, Sullivan said "Hey guys, I have a knife. Let me up." In addition to that, the Utah resident was allegedly heard bragging of bringing a megaphone to instigate the riot:

"I brought my megaphone to instigate s**t. I was like, guys we’re going inside, we’re f***ing s**t up.... I’m gonna make these Trump supporters f*** all this s**t up," Sullivan allegedly told a witness after leaving the Capitol on 6 January.

Sullivan also brought a camera to the Capitol building to record the protests and portrayed himself as a journalist who was documenting the incident. However, investigators have not found any connection or arrangements made between Sullivan and any news organisation prior to the DC incident.

"Sullivan may be the luckiest 'journalist' in Washington DC," says investigative journalist and founder of Crowdsource the Truth Jason Goodman. "He captured stunning, up close footage of Ashli Babbitts' killing from start to finish. He promptly sold it to CNN and NBC for as much as $90,000. The money has now been seized by the Department of Justice."

At the same time, the 26-year-old appeared to be actively participating in the breach, calling on others to "burn this s**t down." "There are so many people. Let’s go. This s**t is ours!" He could also be heard saying, "I am ready bro. I’ve been to too many riots. I’ve been in so many riots."

Uber previously featured #BLM Capitol Hill riot suspect John Earle Sullivan in a commercial. He was arrested yesterday & charged with violent entry & disorderly conduct on Capitol grounds & more. Last summer, he was charged over a BLM-antifa riot in Utah where a person was shot. pic.twitter.com/RHd7lehz5K

​The racial justice activist's support of Trump is questionable given he was seen at a Washington DC racial justice gathering in August, saying: "We gotta… rip Trump right out of that office right there," and "It's time for revolution." At the same time, Black Lives Matter's Utah chapter earlier disavowed Sullivan, calling him a reckless agitator and a "loose cannon." Others suggested that he could be a "double agent."

​It is unclear what John Sullivan was doing in the Capitol during the riot, says Goodman, who interviewed him in March 2021. According to the journalist, it's just as likely that the Utah resident is an adventurist – who has implicated himself by sharing his footage of the breach – or a well-trained provocateur.

Sullivan Was Prepared for the Breach

Goodman draws attention to the fact that Sullivan was well prepared and equipped for the incident: the individual had a camera, megaphone, ballistics vest, tactical pants, and gas mask. Speaking to the journalist on 5 March 2021, Sullivan confirmed that he had known about the upcoming storming of the DC Capitol as it was on "social media prior to this."

"Wait a minute," Goodman said. "What do you mean 'on social media prior to this'? Planning for what happened at the Capitol?"

"Ye-eah," Sullivan responded. "Flyers have been passed around by various groups saying that they are going storm all Capitols on 6 January."

Indeed, around 4 January, the racial justice activist posted a livestream on social media saying that he was in DC for forthcoming protests: "It’s going to be massively insane… If it’s a mixture of Trump people and Black Lives Matter people, damn, that’s even more intense for me, that’s something I want to see," he allegedly said.

The reason John Earle Sullivan's CNN/NBC proceeds from the death of Ashli Babbitt were seized by the DOJ was he can be seen on his own footage inciting the crowd as he films - he yelled "Go go go! Get this sh*t!" moments before she was shot https://t.co/4ymfCPUAaQ pic.twitter.com/vHDGwKSC1l

​Still, most of the crowd that gathered at DC on 6 January apparently had no idea about the forthcoming storming of the Capitol, Goodman notes. The investigative journalist, who did not breach the restricted area with thousands of other Trump supporters on 6 January, points out that only a small minority of demonstrators broke into the Capitol building.

According to Goodman, who talked to the Insurgence USA founder for more than an hour on 5 March, Sullivan appears to be smart and choosing his words wisely while on record. Judging from this, it would be hard to imagine that the 26-year-old did not know about the potential risks associated with entering restricted grounds without permission, let alone recording himself entering the restricted area, according to the investigative journalist.

"Sullivan’s confidence belies his age particularly given the serious legal jeopardy he is in. He behaves like someone who believes he will be 'protected'. Perhaps this is due to the multiple instances when Antifa groups and racial justice activists were caught and then released last year, or perhaps he knows something we don’t know," Goodman says.

Meanwhile, the Sullivan case and his controversial behaviour evoke memories of Newsweek's 17 May story about the Pentagon's "clandestine army" of "soldiers, civilians, and contractors [who are] working under false identities," according to Goodman. In addition, it's also reminiscent of one of the Biden administration's apparent plans to use private individuals and contractors to infiltrate right-wing chat rooms and track potential "domestic extremists," reported by CNN.

The Crowdsource The Truth founder does not rule out that not only Sullivan "instigated" rioters on 6 January: apparently, there could be other individuals who, like the 26-year-old, weren't actually "Trump supporters."

The Capitol breach has left a lot of unanswered questions, the journalist says. For example, it still remains unclear who planted two explosive devices near the Capitol in Washington, DC ahead of the protests. It's mind-boggling that this person has not been found yet given the number of surveillance cameras in the US capital.

According to Goodman, the Sullivan case may potentially shed some light on this: "There is a long trial ahead," he says. "It remains to be seen if Sullivan is simply young, dumb and overconfident or if he indeed has a powerful guardian angel making sure he stays out of trouble.