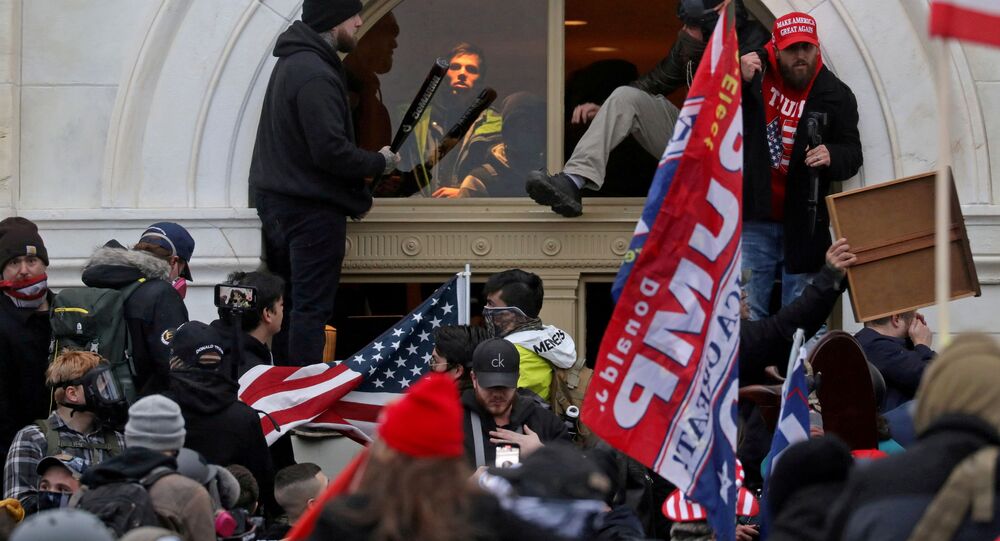 Tucker Carlson has doubled down on claims he first floated on 15 June that the Capitol riots on 6 January were an “inside job” and those named as “unindicted co-conspirators” in court documents were actually agents of the Federal Bureau of Investigation (FBI).

Over 550 people have been indicted in connection with the violence that erupted as Congress met on 6 January to certify Democrat Joe Biden’s win in the 2020 presidential elections. The charges range from assault on law enforcement to trespassing on government property and property damage.

© REUTERS / Shannon Stapleton
Pro-Trump protesters storm into the U.S. Capitol during clashes with police, during a rally to contest the certification of the 2020 U.S. presidential election results by the U.S. Congress, in Washington, U.S, January 6, 2021

According to Carlson, there were a number of people in the crowd at the Capitol that day that had been in previous contact with the FBI regarding impending events.

"We won't shut up, and we shouldn't. It could not be more obvious at this point that the government is in fact hiding something, probably quite a few things." pic.twitter.com/DNG4Oof9GC

​Carlson insisted that “it would not be out of character” for the FBI, that he underscored had a history of pushing people to “commit crimes".

“…They've done things very much like that before… That is beyond dispute,” he said.

The Fox News host insisted that it “could not be more obvious at this point… that the government is in fact hiding something, probably quite a few things".

“Best to abandon theatrics and find out what they are hiding, that's our job,” he said.

Tucker Carlson said the FBI needed to answer three questions: how many of the rioters “had a relationship with the agency”; why the FBI, if aware of the plans, failed to make a greater effort to stop the mayhem: and, thirdly, why 10,000 hours of footage from the Capitol had not been released.

Carlson also referenced his earlier statements, made on Tuesday, as having resulted in the media becoming “hysterical when we mentioned it”.

“You can't say that, they screamed, that's not allowed!”, responded the “obedient minions of the National Security stage”, according to Carlson,

He went on to say that Twitter had weighed in, to reassure that “agents of the FBI were just FBI informants, so shut up”. Branding the response as “hilarious”, Tucker Carlson vowed that “We won't shut up, and we shouldn't”.

Earlier in the week, Carlson had referenced a report in Revolver News, which ostensibly studied the indictments of people charged over the 6 January unrest.

Many of the indictments mentioned “unidentified co-conspirators”, alleged to have taken part in the organisation, planning and execution of the mayhem on 6 January in various capacities.

The Fox News host seized upon this as evidence of a cover-up, saying:

“We know that the government is hiding the identity of many of the law enforcement officers who were present at the Capitol on January 6… What does that mean? It means that potentially with every single case they were FBI officers. Really, in the Capitol, on January 6th,” he alleged.

Carlson also questioned why more than 10,000 hours of footage from the events that transpired that day at the Capitol building were yet to be released.

“Even as they call for more openness. We could release those tapes today, but they are not. Why?” queried Tucker Carlson.

The protests erupted at the Capitol on 6 January as the joint session of the US Congress was preparing to certify Electoral College votes in favour of Democrat Joe Biden. Five people, including a Capitol police officer,  died in the wake of the events. The breach of the Capitol erupted about 2 miles (3.2 km) from the White House, where Trump reiterated election fraud claims during a “stop the steal” rally.

© AP Photo / J. Scott Applewhite
Supporters of President Donald Trump carry flags and signs as they parade past the Capitol in Washington after news that President-elect Joe Biden had defeated the incumbent in the race for the White House, in Washington, Saturday, Nov. 7, 2020

Trump had been insisting that the elections had been “rigged” against him by measures such as electoral misconduct involving mail-in ballots, voting machines, and voting site machinations. While his campaign filed a plethora of lawsuits in over half-a-dozen states, they were all thrown out by the courts.

While urging his supporters to “never give up” in his speech, Trump urged people to “stay peaceful” and “go home” on Twitter.

In the wake of the events, Democrats, Democrat-aligned social media and even some anti-Trump Republicans pointed the finger of blame at the then-president.

Democratic lawmakers in the House capitalized on the developments to impeach Trump for a second time, seeking to bar him from ever running for public office again. However, the impeachment trial collapsed in the Senate in February, when Trump was already out of office.