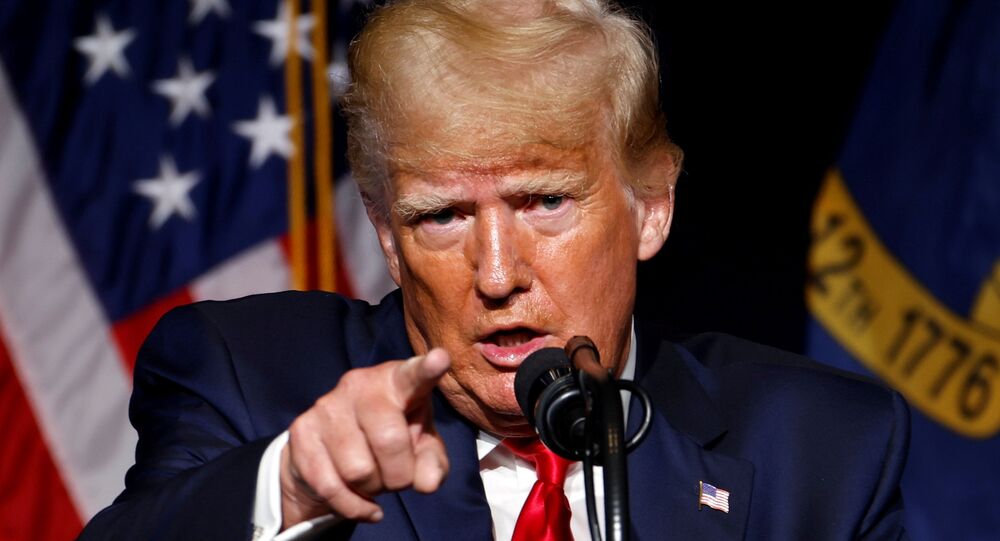 The 45th president made the statement during a video message that was live-streamed at a Frank Speech rally in New Richmond, Wisconsin. The Republican reiterated his claims about Democrats rigging the 2020 presidential election and harshly criticised the Biden administration for reversing his migration policies.

Former US President Donald Trump has launched yet another scathing attack on liberal media, which he said had accused him of spreading "lies" and "conspiracy theories", but later found out that he was right from the beginning.

"We were right! Listen to this: Hydroxychloroquine works. The virus came from a Chinese lab - it just came out. Hunter Biden's laptop was real. They tried to say it was made by Russia. Russia. Russia. Russia. Lafayette Square was not cleared for a photo op. That just came out and I want to thank the Inspector General for having the courage to come out with the truth. The 'Russian Bounties' story was fake. Remember that?", Trump told the audience at a Frank Speech rally.

At the beginning of the coronavirus pandemic, the Republican as well as several doctors alleged, that the anti-malaria drug hydroxychloroquine, known as HCQ, was effective against COVID-19. The mainstream media and the majority of scientists ridiculed the politician for promoting HCQ, saying there is no evidence that it is beneficial for COVID-19 patients. The World Health Organisation too said that the drug was not effective in combating the disease.

Yet, over the past year, several studies have come out suggesting that HCQ may increase survival rates of patients dealing with severe cases of COVID-19.

Photo Op at the Church

Last June, Trump found himself the subject of harsh criticism after he participated in a photoshoot with a Bible in front of St John's Church in Washington, DC. The photoshoot occurred at a time when the United States saw massive protests against racial discrimination and police brutality.

© AP Photo / Patrick Semansky
President Donald Trump holds a Bible as he visits outside St. John's Church across Lafayette Park from the White House Monday, June 1, 2020, in Washington. Park of the church was set on fire during protests on Sunday night. (AP Photo/Patrick Semansky)

Police repeatedly used force while dispersing demonstrators and did so again on the day Trump participated in the photoshoot. Critics of the president claimed that he ordered the removal of protesters from nearby Lafayette Park so that he could pose for a photo.

On 9 June, the US Department of the Interior released a report exonerating Trump.

"The USPP, in coordination with the Secret Service, determined that it was necessary to clear protesters from the area in and around the park to enable the contractor's employees to safely install the fence", the report said.

That same month The New York Times reported, citing US intelligence officials, that Russia allegedly offered bounties to Taliban-linked militants for killings of NATO forces in Afghanistan, including US personnel. The news came amid peace talks between the US, Afghan officials, and Taliban militants to end the two decades-old war.

© AP Photo / Allauddin Khan
Taliban Political Chief Slams Allegations of 'Russian Bounties' on US Soldiers as 'Complete Lie'
The NYT's report sparked outrage, with Democrats pressing Trump to confront Moscow on the issue. Some critics suggested that Trump reportedly knew about Russia's alleged proposals, referring to long-standing claims that the Republican colluded with the Kremlin. Back then, Joe Biden accused Trump of "betrayal of the most sacred duty we bear as a nation".

This April a senior official from the Biden administration said US intelligence had "low to moderate" confidence in the report on Russia's alleged bounties.

Was it a Lab Leak?

One of the biggest accusations against Trump was his allegation that the coronavirus outbreak occurred due to a leak in a laboratory in the Chinese city of Wuhan, where the first cases of COVID-19 were reported. Trump and his allies accused Beijing of a cover-up, also hinting that the virus could have been deliberately released.

The scientific community dismissed the allegations of a lab leak as wild conspiracy theories. The World Health Organisation too rejected this scenario, saying in a report written jointly with Chinese scientists, that it is "extremely unlikely" COVID-19 was man-made.

At the end of May, The Wall Street Journal wrote, citing previously undisclosed documents compiled by US intelligence, that three employees of the Wuhan Institute of Virology sought medical care for a disease similar to COVID-19, three weeks before Chinese authorities reported the first case of COVID.

© AFP 2021 / NOEL CELIS
'Lab Leak': Why US & EU Shoot Themselves in Foot by Stirring Anti-China Stunt Amid Soaring Inflation

The report prompted a change in attitude towards the lab leak scenario, with several officials voicing regret that the international community did not pay attention to this hypothesis. Around the same time, the Biden administration announced that it would launch a probe into the emergence of COVID-19.

On Saturday, World Health Organisation head Tedros Adhanom Ghebreyesus said the lab leak scenario could not be ruled out and called on China to help the international community find out the origins of the virus, which according to Johns Hopkins University has killed almost 3.8 million people so far.

Other Accusations and Criticism of Biden Administration

During his speech at the Frank Speech rally Trump also blasted the liberal media for not covering the exposé on Hunter Biden. Last October, the New York Post wrote a story, which it said was based on the contents of a laptop, the second son of Joe Biden reportedly left at an IT store in Delaware and never retrieved.

© AFP 2021 / -
Hunter Biden Says 'Laptop From Hell' Could 'Absolutely' Be His, Blames Thieves, Russian Spies
The newspaper's story suggested that Joe Biden was involved in his son's business dealings in Ukraine and China during his tenure as vice president, which may constitute a conflict of interest.

The former president also harshly criticised the Biden administration for the reversal of his migration policies, which Trump argued has led to the ongoing crisis on the nation's southern border.

"Our border security programmes were vitally important and unprecedentedly successful. All Biden had to do was to leave it alone. So we went from the most successful and safest border in the history of our country to the worst and most dangerous. Drugs are flowing in at a level we've never seen before. There is human trafficking. Nobody has ever seen numbers like this", the Republican said to the rally organised by infamous MyPillow CEO Mike Lindell.