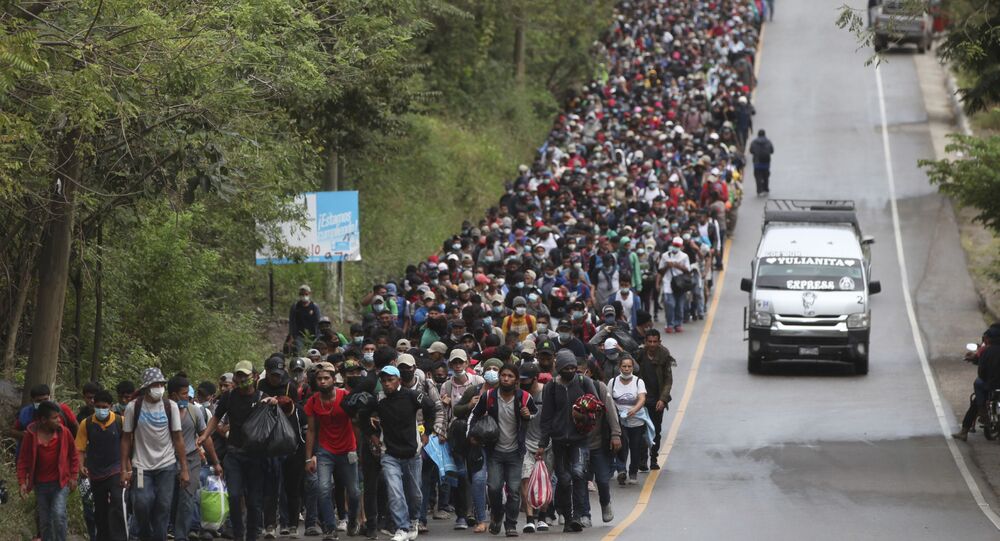 The migration crisis is showing no sign of ceasing in the US, where the Border Patrol is tackling an unprecedented number of illegal immigrants approaching the country’s southern border.

The US Border Patrol has detained a number of gang members who attempted to enter the country via a southern border checkpoint in Texas as part of the migrant flows.

Laredo Sector Chief Patrol Agent Matthew Hudak tweeted earlier this week about nabbing “5 gang members in 7 days”, including those from the international gang MS-13 and the 18th Street criminal group.

MS-13, or Mara Salvatrucha, was formed by Central American immigrants in Los Angeles and is notorious for its cruelty. The gang’s motto is believed to be "mata, viola, controla", which means “kill, rape, control”.

5 gang members in 7 days! #Laredo Sector #USBP agents arrested a total of 5 gang members in the last week, including an #ms13 & two 18th Street gang members. They attempt to evade arrest by exploiting the influx of migrants attempting to enter our country. #bordersecurity pic.twitter.com/y5vVJQO50K

Hudak added in a tweet that the gangsters tried “to evade arrest by exploiting the influx of migrants attempting to enter our country”.

The remarks followed Texas Attorney General Ken Paxton tweeting in mid-April that upon visiting “the facility in San Antonio full of 2,000 unaccompanied minor boys”, he was “absolutely concerned about the nexus with MS-13”.

Paxton voiced his concern as the US remains in the grip of a migration crisis, something the White House has repeatedly refused to admit, preferring to describe the situation on the southern border as a "vital human challenge”.

This week I visited the facility in San Antonio full of 2,000 unaccompanied minor boys. After seeing this, I’m absolutely concerned about the nexus with MS-13, or “Mara Salvatrucha.” We’ve already shown from the past that some of these unaccompanied minors end up in MS-13. https://t.co/ISRRNLk6PS

US Customs and Border Protection (CBP) detained more than 100,000 migrants at the border in February, and encountered some 171,700 more individuals in March, including almost 19,000 unaccompanied minors – a new record, eclipsing the 11,861 unaccompanied minors detained during the 2019 migration surge.

The southern border crisis began shortly after Biden started to reverse Trump's hardline immigration policies upon assuming office on 20 January 2021. The POTUS halted construction of a border wall, moved to end "harsh and extreme immigration enforcement", and pledged to "restore and expand" the asylum system.

© REUTERS / POOL
US Opens 17th Facility to Hold Asylum-Seeking Migrant Children - Social Services Agency
Other moves included rescinding the Trump travel ban and promising a "path to citizenship" for more than 11 million undocumented immigrants already living in the US.

The severity of the migration crisis, however, has apparently pushed the Biden administration to mull bringing back some of Trump’s migration policies. Last month, media reports claimed that the US president was considering resuming construction of the border wall to "plug gaps" in the current network of barriers to contain migration flows.