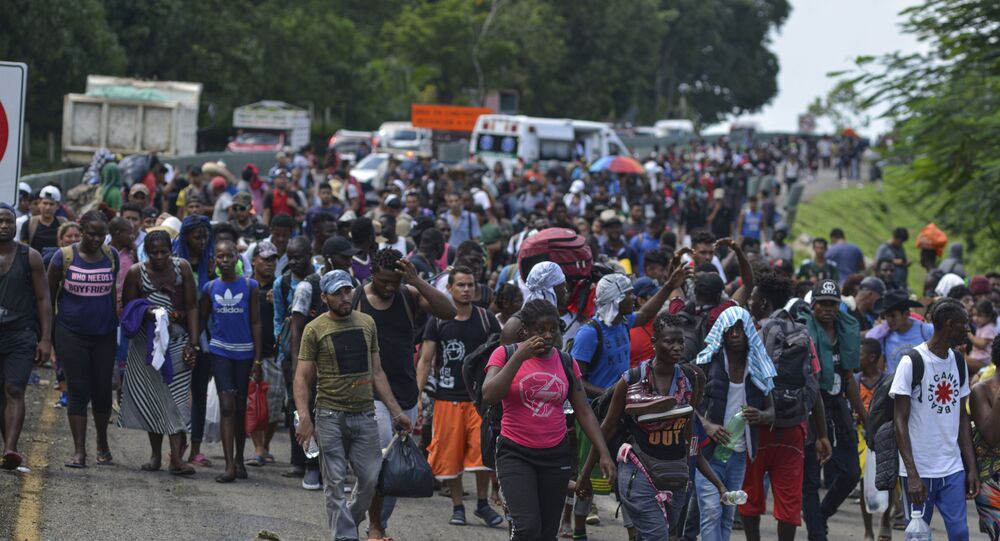 Neither Kamala Harris nor President Joe Biden have made a trip to the US southern border yet, only indicating that they plan to visit the area at "some point", in the face of an ongoing migration crisis in the country.

Brandon Judd, president of the US National Border Patrol Council (NBPC), has argued it's only natural that Vice President Kamala Harris has not travelled to the country's southern border since POTUS appointed her the point person last month to lead the US administration's efforts to tackle migration.

"Because if she goes to the US border, people are going to expect her to fix the problem, so she avoids it", Judd told Fox News on Saturday, adding that "putting politics ahead of what's best for this country" is a "disgusting" fact.

The NBPC president pointed out that visiting the southern border to view the migration crisis firsthand is "what the president and the vice president are supposed to do", an apparent nod to neither Harris nor President Joe Biden having travelled to the area.

Judd also threw doubt on the effectiveness of the Biden administration's so-called "catch and release" system, stipulating that migrants be freed in the US after detention on the border.

"As long as we continue to release people into the United States after they violate our laws, with no consequences, people are going to continue to come. That's the simple fact", he asserted, referring to the ongoing surge in apprehensions of refugees in the US-Mexico border region.

The NBPC chief said that Border Patrol agents had apprehended more than 1,600 migrants over the past 24 hours, something that is "really getting pretty much at a point they haven't even seen in their 20-year career".

With the US having "the biggest open arms, we want to accept people into this country but we want to do it legally, not illegally", Judd underlined.

© REUTERS / PAUL RATJE
Unaccompanied child migrants are seen at the site of a former oil field workers camp which is being used as a temporary housing facility in Midland County, Texas, U.S. April 8, 2021

He accused both right-wing and left-wing US politicians of trying to politicise migration-related issues, but alleged the left was more to blame.

The remarks came as President Biden referred to the situation on the southern border as a "crisis" for the first time since assuming office in January, adding that his administration is "going to increase the number [of refugees]".

This followed reports that Biden is considering restarting the construction of former POTUS Donald Trump's southern border wall that the US president himself previously put the brakes on, in a bid to tackle the increasing surge of migrants near the American-Mexican border.

© REUTERS / ADREES LATIF
Border Crisis: Who Wants to Flood the US With Migrants and Why?
Biden's move to freeze construction of the border wall was earlier slammed by Trump, who argued that when he was POTUS, the country's southern border was "in great shape – stronger, safer, and more secure than ever before".

The comments were preceded by Homeland Security Secretary Alejandro Mayorkas predicting that before the end of this year, the US may apprehend more migrants on its southern border than it has over the past 20 years.