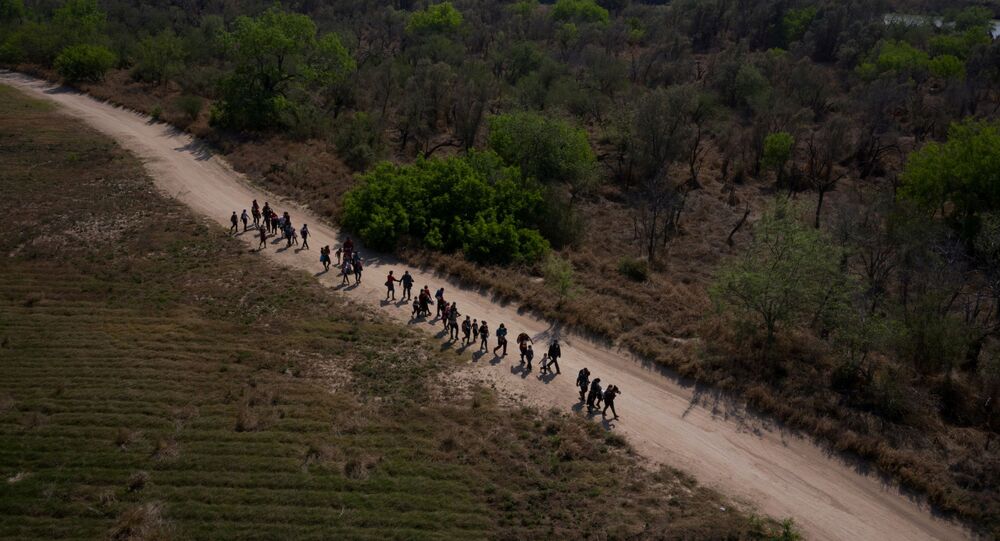 RIO GRANDE VALLEY/REYNOSA (Sputnik) - President Joe Biden by reversing his predecessor's strong immigration policies has fueled a record-pace influx of migrants at the US southern border, a crisis which is likely to get even worse in the coming months, former Customs and Border Protection (CBP) sector chief Victor Manjarrez told Sputnik.

On Thursday, CPB data revealed that US border apprehensions soared by more than 70 percent in March. The 172,331 migrant encounters recorded represents the highest monthly total in more than two decades, with the Biden administration on pace to top the previous annual record set in 2019 of over 977,000 apprehensions. The president and other administration officials have said the surge is seasonal.

Biden shortly after taking office terminated many of Trump's immigration measures including construction of a wall along the 2,000-mile border with Mexico. The Trump administration was able to construct 400 miles of large steel wall structure despite lengthy court battles and opposition from Congress.

Manjarrez, who served as a CBP sector chief in El Paso, Texas, and Tucson, Arizona, said the surge of migrants coming to the United States is expected to worsen if the Biden administration does not impose a deterrent.

"It's going to be a bigger mess because the numbers are growing... the number is going to continue to increase, it's not going to go down because there is no such thing as seasonal anymore," Manjarrez said. "The seasonal trends haven't occurred in over two decades."

Moreover, he said, the actual number of migrants coming into the United States illegally is higher than the CBP numbers.

"It's just simply hard to keep up... Our concerns become what's being missed, that's the scary part," Manjarrez said. "Criminal elements do exploit that because the Border Patrol resources are vulnerable to exploitation. It's like any law enforcement entity, there's no way you can be everywhere all the time."

The former sector chief said what ended up getting lost is that the border wall was a "tool."

"What that tool does is it reduces the types of people that cross that area. What you saw in those gaps were probably family units. More than likely you're not going to have a family unit that is going to go over a barrier," he said.

The border wall "turns seconds into minutes," buying law enforcement time to respond to illegal entries into the United States, Manjarrez said, adding that "a barrier is worth its weight in gold in the urban and rural area."

© REUTERS / JOSE LUIS GONZALEZ
Asylum-seeking migrant children from Central America, who was airlifted from Brownsville to El Paso, Texas, and deported from the U.S. with their family, wait before entering the "Kiki Romero" gym that was adapted as a temporary shelter, in Ciudad Juarez, Mexico April 5, 2021.

Although Biden kept Trump's policy to expel illegal migrants with COVID-19 symptoms, illegal migrant children who arrive at the border without a legal guardian are exempt from the rule, which has contributed to a record number of them being held in US facilities.

According to data released by CPB on Wednesday, the US has more than 20,000 unaccompanied migrant children in federal custody, an increase of over 2,000 from the previous week.

Manjarrez said the humanitarian aspect of the immigration crisis is "turning out to be a mess."

"You're starting to see kids dropped off in dangerous places," Manjarrez said. "That didn't happen before."

Manjarrez attributed such phenomena to Biden’s change in policy and the president’s idea that the border is "open."

Manjarrez said smugglers have raised their prices - a Mexican national is paying about $6,000 to $7,000 to cross illegally in the El Paso-Juarez border region. Migrants from Northern Triangle countries - Guatemala, Honduras, and El Salvador - are paying about $10,000 per person, he said.

Addressing the root causes of migration from the Northern Triangle countries is welcomed but deterring the influx requires a combination of long-term and short-term solutions, he added.

Biden said he reversed Trump's immigration policies because they were unwarranted, inhumane and inconsistent with America's values. The president and other officials have also said surges tend to respond to "hope" of more humane policies under a new administration.