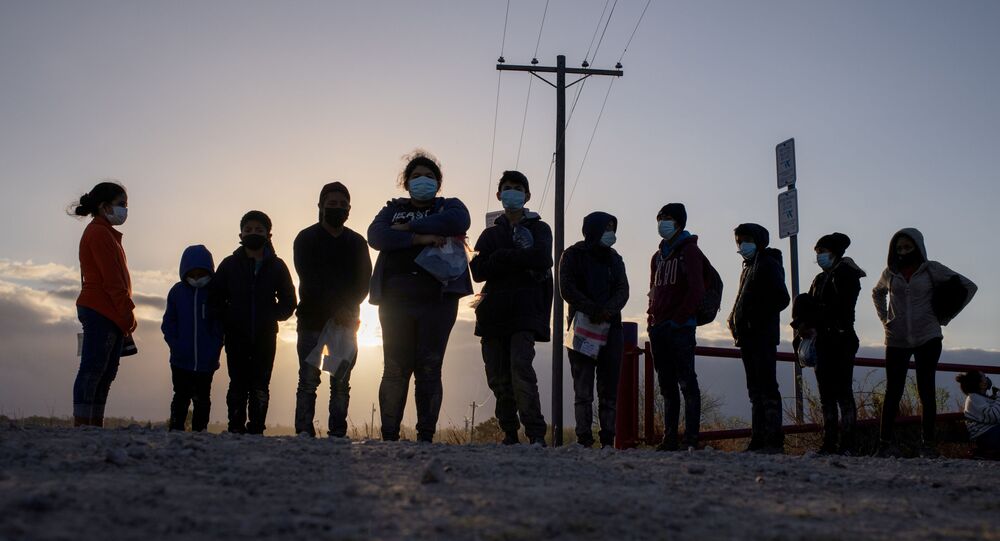 Sign of Desperation? Guatemalan Migrants Lured by Smugglers Into Entering US, Report Says

In mid-March, President Joe Biden warned migrants against making the journey to America, in a statement that came amid his administration's efforts to tackle a growing surge of refugees on the US-Mexico border.

Some Guatemalan residents are still eager to leave their country for the US in a sign of "desperation", even despite the US government's migrant-related warnings not to make the perilous journey, CBS News reports.

According to the US news outlet, Guatemalans are being lured into going to the US by smugglers who are advertising the trip to America for a certain price tag, which may reportedly amount to tens of thousands of dollars.

Some such migrants, CBS News said, hope to find better work in the US and are willing to flee Guatemala, pounded by two powerful hurricanes late last year.

Several areas of Guatemala hit by hurricanes #ETA and #IOTA are still out of reach due to high water levels.

As roads open, our @ECHO_LatAm team moves forward to meet communities, understand their needs and coordinate an effective response. pic.twitter.com/6DzIjgvBYs

The developments unfold after the Biden administration placed around 28,000 radio ads in Latin America as part of a stepped-up campaign to discourage people from travelling to the US. The message is "Don't put your children's lives at risk over false hopes".

The ads come amid reports that President Joe Biden is considering restarting the construction of former POTUS Donald Trump's southern border wall that the US president himself put the brakes on in January, in a bid to tackle an increasing surge of migrants near the American-Mexican border.

The reports followed Biden thanking newly naturalised citizens for choosing his country as their final destination as he welcomed his "friends" and "fellow Americans" to the US.

The message was an apparent about-face to last month's tone, when Biden warned refugees not to come to America, a statement that he made amid his team's efforts to contain the border crisis.

"I can say quite clearly don't come over. Don't leave your town or city or community", Biden told ABC News in mid-March, in an apparent address to asylum seekers. He insisted that there had been a surge in immigration "in the last two years", but admitted that the current rise "could be" worse.

The warning was preceded by Homeland Security Secretary Alejandro Mayorkas predicting that before the end of this year, the US may apprehend more migrants on its southern border than it has over the past 20 years.

"The situation at the southwest border is difficult. We are working around the clock to manage it and we will continue to do so. We are on pace to encounter more individuals on the southwest border than we have in the last 20 years", Mayorkas pointed out in a statement.

Biden's move to freeze construction of the border wall was earlier slammed by Trump, who argued that when he was POTUS, the country's southern border was "in great shape – stronger, safer, and more secure than ever before".

© AP Photo / Gregory Bull
Three Migrant Sex Offenders Caught Crossing US Border After Being Deported, Media Says
The ex-POTUS asserted that the US-Mexico border was "working magnificently", claiming the US is now being destroyed on the southern border, which is "a terrible thing to see".

In the hours after Biden was inaugurated on 20 January, he began the process of rolling back many of Trump's policies, issuing executive orders that included halting construction of the border wall on the US-Mexico border and ending prolonged detention and family separations of refugees in America.