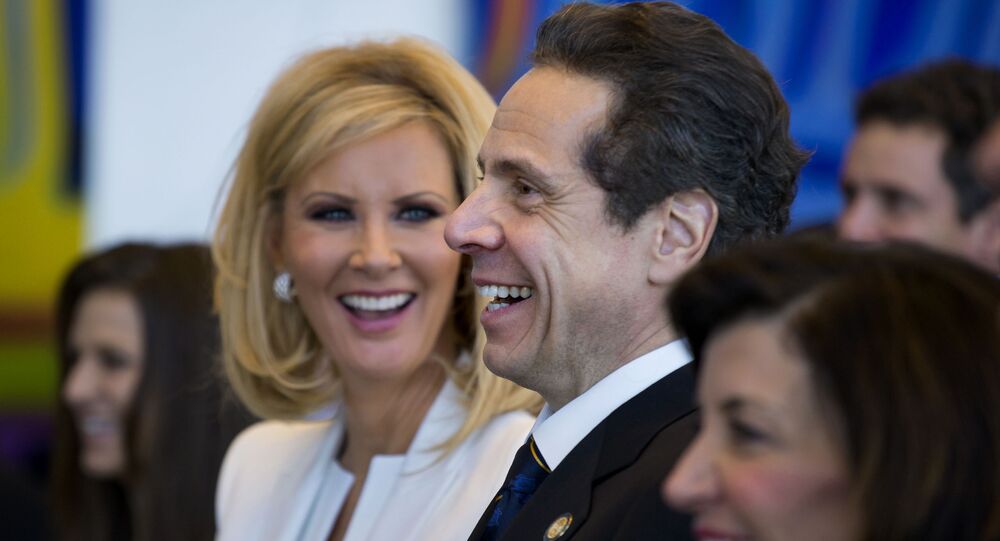 New York Governor Andrew Cuomo is battling at least 10 sexual harassment and misconduct accusations from current and former staffers, reporters, and some random encounters who allege that the politician acted inappropriately towards them in the past – even while he was still dating his long-term lover Sandra Lee.

Several of Andrew Cuomo's former staffers have told the New York Post that they believe the governor was cheating on his girlfriend of 14 years Sandra Lee with some of his employees, with one ex-aide alleging that his infidelity was "an open secret" among his close circle of workers.

"Andrew was sleeping with at least one other woman who wasn't Sandra" before the two officially broke up in 2019 and the famed TV cooking show host moved to California, the ex-staffer says.

Another former aide, who also chose to remain anonymous, told the outlet that State Troopers once witnessed how the governor was leaving the Mount Kisco house he shared with Lee with one staffer in the early morning when they came to pick him up for work.

"There was no reason for this woman to be there so early", the ex-aide said over a suggestion that the two could have been just working together.

But Cuomo's spokesman denied the claims when approached by the NY Post, saying that no staffer has ever spent a night at the governor's Mount Kisco mansion, but some occasionally meet him there in the morning to go to a meeting together.

The New York governor dismissed the "false" allegations that he "had a sexual relationship" with any staff member or "was unfaithful to Sandy".

Cuomo and Lee started dating in 2005, following his divorce from Kerry Kennedy, the mother of his three daughters. The TV cooking-star, who now resides in Malibu since the two broke up in 2019, remains increasingly silent about the string of allegations Cuomo is currently facing from current and former aides, who claim he has been sexually inappropriate towards them during their work with the governor. Some accusations go as far back as 2000, but other alleged victims, including Ana Liss, claim the governor toucher her "lower back" or inquired about her boyfriend while she was working for Cuomo from 2013 to 2015.

Liss says that in her opinion, Lee was "merely an accessory" for the governor, as she was deliberately "kept away" from the politician by staffers "controlling his schedule", as he was busy spending time in Manhattan or throwing "boozy" parties at his mansion.

Lee "was only brought forth in public on certain special occasions", Liss claims. "Given the lack of frequency of their time spent together publicly and privately, it had a performative nature about it. It felt like watching Princess Diana. She [Sandra Lee] is a beautiful, statuesque woman who complemented the governor's gruffness".

© AP Photo / Richard Drew
New York Gov. Andrew Cuomo is accompanied by his girlfriend Sandra Lee as he talks to the press after casting his primary election ballot, at the Presbyterian Church of Mount Kisco, in Mount Kisco, N.Y., Thursday, Sept. 13, 2018

Liss also believes that Cuomo's portrayal of himself as a loving boyfriend - as Lee was battling breast cancer in 2015 - was nothing but a "p.r. stunt" and just "something to add to his credibility as a man and politician who is a proclaimed feminist".

Many of Liss' remarks were scrutinised by Cuomo spokesman Richard Azzopardi.

Ten people have come forward to accuse Andrew Cuomo of sexual harassment and misconduct, with the latest accuser Sherry Vill saying that she was inappropriately touched and kissed by the governor without her consent when he was visiting her flooded neighbourhood back in May 2017.

But Lee's apparent silence about the stream of allegations currently being investigated by attorneys Joon Kim and Anne Clark, at the request of New York Attorney General Letitia James, is "deafening", one insider claims.

"The question is, is Sandra being silent out of grace and dignity, or is she being silenced out of fear of retaliation?", the person argued.

According to the insider, Governor Cuomo is a "toxic" person.

"There's obviously a reason why Sandra moved to California — she literally could not have moved farther away from Andrew. She's on the edge of the Pacific", the source claims.