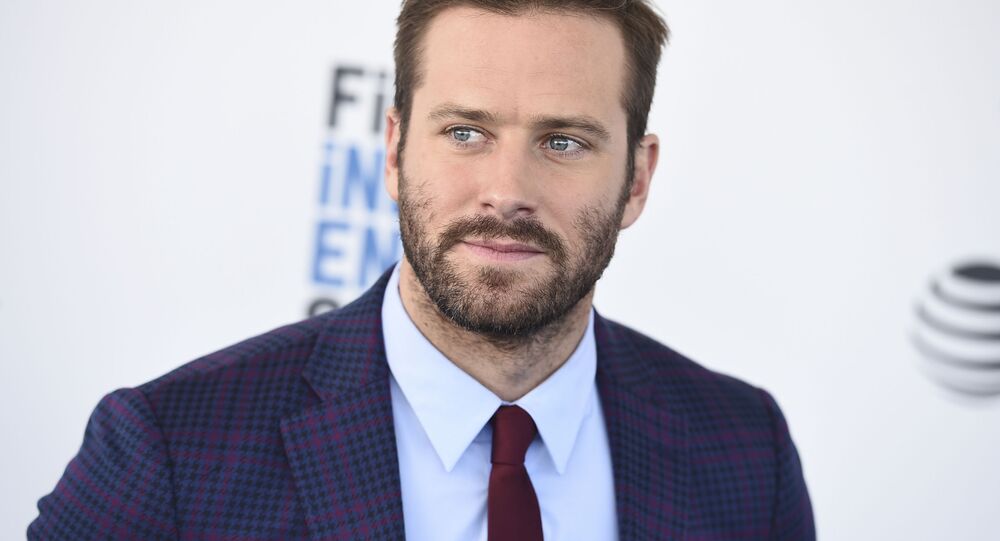 The first allegations date back to early January, when screen grabs were leaked online, purportedly showing the Call Me By Your Name star’s extremely salacious sexts to women. The texts implicated the actor in murky sexual proclivities, which he has since denied.

Armie Hammer has released a statement announcing his decision to exit the Broadway play The Minutes, which is set to be part of the 2021-2022 season after being interrupted by the coronavirus pandemic.

"I have loved every single second of working on The Minutes with the family I made from Steppenwolf," said Hammer in a statement posted to Broadways Best Shows. "But right now I need to focus on myself and my health for the sake of my family. Consequently, I will not be returning to Broadway with the production,” the actor, who is at present under criminal investigation in a sexual abuse case and has in recent months faced accusations of sexual cannibalism, pointed out.

© AP Photo / Jordan Strauss
Model Claims Actor Armie Hammer Was Serious About Removing Her Ribs So He Could Eat Them
A spokesman from The Minutes came up with a statement in response to Hammer's decision saying Armie remains “a valued colleague to all of us who have worked with him on stage and offstage on The Minutes,” adding: “We wish only the best for him and respect his decision.”

Since the first allegations emerged - before the criminal case came around in early February - he has been shown the door by agency WME and has also been forced to quit Amma Asante's thriller Billion Dollar Spy.

Separately, the actor is no longer among the cast of an forthcoming Julia Roberts and Sean Penn drama called Gaslit, which is thought to be a “modern take on Watergate” and is based on the podcast Slow Burn. Back in January, the backlash forced him to drop out of his romcom with Jennifer Lopez, issuing a statement:

“I’m not responding to these bullshit claims but in light of the vicious and spurious online attacks against me, I cannot in good conscience now leave my children for four months to shoot a film in the Dominican Republic,” Hammer said.

The allegations which are at present being investigated by the Los Angeles Police Department concern the purported use of physical force against a woman called Effie (she did not provide her full name).

She claimed Hammer assaulted her for four hours in Los Angeles in April 2017, slamming her head against a wall, thereby inflicting bruises to her face. He also committed  "other acts of violence" on her, Effie claimed.

"During those four hours, I tried to get away but he wouldn't let me," the woman told a press conference last month with attorney Gloria Allred.

"I thought he was going to kill me. Then [he] left with no concern for my wellbeing”, she rounded off her account.

Earlier, in January, unverified screengrabs of extremely lurid text messages allegedly sent by Armie Hammer between 2016 and 2020 were posted by the Instagram account @houseofeffie, which also compiled nearly half a dozen examples of women who claimed to have had an affair with Hammer while he was married (his divorce from his wife was attributed to infidelity). Some of the proclivities outlined in the screengrabs were admittedly murky.

In one, the man said to be Hammer says he itches to “bite pieces off of” the recipient and eat her heart. And in another, he says:

Incidentally, the screengrabs have not been verified, and the Call Me By Your Name star himself has denied their veracity and legitimacy.