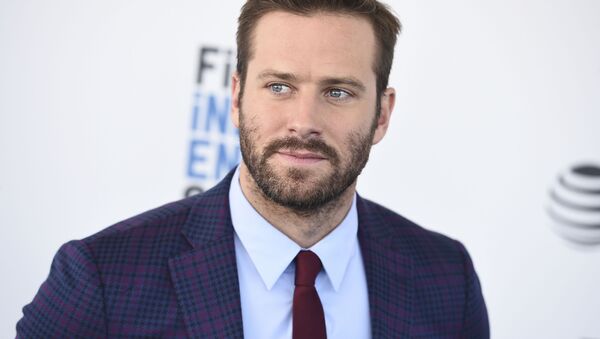 © AP Photo / Jordan Strauss
Subscribe
International
India
Africa
Max Gorbachev
All materialsWrite to the author
The star of Social Network, The Man From U.N.C.L.E., Free Fire and Call Me by Your Name had to drop out of his forthcoming movie with Jennifer Lopez after an Instagram user leaked messages allegedly sent by Hammer, in which the actor spoke about abuse and grisly sexual interests.

Model Paige Lorenze claimed her ex-boyfriend Armie Hammer was "100 percent serious" about finding a way to remove her ribs in order to eat them, the Daily Mail reported citing an interview she gave to Star Magazine. Sputnik has been unable to verify the claim.

"He said he wanted to find a doctor who would remove my ribs. He was telling me you can remove the bottom ribs so he could smoke them, cook them and eat them. He kept saying 'You don't need them'," the model is cited by the Daily Mail as saying.

The 22-year-old claims the actor carved the letter "A" into her skin using a knife and later boasted about it to his friends. She said when their relationship began, at first the actor was "charming" but later introduced the actress to “darker and darker things”, which prompted the young woman to see a therapist after their break-up.

"Consent is really complex, and saying yes to something does not negate the trauma you might be burdened with after the fact," Lorenze said, as quoted by the Daily Mail.

Social media users added fuel to the fire with some speculating that the girl was allegedly covered in bruises when she was dating the actor. This is one of the photos from her Instagram which netizens say is proof of these claims.

Paige Lorenze is the second woman to have made allegations against Hammer.

Vucekovich told the Daily Mail that after their four-month relationship ended she had to undergo a month-long therapy for post-traumatic stress disorder to deal with "the warped relationship".

"He manipulated me – and I liked him, which is the scary part," Vucekovich told the Daily Mail.

Other Accusations and the Actor’s Response

The development comes more than a week after screenshots of messages allegedly sent by him were leaked online. One of the messages shared by user @HouseofEffie reads:

"I need to drink your blood… I need your blood. I crave it. Will you give it to me tomorrow?" reads the other.

The actor dismissed the allegations and dropped out of his forthcoming movie with Jennifer Lopez.

Since then the Daily Mail has obtained videos from the actor’s private account. One of them shows a woman in lingerie on all fours on a bed and the other shows drinking and apparent drug-taking while driving.

Hammer was married to TV personality Elizabeth Chambers for 10 years. The couple are now going through a divorce. Chambers has not commented about the allegations concerning the actor.