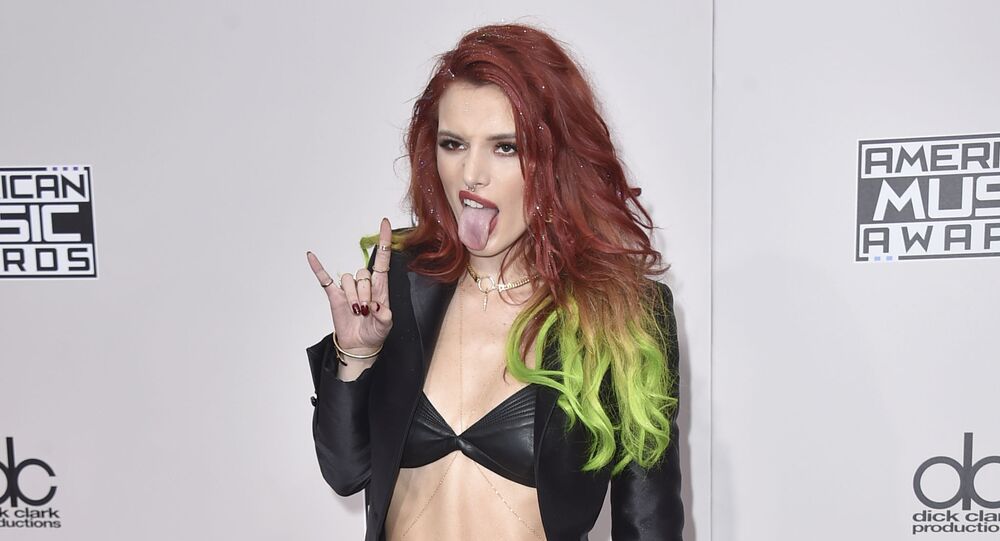 Earlier on Thursday, the name of American actor Armie Hammer suddenly appeared in world trends after his ex-girlfriend accused him of abuse and claimed that he had bizarre cannibalism-related sexual preferences.

American model and actress Bella Thorne defended Armie Hammer against accusations of cannibalism after what is believed to be screenshots of his disturbing sexual DMs went viral over the week.

“I honestly can’t believe this…people are crazy to fake this kinda s–t this poor guy and his kids like leave him and his family alone. No way he’s a freaking CANNIBAL…..”, Thorne wrote in her Instagram stories, calling the viral screenshots "fake".

Thorne's defensive remarks come as Hammer found himself in a middle of a cannibalism scandal, with one group of netizens spewing jokes and memes on allegations of his actions, and another terrified of the purported screenshots in which the actor supposedly shared his troubling fantasies with an anonymous partner.

not bella thorne defending armie hammer and invalidating victims .....there's a place in hell for this girl pic.twitter.com/GvvVxqGdif

​According to the screenshots, which could not be verified, a voice sounding like the actor asks if he could “cut off one of your toes and keep it with me in my pocket so I always had a piece of you in my possession", describing himself as “100 per cent a cannibal.”

When you’re eating dinner with armie hammer and he says you look scrumptious pic.twitter.com/3FAoxGhvtS

Armie Hammer: Hey gorgeous, I’ve bought you some bath bombs, get in the tub.

​A scandal unfolded as his ex-girlfriend, Courtney Vucekovich, told the Page Six tabloid that Hammer sought to break her ribs and "barbecue and eat" her, allegedly subjecting her to emotional abuse.

“He said to me he wants to break my rib and barbecue and eat it,” Vucekovich said. “He says, ‘I want to take a bite out of you.’ If I had a little cut on my hand, he’d like suck it or lick it. That’s about as weird as we got.”

Hammer has reportedly called the allegations "bulls**t", according to the tabloid.

“I’m not responding to these bulls–t claims but in light of the vicious and spurious online attacks against me, I cannot in good conscience now leave my children for four months to shoot a film in the Dominican Republic,” Hammer said in a statement, adding, “Lionsgate is supporting me in this and I’m grateful to them for that.”