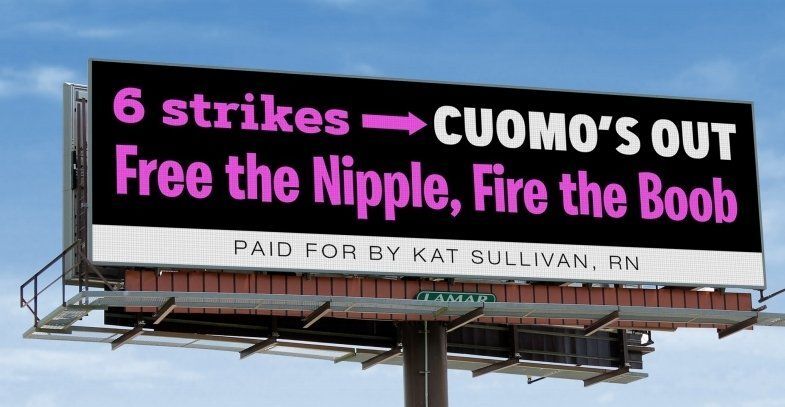 Andrew Cuomo, who now faces impeachment in the state legislature over sexual misconduct, bullying, and conspiracy claims, sparked online speculation that he has a pair of nipple piercings last year when tell-tale shapes poked through his shirt at a press conference.

State residents struggling to keep abreast of the string of sexual harassment claims against the governor — with a sixth woman coming forward on Tuesday — were reminded by electronic billboards paid for by prominent New York rape survivor and activist Kat Sullivan.

​The "boob" jibe has a "ring" of truth to it: speculation that Cuomo has a pair of kinky nipple piercings erupted on social media last year after he appeared at a press conference in a polo shirt — with tell-tale shapes poking through the fabric.

© REUTERS / Mike Segar
Impeachment Looms and Cuomo's Options Dwindle After His Public Refusal to Resign
A spokesman for the governor denied the rumours at the time, saying: "Of course not, sorry, Internet".

The Democrat governor, who frequently sparred with former President and New York City native Donald Trump, is also accused of bullying staff members and already faces calls to quit — or be impeached — for covering up thousands of deaths caused by his policy of discharging COVID-19 patients into care homes.

'There's No Way I Will Resign', Cuomo Says, as Sexual Harassment Accusations Grow