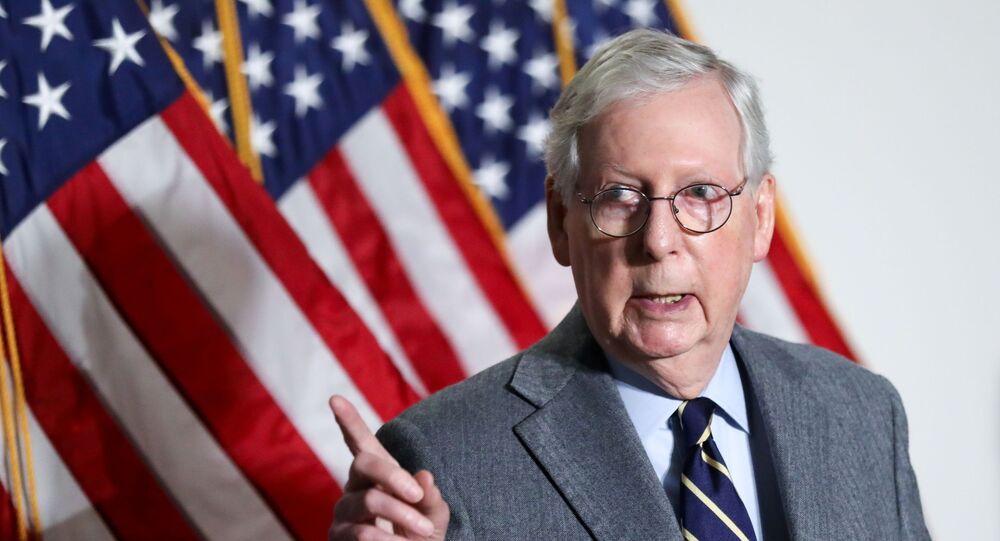 Earlier, Senate Minority Leader Mitch McConnell stirred additional controversy by observing that the former US president, Donald Trump, is “practically and morally responsible” for the deadly 6 January uprising, but refused to condemn him during the final Senate vote on Trump’s second impeachment.

According to Fox News on Thursday, Senate Republican Mitch McConnell would support Trump if the latter became the Republican candidate for the 2024 presidential race.

"There's a lot to happen between now and '24. I've got at least four members that I think are planning on running for president...Should be a wide open race," McConnell noted.

When Fox News host host Bret Baier asked McConnell whether he would back another Trump candidacy, the Republican senator answered "absolutely."

Earlier McConnell criticized Trump, cacknowelding that he is reponsible for the Capitol storming on 6 January which saw five people killed.

"There's no question — none — that President Trump is practically and morally responsible for provoking the events. The people who stormed this building believed they were acting on the wishes and instructions of their president”, he said.

The statement was made right after McConnell on 13 February voted to acquit the former president during the final day of Trump's second Senate impeachment trial.

At the moment, many Republicans reportedly consider Trump the likeliest presidential candidate for 2024. Earlier, Axios reported that Trump will seek to declare himself the "presumptive 2024 nominee" at the annual Conservative Political Action Conference (CPAC), scheduled for 25-28 February.

Trump is expected to speak last at the CPAC this Sunday. He will reportedly talk about the future of the Republican Party and its nominees for the 2022 elections in Congress.