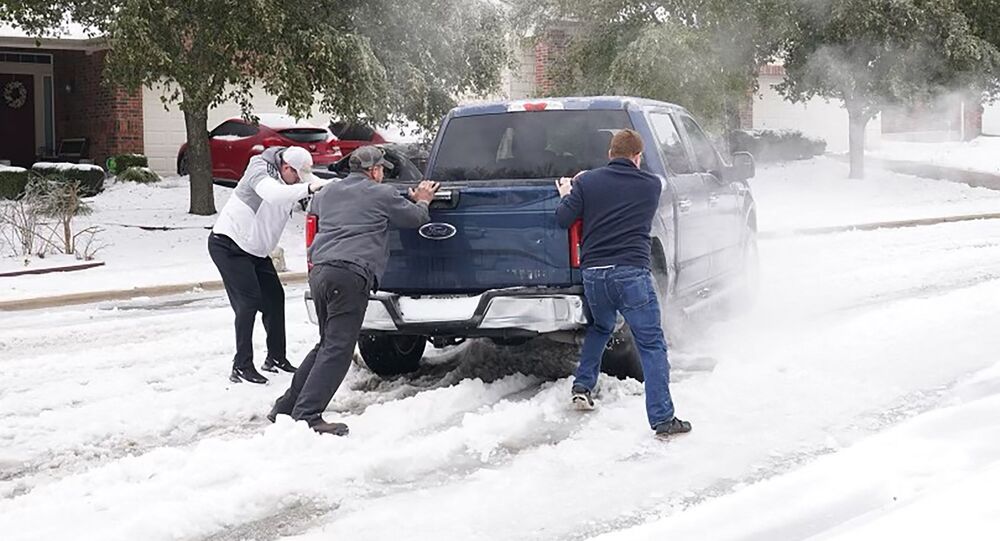 The Lone Star State was hit with unprecedented winter weather this week, with over 2.7 million people left without power and millions more with no water amid a dangerous snowfall and temperatures as low as -18 degrees Celsius. The storm is part of a massive cold front wreaking havoc from Texas in the south to the Rust Belt in the north.

Colorado City, Texas Mayor Tim Boyd has resigned after a backlash over his Facebook post urging city residents to pick themselves up by the bootstraps and prepare for adverse weather independently instead of asking the government to bail them out.

“No one owes you or your family anything; nor is it the local government’s responsibility to support you during trying times like this! Sink or swim, it’s your choice!” Boyd wrote in the since-deleted post.

“If you don’t have electricity you step up and come up with a game plan to keep your family warm and safe. If you have no water you deal with out [sic] and think outside of the box to survive and supply water to your family,” he added. “Only the strong will survive and the weak will parish [sic].”

“If you were sitting at home in the cold because you have no power and are sitting there waiting for someone to come rescue you because your [sic] lazy is a direct result of your raising,” Boyd suggested. “The City and County, along with power providers or any other service owes you NOTHING! I’m sick and tired of people looking for a damn handout!”

David Hoover, Colorado City’s Manager, confirmed to NBC News that Boyd stepped down from his post on Tuesday, without elaborating as to the cause.

The mayor’s post went viral, circulated widely across social media and sparking outrage among Texas residents and people far beyond the state.

This dude is the mayor of Colorado City, Texas.

In a second post where he announced his resignation, Boyd wrote that he was “taken out of context,” saying he would “never want to hurt the elderly or anyone that is in true need of help to be left to fend for themselves,” but stood by his comments about “lazy” residents. He confirmed that he had turned in his resignation, and not signed up ahead of a 12 February deadline to run again in mayoral elections scheduled for 1 May.

“The anger and harassment you have caused my wife and family is so undeserved,” Boyd wrote, reporting that his wife had been fired from her job over his comments. “I admit, there are things that are said all the time that I don’t agree with; but I would never harass you or your family to the point that they would lose there [sic] livelihood such as a form of income.”

Despite the name, Colorado City is not a large community; it has a population of about 1,150 people. The town is situated in Mitchell County in west-central Texas.

© AP Photo / LM Otero
Texas Residents Share Stories of Withstanding Snow 'Armageddon'
The Lone Star State, the second-most-populous in the US after California, has been pounded by extreme weather this week, with about seven million of the state’s 29 million residents reporting problems with their water supply and water purification systems, including burst pipes. The water problem has been compounded by widespread power outages, which have affected over 2.7 million. 29 people have died as a result of the snow and ice storms, with hundreds also suffering carbon monoxide poisoning in attempts to stay warm. Much of the state remains under freeze, storm and winter weather advisories, with some areas seeing up to 4 inches (10 cm) of snowfall.

The Texas freeze is part of a large front of cold weather affecting over a dozen other states, with power outages also reported in Louisiana, Mississippi, Kentucky and West Virginia. However, Texas seems to have gotten the brunt of the storm, with its impact reportedly exacerbated by the state’s decades-long effort to skirt federal oversight in the operation of its power grid.

Here's the #Winter #Storm Severity Index for #today, February 15. Major to extreme impacts are possible from southeast Texas to northern portions of Ohio, as a massive winter storm lifts from the Gulf Coast to the Ohio Valley. pic.twitter.com/q2H9jRVLE3

The state’s oil production has also been affected, with about 3 million barrels per day-worth of production remaining offline as of Wednesday evening.