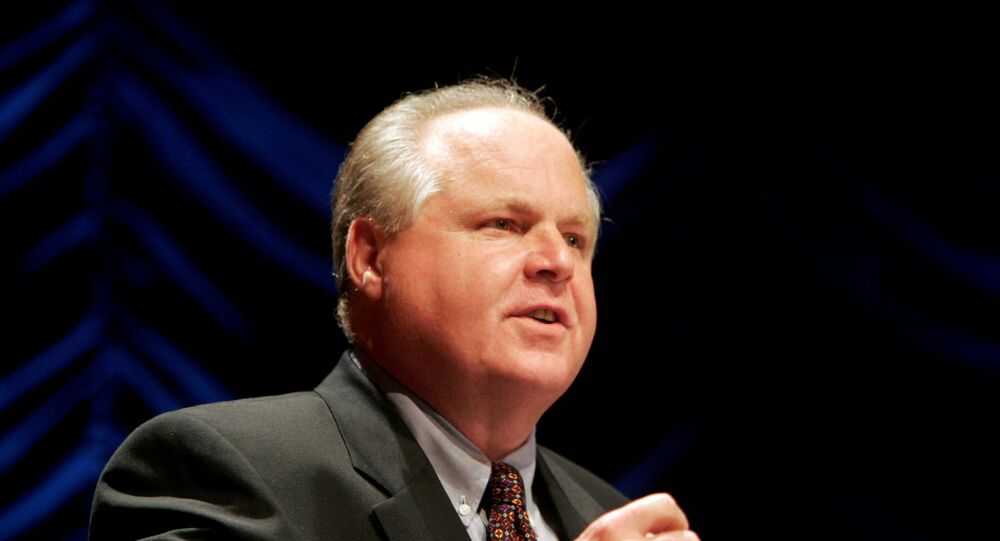 US President Donald Trump awarded Rush Limbaugh the Presidential Medal of Freedom on February 4, 2020, just a day after the right-wing political commentator and talk show host announced that he had been diagnosed with advanced lung cancer.

Limbaugh, the 70-year-old host of the nationally syndicated radio program "The Rush Limbaugh Show," died Wednesday morning at his home in Palm Beach, Florida, according to an announcement made by wife Kathryn Adams.

"Losing a loved one is terribly difficult, even more so when that loved one is larger than life," she said, as reported by Fox News. "Rush will forever be the greatest of all time."

The late radio host delivered an emotional address to his listeners during his last broadcast of 2020, proclaiming that he did not expect to make it through the year.

“Because I have outlived the diagnosis, I’ve been able to receive and hear and process some of the most wonderful, nice things about me that I might not have ever heard had I not gotten sick,” he said. “How many people who pass away never hear the eulogies, never hear the thank-yous?”

In addition to being awarded the Presidential Medal of Freedom in 2020, the 70-year-old radio host also interviewed three US president's on his show, which has been in national syndication for over 30 years.

Limbaugh and his program rose to national attention in the early 90s, when he was featured in TIME Magazine's "Radio: Big Mouths" cover story alongside polarizing radio personality Howard Stern. The story was quick to highlight his language and rhetoric, including his propensity to refer to certain feminists as "feminazis."

During his on-air career, Limbaugh has been accused of sexism, racism and bigotry due to controversial segments on his show, such as his 2007 broadcast of "Barack the Magic Negro," a song that lambasted then-Democratic presidential hopeful Barack Obama's biracial identity and claimed he was “black, but not authentically," which "makes guilty whites feel good."

More recently, Limbaugh made headlines for his continued support of Trump in the wake of the 2020 presidential election.

While the longtime conservative radio personality initially questioned Trump's past dealings with the Democrat Party, he was one of many media personalities who backed the former US president's baseless claims about widespread voter fraud.

Earlier this month, Limbaugh claimed Trump “represents an uprising of the people of this country against Washington, against the establishment, and it had been building for a long time,... since Perot in 1992.... Trump was just the first guy to come along and actually weaponize it.”

He has also floated that the US may be headed toward secession following the results of the November election.

“I know that there’s a sizable and growing sentiment for people who believe that’s we’re headed to, whether we want to get there or not, secession,” Limbaugh said on his nationally syndicated program. “Now, I didn’t advocate for it. I never would advocate for secession. I’m simply repeating what I have heard.”

Shortly after the announcement of Limbaugh's death, Trump called in to Fox News Wednesday and recounted the "incredible night" in which he awarded the radio host with the Presidential Medal of Freedom.

"It was something special, it was an incredible night."

President Trump reminisces about awarding Rush Limbaugh with the Medal of Honor at the 2020 State of the Union address. pic.twitter.com/fWiTwgkW7O

"People, whether they loved him or not, they respected him," the former US president added.

There is Strong Argument for Teachers to be Vaccinated Now so Schools Can Reopen, Analyst Says

'Marilyn Monrowl': This Bird Knows What It's Like To Be a Celebrity