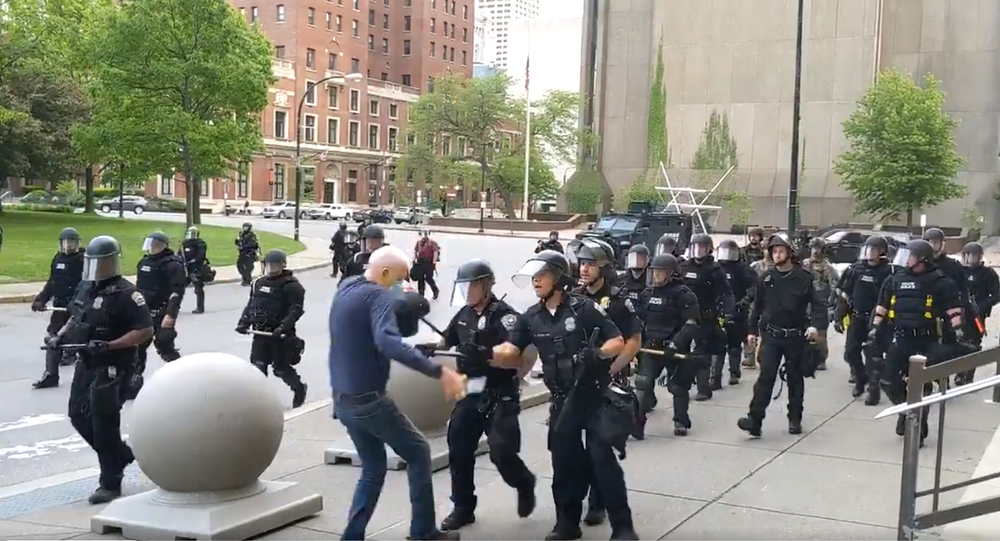 The June 2020 incident involving two Buffalo police officers who shoved an elderly man to the ground during protests in New York City resulted in widespread condemnation of the cops. The violent takedown left the man with a skull fracture and inability to walk, although he later recovered partially.

The decision was announced by Erie County District Attorney John Flynn on Thursday, who said he did everything he could to bring a strong case.

Despite apologizing "for nothing", Flynn outlined that he did not think that "the right thing happened here", insisting that "a crime was committed".

Following the acquittal, the Buffalo Police Benevolent Association noted that they are "extremely pleased" with the grand jury decision, remarking that Torgalski and McCabe "were simply following departmental procedures and the directives of their superiors to clear Niagara Square despite working under extremely challenging circumstances".

​In June 2020, protests against police brutality and police racism engulfed the US, and in NYC in particular, a video of Torgalski and McCabe thrusting Gugino to the ground, after the latter appeared unarmed and walking towards them, immediately went viral. Taken aback by the cops' move as the elderly man lay on the ground bleeding, users lambasted the two for both their takedown and their reluctance to help afterwards.

According to Gugino's attorney, the fall left the elderly man unable to walk at the time, and his skull was fractured.

Both officers were suspended after the incident pending an internal investigation. When facing felony charges, they pled not guilty.

Later, 57 members of the department's Emergency Response Team, the unit that responds to protests and riots, temporarily stepped down from their positions in support of the two - a move that prompted condemnation from many.

The then-president, Donald Trump, suggested that the elderly man might have been an "Antifa provocateur" - something that Gugino denies - and insisted that he "fell harder than was pushed".