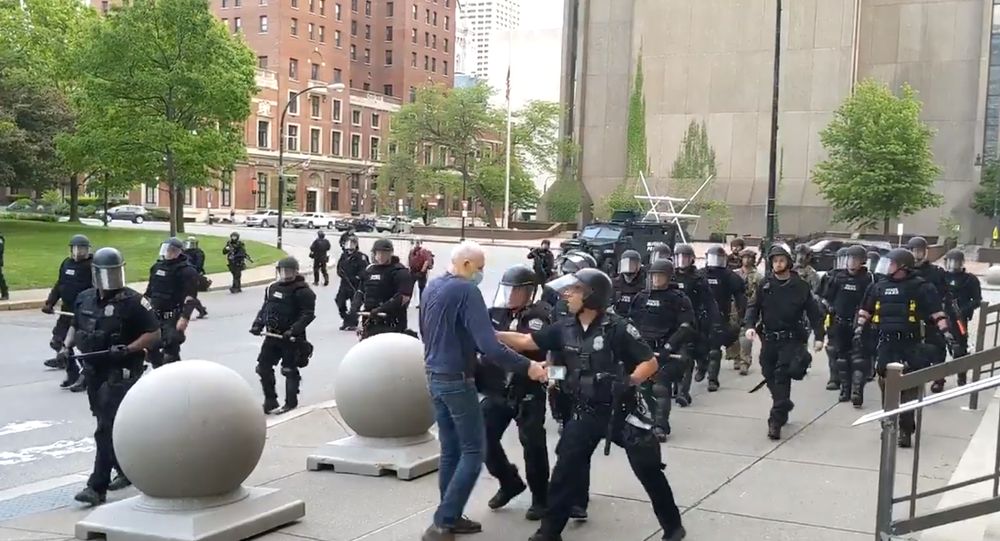 New York is one of the many states that has been rocked by protests against police brutality; protests were sparked by the death of George Floyd, who was killed by police in Minneapolis while being taken into custody.

A graphic video filmed in Niagara Square, Buffalo in upstate New York documents police officers pushing an unarmed man to the ground, causing to  fall on his back. The move apparently injured his head, which started bleeding as the man lied motionless on the sidewalk. One police officer begins to stoop down to check on the man but is pulled away by another cop.

Another police officer then approaches the person video-recording the event and demands that they back away.

Just about an hour ago, police officers shove man in Niagara Square to the ground (WARNING: Graphic). Video from: @MikeDesmondWBFO pic.twitter.com/JBKQLvzfET

He didn’t trip he was shoved by the police pic.twitter.com/AM34ltvnRz

#BREAKING: Buffalo Police Commissioner Byron Lockwood has ordered the immediate suspension of both officers involved in a video circulating tonight of a man pushed by officers after a protest in Niagara Square. A source has told me that man suffered from a possible concussion.

​Erie county executive Mark Polocarz has confirmed that the man was transferred to the hospital and is in stable condition.

I've seen videos of the incident in front of Buffalo's City Hall in which an older protester appears to have been shoved by police, fell backwards and suffered a serious head injury. It sickens me. I've confirmed he is at ECMC in stable condition. My thoughts are with him now.

​Netizens were appaled by the video, especially outraged by the fact that no one tried to help the man.

How can anyone see this and not see how out of control the problem is? The eyes of the entire world are on them, they know everyone is watching, but they can’t stop.

Nobody even rushes to help this poor man!

@markpoloncarz @MayorByronBrown @NYGovCuomo your officers need to be removed from the streets. They are a clear and present danger. Beyond the assault, watch how they all look on as that man bleeds on the street.

Please tell me I didn’t just see a man die

What the? Is that man dead? It sounded like his head cracked on the ground. The one officer wanted to stop and help but was moved along. So disturbing.

​Amid the ongoing protests in all 50 US states and in many major cites, including Buffalo, an aggressive and militarised police presence has been increased and curfews have been imposed, as some of those demonstrating against police brutality in response to the death of George Floyd have turned violent.