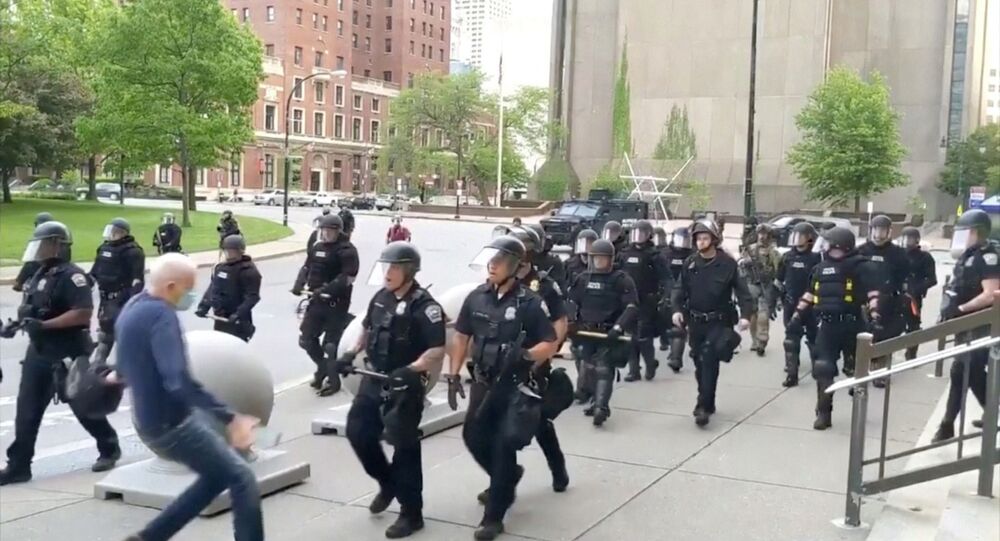 Earlier this month, Martin Gugino, an unarmed 75-year-old activist with the Catholic Worker movement, was hospitalized after he was violently pushed to the ground by two law enforcement officers, who walked away from him as he bled on the sidewalk, during a protest against racism and police brutality in Buffalo, New York.

Martin Gugino, a 75-year-old unarmed peaceful protester who was violently shoved to the ground by Buffalo police officers, has a fractured skull and is unable to walk as a result of the police assault, Gugino’s attorney Kelly Zarcone said on Monday in a statement cited by CNN.

“I am not at liberty to elaborate at this time other than to confirm that his skull was fractured,” Zarcone said. “While he is not able to walk yet, we were able to have a short conversation before he became too tired. He is appreciative of all of the concern about him but he is still focused on the issues rather than himself”.

The elderly man passed a message to CNN through his lawyer saying, “I think it’s very unnecessary to focus on me. There are plenty of other things to think about besides me,” Zarcone quoted Gugino.

The attorney said earlier that he is not expecting any improvement in Gugino’s condition in the near future, at least for this week.

“Barring something unusual and unforeseen, I don't expect much change at all this week,” Zarcone said.

In a graphic video that quickly went viral in early June, two Buffalo city police officers pushed the unarmed and peaceful Gugino to the ground. The elderly man was left motionless and bleeding on the sidewalk as a group of law enforcement officers walked by and ignored him.

The two officers involved in the assault, identified as Robert McCabe and Aaron Torgalski, have been suspended without pay and charged with second-degree assault.

US President Donald Trump commented on the incident claiming, without evidence, that the 75-year-old “could be an ANTIFA provocateur”. Trump stated that the incident “could be a set up”, suggesting that Gugino “fell harder than was pushed”.

The violence took place during a demonstration protesting police brutality and racism in the wake of the killing of an African-American man named George Floyd by white police officers in Minneapolis, Minnesota, after one of the officers knelt on Floyd’s neck for eight minutes and forty-six seconds as the slowly dying victim lay pinned to the ground.