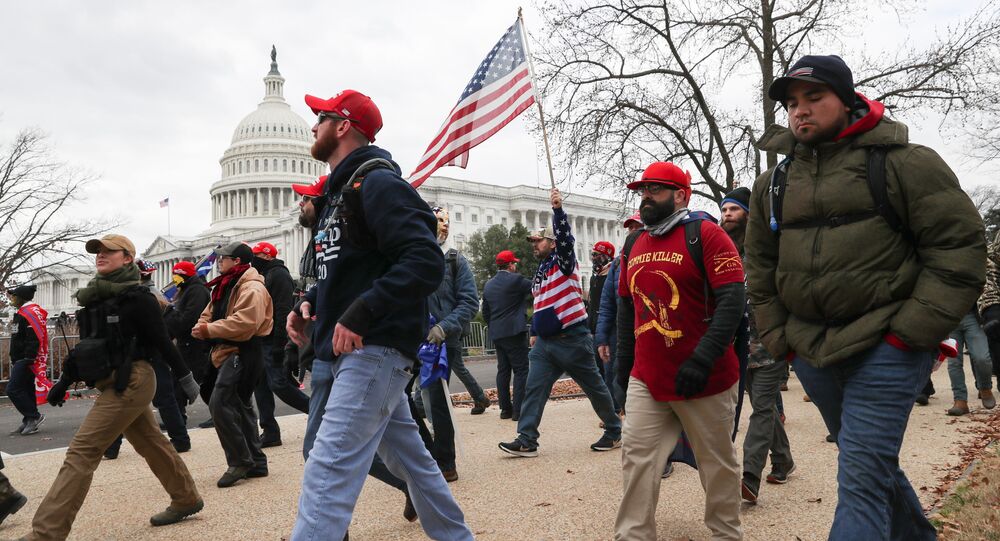 Five members of the Proud Boys were previously arrested for involvement in the deadly January 6 protests.

Two members of Proud Boys group have been indicted on federal conspiracy and other charges in the 6 January Capitol Hill riots.

According to the authorities, William Pepe, 31, was photographed inside the building and Dominic Pezzola, 43, was caught on camera smashing a window.

The men were arrested earlier in the month on federal charges including illegally entering a restricted building. Both have now been indicted in court in the District of Columbia.

“The object of the conspiracy was to obstruct, influence, impede, and interfere with law enforcement officers engaged in their official duties in protecting the US Capitol and its grounds,” the indictment says, alleging that Pezzola confronted a Capitol Police officer, taking his shield and smashing the window.

The charging documents also say that Pepe and Pezzola were members of the Proud Boys, a group of self-described "Western chauvinists."

The acting US attorney for Washington Michael Sherwin said in a court filing on Friday that Pezzola "invested a significant personal effort to take over the Capitol and that he did so in coordination with others."

Violent confrontations between Proud Boys and Antifa groups increased towards the end of last year, as all 50 states – as well as the US territories – officially certified the 2020 presidential election results with the Electoral College giving victory to Joe Biden. Trump refused to concede, claiming the election was rigged.

Following a speech and several Tweets by outgoing president Trump about 6 January "Stop the Steal" rally, thousands of rioters stormed the Capitol building in a bid to prevent Congress from certifying Biden's victory. As a result, five people died and more than 170 cases have been opened by police in connection to the riots, while the US House impeached Trump for "inciting insurrection." Trump has denied the charges, saying that his remarks were "totally appropriate."