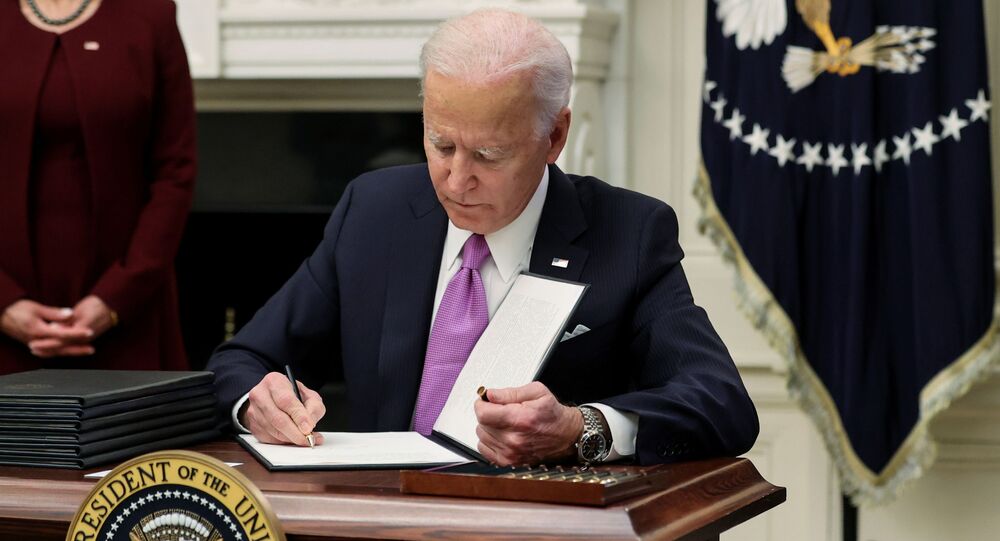 Congressional Democrats are preparing to push for Joe Biden's $1.9 trillion relief plan, with or without the GOP's support, as the package found itself in troubled waters, with Business Insider predicting that it won't be passed until March. Wall Street analyst Charles Ortel has explained hidden flaws in Biden's economic approach.

Republican deficit hawks argue it's premature to be considering Biden's $1.9 trillion package just a month after Congress passed a $900 billion relief measure. Although the Senate's 50-50 tie can be broken by Vice President Kamala Harris, the Dems are still facing a filibuster threat which requires them to convince at least 10 Republicans to act in concert. Meanwhile, Senate Democrats have opted for a budget reconciliation process that would allow them to pass some of the bill's provisions with just 51 votes. Senate Majority Leader Chuck Schumer signalled on 26 January that Democrats may vote on a budget resolution as early as next week to kick-start the process.

The Democratic Party's determination to pass the bill is triggering justified concerns, according to Wall Street analyst, investor and investigative journalist Charles Ortel.

In contrast to Donald Trump, who envisaged stimulus measures in combination with re-opening of the American economy and considerable business tax cuts, Joe Biden's plan to inject more money into the US economy may prove futile as the president has already killed tens of thousands of jobs in the energy sector, has plans to raise taxes on those making more than $400,000 a year, and has yet to re-open the US economy, which has been hit by the coronavirus-related recession.

​The new administration's approach reminds one of stimulus measures promoted by Barack Obama and Joe Biden following the global financial crisis of 2008 which "failed to cure the economy and likely exacerbated underlying structural problems in over-leveraged, expensive government bureaucracies that seem addicted to deficit spending while suppressing key interest rates", according to the Wall Street analyst.

BREAKING: Union leaders have been calling Biden like crazy

‘Wall, pipelines, gas, coal, etc..all of these work sites are closing on a daily basis thanks to his EO's...they're being told to call back in a few weeks, some calls aren't even answered,’ says WH official

​"In 2021, Joe Biden has limited flexibility to give money away – he, Donald Trump, Barack Obama, and George W. Bush borrowed trillions of dollars that were largely misspent and or wasted on foreign wars and gauzy-sounding programmes", says Ortel. "Eventually these gigantic sums must be reduced and repaid."

The American Recovery and Reinvestment Act of 2009, signed by Obama on 17 February 2009, put around $800 billion into the pockets of American families and small businesses. Meanwhile, the Federal Reserve, led by then-chairwoman Janet Yellen, carried out its quantitative easing (QE) plan, having bought $4.5 trillion worth of government bonds and mortgage-backed securities between 2008 and 2015.

However, as US business journalist John Crudele noted in his 2014 op-ed, while keeping the economy afloat, QE failed to boost growth in private sector wages and incomes. Furthermore, due to artificially-low interest rates, investors had no other choice but to move their money into the stock market, which soared, creating a bubble. While the richest 1% of the US population applauded the rise in stock prices, QE actually became "an invisible tax on savers" as "every dollar that has benefited a borrower during QE has come out of the pocket of a saver in the form of a lower return on their assets," argued Crudele.

© AP Photo / Evan Vucci
Vice President Joe Biden points at President Barack Obama during the State of the Union address to a joint session of Congress on Capitol Hill in Washington, Tuesday, Jan. 12, 2016.

Assessing Obama's stimulus effort, Laurence Brahm, an economist and international lawyer, points out that quantitative easing money "did not go into badly needed infrastructure" but "went right into the hands of the same bankers who had created the mess to begin with". What's worse, Joe Biden is seemingly seeking to do the same with his $1.9 trillion relief package and an additional $2 trillion climate plan, Brahm suggests in his opinion article for China Daily, adding that Obama-era Fed chair Yellen, who has already been sworn in as the 78th Secretary of the Treasury, has announced an "act big" policy.

"America's profligacy 'works' because no market yet exists that is deep enough and transparent enough as the market for US dollars," says Ortel. "I would watch the market in credit default swaps on US government debt securities closely for signs that professional investors are concerned about what could happen when Biden and Democrats control key levers of government."

US Needs to Pay Down Its Total Debt, Bring Jobs Back

A key step towards prosperity is spending less than you earn and investing the difference wisely, the Wall Street analyst underscores, adding that "proponents of unregulated globalism miss much when they encourage foreign-sourced supply chains, and deficit spending across sectors".

Under the current circumstances, one approach might be to motivate American companies to produce and provide services primarily inside US borders, using a mixture of incentives (lower corporate income tax rates) and penalties for operating in nations where patents and trade secrets are not secure, according to him.

Yesterday, Biden signed an executive order blocking the Keystone Pipeline.
That means he blocked:
- 3,000 direct construction jobs
- 40,000 indirect jobs
- $2 billion in economic activity
- Greater relationship between the US and Canada

​"What we need to do in America is to pay down our total debt, motivate multinational entities to bring jobs back inside our borders and put government entities on crash diets, which is the polar opposite of the latest Biden plan," stresses Ortel. "Joe Biden is addicted to the government swamp. He has a weak, conflicted team and little chance of getting America's private sector back on a growth track".

​Meanwhile, the essential problem that economists have when scoring stimulus programmes is that Gross Domestic Product (GDP) is a deeply flawed measure of true economic activity, argues the investor, suggesting that the better way to think about total debt levels is to compare these to consumption and to investment within the private sector, nation by nation.

"In the private sector, incomes are earned selling goods and services to customers who normally have choices, so there should be competition to slow the increase of prices for these goods and services," he explains. "In the public sector there is no competition at all, and workers are unionised, meaning their number and their compensation, including benefits, is virtually impossible to control. Worse, central banks irresponsibly have suppressed benchmark interests, particularly since December 2008 so total levels of debt are way past prudent levels."

Still, it appears that the problem started emerging even before that, according to Ortel, who laments the fact that the United States has allowed state, local and federal government entities to spend with abandon since 2000, under the Clinton administration. Meanwhile, it has turned out that over the last 20 years, workers paid for about 40 hours per week find themselves hooked on the internet, using "free time" to stay connected and to work, without fair compensation, the analyst notes. In addition to this, "even in the United States (in theory a rich nation) a small minority has accumulated meaningful financial wealth, while a majority is saddled directly and indirectly with towering debts".