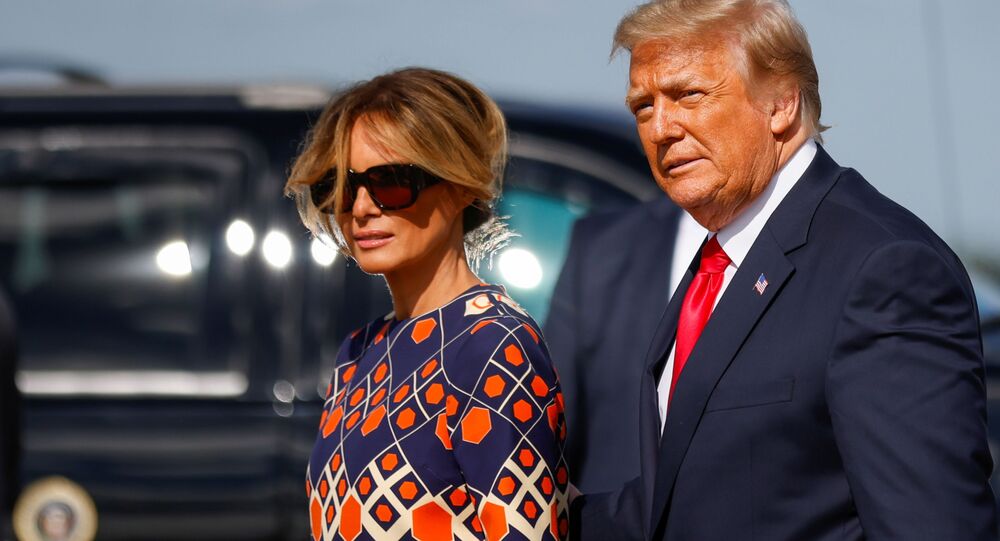 Melania Could Reportedly Get $50 Mln, Custody of Son Barron if She Splits with Trump

Speculation has been rampant over the future relationship between Donald Trump and his wife, Melania Trump as the property tycoon wrapped up his four-year tenure at the White House, with sources citing numerous reported instances of ‘frosty’ moments between the couple.

Melania Trump could receive a payment of up to $50 million and be awarded custody of her teenage son Barron, 14, if she divorces her husband, ex-President Donald Trump, top lawyers are cited as saying by the Mirror.

Speculation has always been rife over the marital arrangement between the couple, with many wondering about the nature of their prenup, and if it got renegotiated during Donald Trump’s first presidential campaign, or after he won the presidency in 2016.

If Melania Trump were to remain in the marriage for a long time after exiting the White House, she could renegotiate her prenup again, believes New York divorce lawyer Jacqueline Newman.

Donald Trump and the former First Lady Melania Trump moved back to the property tycoon’s Mar-a-Lago resort in Florida as Democrat Joe Biden was sworn in on 20 January as America's 46th president.

As the couple disembarked Air Force One at Palm Beach's airport, the ex-FLOTUS seemed particularly stone-faced, dismissing the cameras and striding ahead while her spouse stopped to pose for reporters.

During his two previous divorces, Trump had chiefly adhered to the prenup.

Ivana Trump was the businessman’s first spouse, whom he married in 1977. The couple had three children: Don in 1977, Ivanka in 1981 and Eric in 1984. The Czech-American businesswoman and media personality contested their marital arrangement, and in 1991 The New York Times reported that the divorce settlement included $14 million, a 45-room Connecticut mansion, an apartment in the Trump Plaza, and the use of Mar-a-Lago for one month a year, besides $650,000 annually for alimony and child support.

Marla Maples was the second wife of Donald Trump, whom he married in 1993. The couple had one daughter, Tiffany, and divorced in 1999.

How long will it take #MarlaMaples to write a tell-all? Strike while the iron is hot, beat #Melania to the punch. She knows #trump will be broke and maybe in jail within a year. Might as well cash in. pic.twitter.com/GKBWmEtGDA

​The woman also contested her prenup, and is suggested as having been awarded around $2 million.
Currently, experts suggest the stakes are much higher.

The Trumps' marital relationship has reportedly been marred by numerous ‘awkward moments’, with some sources even claiming the couple were sleeping in separate bedrooms during their White House stint.

Former White House aide and The Apprentice contestant Omarosa Manigault-Newman alleged that Melania Trump was "counting every minute" until her husband was no longer president so she could divorce him, as she dished the dirt on the couple in her memoirs, Unhinged: An Insider's Account of the Trump White House, published in 2018.

Curious about the book? Take a look at this excerpt from @OMAROSA Manigault Newman's "Unhinged": https://t.co/ldvlXcVr4t pic.twitter.com/5WF4k852jg

​The Trumps have "a transactional marriage" and things are so bad they sleep in separate bedrooms in the White House.

Former friend and adviser to the ex-FLOTUS, Stephanie Winston Wolkoff, echoed similar claims in her book, Melania and Me: The Rise and Fall of My Friendship With the First Lady, out in 2020.

Divorce experts suspect the former fashion model, born in Slovenia, would be in a much more favourable position in the event of a divorce than Trump’s first two wives.

"I am guessing that she will receive actual cash payments as well as properties. Should she move back to New York City, he will be providing housing for her, whether it means her retaining a property in her own name or that he will provide her with an apartment to live in, which he would own, until their son is emancipated, which is 21 in New York,” Jacqueline Newman, a managing partner at the Manhattan law firm of Berkman Bottger Newman & Rodd, was cited by the outlet as saying.

As for Melania Trump’s own assets, which she would also retain, the expert speculated they might be ranging between “$20 million and $50 million".

According to Newman, the Trumps most likely a “title dictate” prenup, which means all assets in the former television personality’s name are his, while those in Melania Trump’s name are hers.

However, the following 12 months "will be very telling" as to how their marriage plays out, adds Jacqueline Newman.

Furthermore, the ex-president faces a Senate trial after being impeached by the House for a second time, and could face legal action as a private citizen.